The COVID-19 pandemic added severe financial strain on a North American upstream industry that was already reeling under billions of dollars of debt. With WTI climbing past $40/bbl, most exploration and production firms (E&Ps) have been able to keep their head above water, but unless prices strengthen further about 150 more E&Ps will need to seek Chapter 11 protection through 2022, a Rystad Energy analysis shows. 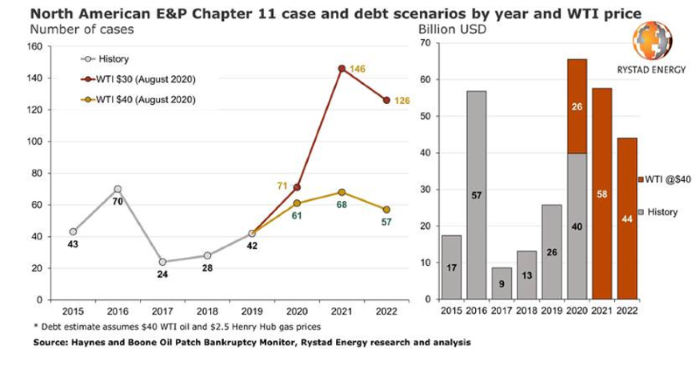 The number of filings so far is lower than what was recorded in the previous downturn, particularly in 2016, but total debt for the filings in the first 7 months of the year for both E&Ps and OFS players is already at the same level as the full year of 2016 at $70 billion. Looking at the average debt per company, 2020 seems to be a clear outlier at $1.2 billion. This is 160% higher than the average debt of $460 million recorded in the 2015–2019 period and twice as much as the 2017 level, which was the second-highest in terms of average debt in a year.

Both E&Ps and OFS Chapter 11 cases exhibit the same dynamic this year with the average debt for an E&P at $1.25 billion and for an OFS company at $1.19 billion. The OFS sector usually has lower debt than E&Ps, as the former in the US is punctuated with small suppliers and service providers, whereas the capital structure of smaller E&Ps is typically fully family-owned. The average debt for the OFS sector is higher this year because of several large bankruptcies.

Our E&P Chapter 11 model is based on a cash flow analysis covering about 10,000 active North American oil and gas E&Ps. The model is designed to present a macro-level outlook rather than look at individual company insights, as the capital structure for a majority of small and private E&Ps is based on assumptions and matches the actual number of Chapter 11 cases.

While an improvement in oil prices toward $40/bbl WTI saved a significant number of E&Ps and prevented early Chapter 11 filings in June–July, the current price environment is in no way sufficient for a large number of E&Ps in the medium term. As hedging programs set at WTI $50/bbl+ expire in the second half of this year, we anticipate greater financial pressure on the industry unless WTI prices recover further.

Artem Abramov is Rystad’s head of shale research. He can be contacted at artem.abramov@rystadenergy.com.