In a recent analysis, the company said outside of underlying asset economics and breakevens, midstream creditworthiness is exposed to operator solvency and the ability to raise capital. The company also assumes midstream providers remain exposed to operator bankruptcies from an assets and capital perspective, despite optimism that midstream company contracts will hold up in court.

The number of bankruptcies in 2020 hasn’t eclipsed 2Q 2016 during the previous economic downturn, but the intelligence group said it is unclear if bankruptcies this year will trigger more consolidation because liquidating assets from bankruptcy is less favorable. 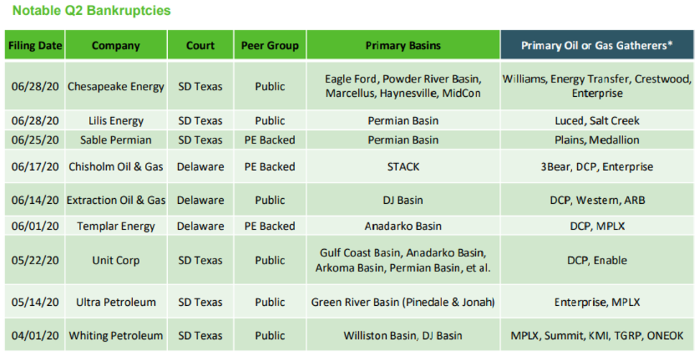 The bond market remains open, albeit for large, creditworthy counterparties such as integrated oil companies. Enverus notes the open bond market benefits midstream providers because operators can still invest capital during a down cycle.

Bond issuances hit the highest quarterly total amount to date and were up 423% year over year to $74.8 billion with integrated oil companies accounting for 56% of capital raised and 83% of the rated issuances. Upstream and midstream accounted for $14.5 billion and $10 billion, respectively.

Outside of the bond market, equity capital is near all-time lows as billions of dollars of debt maturities approach and cap liquidity and activity. Public and private equity markets are mostly closed, alongside all-time lows in equity valuations. Upstream operators have shown thin interest in public markets, while private equity is taking a “wait and see” approach to the global markets. 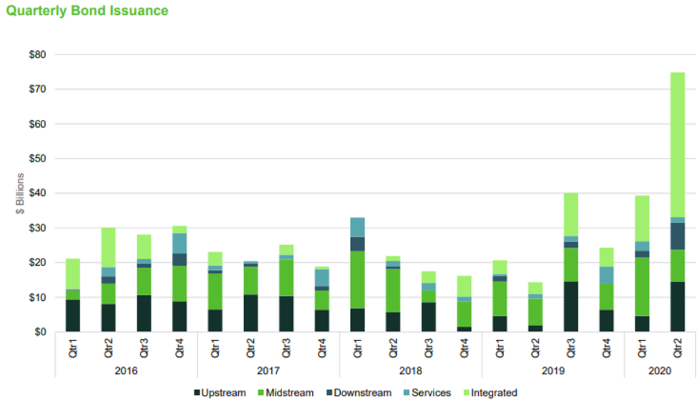 Approximately $6.1 billion of capital was raised in Q2 by integrated companies, with BP accounting for $5 billion of the total. Although capital raises were up from just over $1 billion in Q1, Enverus said the resilient bond market helped the industry’s liquidity as cost outpaces revenue.

Other than the bond market, there may be other alternatives companies can examine as well, according to Andrew Dittmar, senior mergers and acquisition (M&A) analyst for market research at Enverus.

“Raising capital, particularly in a way that doesn't overburden the balance sheet, is obviously a key concern for independent E&P companies right now,” said Dittmar. “Beyond traditional debt options, we will likely see (companies) pursue sales of noncore assets that are likely to draw market interest”

Examples of this include mineral/royalty interests, midstream infrastructure, or one-off unique assets like mineral and fee acreage such as Oxy’s $1.33 billion land grant sale in August for its trona (a mineral refined into soda ash) development in Wyoming, Dittmar explained.

“In addition, companies are likely to look at joint venture or drillco (structured return thresholds) options. Those could be with domestic private capital providers looking at alternatives to deploy into energy or foreign companies looking to gain exposure/experience in US unconventionals,” he said.

While debt maturities may have put a ceiling on activity, limited M&A also contributes to the overall negative sentiment.

Enverus said the lack of M&A shows companies with weak balance sheets are likely to lead to Chapter 11 filings rather than consolidation. Total Q2 M&A deal values dropped to $2.6 billion, the third-smallest quarter by value in the past 10 years, while no obvious buyer group has emerged since the downturn.

But, the company stressed the recent Chevron/Noble Energy merger announcement could trigger activity and corporate consolidation in 2H among better-positioned E&Ps or integrated companies such as Chevron looking to utilize their capital and boost their position. Dittmar also cited the smaller recent Southwestern/Montage deal as an example of the industry’s need to consolidate.

The return of M&A activity may benefit certain midstream operators, while continued moves will likely focus on proved, developed, and producing cash flow opportunities such as gas positions that transacted in Q2 with considerable synergies.

Recovering M&A activity is partially based on economic recovery combined with a decrease in drilling activity raising commodity prices, according to the analyst group. The market gradually started moving up from yearly lows with crude back at $45/bbl and gas at $2.80/MMbtu for a 12-month strip .

Dittmar said crude prices are approaching a level where respectable M&A flow was in the past. The case for gas is stronger and may see slightly more interest in doing deals in the 2H 2020.

“While it may take time, we expect slow and steady consolidation in the industry,” Dittmar said. “The major disruptions in 1H, both commodity price uncertainty and the challenges of changing business to adapt to the pandemic, also likely left some backlog of transactions that will be made up as conditions normalize.”

Until the industry is back to averaging higher transaction values, Dittmar said M&A is likely to have modest asset acquisitions with large pieces for private capital and occasional larger deals from public company consolidation or a larger acquisition by a foreign buyer.

Other concerns still remain for midstream companies, such as contractual risk, especially after the recent bankruptcy filing from shale-gas driller Chesapeake Energy.

After an upstream bankruptcy such as Chesapeake’s, operators can reject an existing contract under Section 365 of the bankruptcy code, which states a debtor in possession may reject burdensome executory contracts subject to court approval.

Recent court rulings for Badlands Energy and Alta Mesa Resources, both of which filed bankruptcies, however, were in favor of the midstream companies regarding existing gathering and processing (G&P) contracts. Those cases found G&P contracts “form real property covenants running with the land” and are not executory contracts subject to Section 365.

Since the 2016 Sabine Oil and Gas ruling, which authorized rejection of G&P contracts, midstream companies have included favorable contract languages in gathering agreements, such as dedications of mineral interest in the unproduced hydrocarbons.

Firm transportation agreements on long-haul pipelines, however, are still considered executory contracts. A layer of protection does exist for operators of interstate natural gas transmission pipelines, however. In June, the US Federal Regulatory Commission (FERC) issued a declaratory order that holds concurrent jurisdiction with bankruptcy courts pursuant to the Natural Gas Act.

The biggest concern for large-scale midstream companies like Williams, according to Enverus, is the capital reinvestment risk of a noncreditworthy producer. Williams invested significant capital to gather production for Chesapeake, with several billion dollars in assets to which Chesapeake has dedications.

Williams’ takes 8% of its total revenue from Chesapeake, but the company is optimistic the Chesapeake reorganization would be a net positive as it reemerges with more capital, which was previously spent on paying off interest.

Another company that has agreements with Chesapeake, Crestwood Energy Partners, has less than 15% of their total 2020 cash flow tied to Chesapeake. Crestwood said new contract language, a favorable dedication, and “covenants running with the land” all make it difficult for the contract to get rejected.

In addition to favorable contract language in gathering agreements, Enverus said midstream company revenues are diversified enough to survive through the downturn through risk mitigation.

Regardless of how or when the global economy picks up, midstream companies still must worry about the upcoming presidential elections in November and its potential impact on regulations.

Regulatory Concerns Remain at the Forefront

Until recently, permits for interstate pipeline developers typically came after filing with FERC for a Certificate of Public Convenience and Necessity. Regulatory concerns remain an issue for developing projects and have even stopped some operations.

Some developments on hold due to regulatory pushback include the Constitution Pipeline and the PennEast Pipeline. The Constitution Pipeline was expected online in April 2016, but investment was halted after lengthy regulatory issues. The PennEast Pipeline was expected on line March 2016, but the company continues working with authorities to move the project forward with an alternate route.

More recently in July, the Tesoro High Plains Pipeline was ordered to shut down for the first time in more than 60 years of operation due to right-of-way disputes, while the Dakota Access Pipeline (DAPL) was asked to shut down operations.

DAPL won an administrative stay from the US Court of Appeals for the District of Columbia, while the court determines the future of the pipeline as an environmental impact statement (EIS) is prepared. That process can take over a year.

Enverus said If DAPL shuts down while the US Army Corps of Engineers prepares an EIS, southbound volumes on the Energy Transfer Crude Oil Pipeline would be affected, also impacting waterborne exports of Bakken crude from the Sunoco Logistics and Phillips 66 terminals in Nederland, Texas. Eastbound volumes on the Bayou Bridge pipeline from Nederland to St. James, Louisiana, may also be affected if DAPL is forced to halt operations.

On the natural gas side, the Atlantic Coast Pipeline (ACP) was cancelled on 5 July.

“The regulatory pushback mainly impacting the energy market has been coming from environmental groups and not the current administration,” said Maria Sanchez, manager of strategy and analytics at Enverus.

Sanchez noted the key issues center on pipelines crossing lakes and national forests, among others. DAPL crossed Lake Oahe in South Dakota, while ACP would have crossed the Appalachian Trail.

“This environment is a reckoning for any developers of large midstream projects,” said Sanchez. “The ability for the opposition to create cost overruns and delays via regulatory battles is stronger than ever.  Likely leading to pause in the announcement of any large projects for the foreseeable future.”