Platforms may be similar in characteristics and configuration, but the cost of decommissioning them can differ significantly depending on location, climate, and regulations. The recent oil-price slump boosted interest in decommissioning, and Rystad Energy therefore developed a decommissioning cost-estimating tool to help exploration and production companies (E&Ps) and service firms prepare for the coming decommissioning wave.

In its most recent analysis, Rystad Energy estimated that the cost of removing a steel platform in the North Sea, excluding subsea infrastructure, is more than twice the cost of the same task in Southeast Asia. The study is based on two similar steel platforms, one in each region, located in 60 m of water with four piles, a topside weight of 1,500 tonnes, and a jacket weight of 800 tonnes.

Facility removal for the platform described above would cost $22.35 million in the North Sea, compared to $9.08 million in Southeast Asia, mainly driven by the higher spread rates as well as weather conditions which can represent a significant operational challenge. 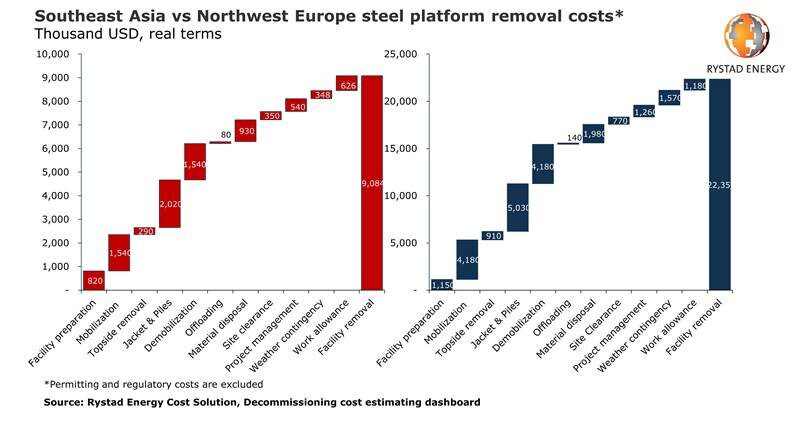 Removal costs include elements such as heavy-lift vessels, support barges and tugs, and cutting and diving crews, which would be mobilized to the fields for the decommissioning operation. The entire topsides would be removed in one piece, as we have accounted for a heavy-lift vessel with enough lifting capacity.

The substructure removal is the costliest phase of the demolition process. It depends on several factors such as the age of the platform, water depth, climate conditions, structure weight, the number of lifts required, and the number of piles. For this study, as the structure is in less than 100 m of water and weighs less than 2,000 tonnes, we have assumed that the four piles would be cut below the seabed and the structures would be removed in a single lift. The structures would then be transported to shore for disposal using a transport barge.

For the Southeast Asian field, a derrick barge with a 2,000-tonne lift capacity would be mobilized from Singapore, requiring 2 days to reach the field’s location. In the North Sea, a dynamic-positioning vessel would be required instead of a derrick barge, as it is better suited to the volatile winds and waves in the region.

The dayrates for a dynamic-positioning heavy-lift vessel are on average more than 50% higher than for a derrick barge with the same lifting capacities. To estimate the same mobilization time, we have assumed that a dynamic-positioning vessel would be mobilized from Rotterdam and require 2 days to reach the field, but it is worth noting that mobilization from farther away is not uncommon in this region.

The removal cost per platform can also vary within the same region depending on the time and scale of the decommissioning campaign. Removing multiple facilities at the same time can help optimize costs by spreading the mobilization and demobilization costs across different assets.

In addition, flexibility around timing can allow for more attractive rates. Rystad Energy expects vessel rates to hit bottom in 2021 before starting to rise again. As the material-disposal cost is heavily dependent on the price of steel, flexibility around the disposal time could help bring down costs further by waiting to dispose of the steel until steel prices are high.

With more than 280 assets approaching the end of their lifetime, Southeast Asia faces a surge in decommissioning in the years ahead. Most of the offshore platforms due to be retired in the region at present have less than 3,000 topside tonnes and are in less than 75 m of water.

Most Southeast Asian countries do not have fully developed decommissioning legislation in place, and decommissioning projects are therefore dealt with on a case-by-case basis. For example, Petronas implemented a rigs-to-reef solution for two platforms at the Dana and D-30 fields off the coast of Malaysia in 2017.

On the other hand, the North Sea represents a more mature market where regulations governing the removal of offshore structures are more formalized and consolidated. Consistent with the OSPAR Decision 98/3, facilities must be fully removed in the North Sea. This prohibits dumping or leaving in place of disused offshore installations, effectively requiring that they are completely removed to be reused, recycled, or disposed of on land.

Sara Sottilotta is an energy service analyst for Rystad. She can be contacted at sara.sottilotta@rystadenergy.com.