In the early years of offshore oil exploration and production, discoveries were typically large and resulted in economically robust projects despite their uncertainty. As key production areas matured, the size of oil discoveries decreased and the industry looked at new investment opportunities.

Among the less attractive opportunities was the development of smaller oil fields, which can be risky due to minimal benefit-cost ratios and geological uncertainty. In smaller fields, fewer appraisal wells are usually drilled before development, resulting in more subsurface uncertainty.

While the economic downturn of 2020 has many projects on hold across the oil and gas industry, the development of marginal fields can still be an attractive investment if operational flexibilities and more information gathering allows for project optimization.

This requires new solutions to make small discoveries commercial amid unknown technical and market conditions, according to Semyon Fedorov, Norwegian University of Science and Technology.

In the technical paper SPE 201300 presented at the SPE Virtual Annual Technical Conference & Exhibition (ATCE) in October, Fedorov and his team sought to reproduce an investment problem oil companies face before developing a marginal oil field.

The paper shows how the value of flexibility from a staged field development strategy can be accounted for by optimizing the drilling strategy under technical, cost, and market uncertainty within a real options framework. It also shows how decision makers can use additional information from a project’s initial stage to improve future development by optimizing the decision to drill optional production wells.

Staged Development as a Solution

Breaking a project up into several stages can help with subsurface uncertainty when additional appraisal programs are too costly, said Fedorov. By doing this, operators invest in production drilling sequentially instead of drilling all potential wells before the first oil.

Information gathered during the initial production phases may help operators to optimize the number and placement of remaining wells to be drilled at later stages.

Staged development can also cut down on drilling optional wells in case of an unfavorable reservoir or oil-price scenarios, which would save on drilling cost. This would help decision makers defer additional capital investment until the second stage.

Price uncertainty makes it difficult for managers to change the course of a project at any given time, which is why a real options and decision analysis can be beneficial.

“At each decision point operators should be able to evaluate if it’s optimal to drill optional wells now, better to postpone the decision until later, or avoid additional drilling,” Fedorov said. “A real options approach allows to optimize the decision by accounting for multiple uncertainties and enables the decision maker to partly hedge against downside risks of a marginal development in case of unfavorable conditions.”

After drilling initial wells of the staged development strategy, operators gather and process the production and reservoir performance data to learn about the subsurface unfamiliarity. Based on that data after stage 1, the decision maker could expand production by drilling more wells or postpone the decision until the next step.

“It may take several steps before a decision is made to expand, which is why a real options analysis (ROA) is needed to optimize the decision,” he said.

To account for potential reservoir conditions in the methodology, a synthetic model (Olympus benchmark case) was used.

The study extended the methodology presented in a related technical paper Real Options Approach For A Staged Field Development With Optional Wells (Fedorov et al. 2020) by including Olympus in a modeling approach to obtain realistic hydrocarbon-production profiles with unpredictability, combined with water-production and water-injection volumes to estimate operating expenses.

The Olympus project is a synthetic model based on an oil field in the North Sea. The field is 9 km×3 km, bounded on one side by a boundary fault. The reservoir, which has 16 layers modeled, is 50-m thick.

In addition to the boundary fault, six minor faults exist in the reservoir. The model consists of two zones separated by an impermeable shale layer. 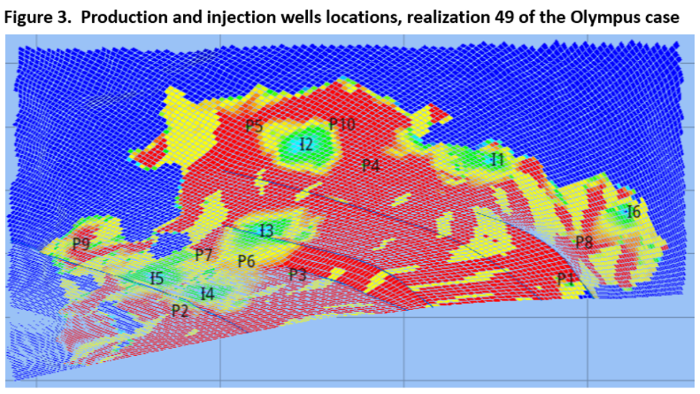 The team ran field production optimization of 50 development scenarios using FieldOpt, an open source software. This allowed development of a field-production forecast with water-injection and water-production rates, based on several realizations of the Olympus case. The team then captured reservoir downside risk and upside potential, helping the operator to optimize its development plan during the production stage.

Another unknown factor taken into consideration was the oil market, which can impact investment. The price modeling was based on a method presented by Schwartz & Smith (2000). SPE 201300 discusses the modeling in detail.

For the case study presented in Fig. 1 below, it is assumed the project will be in the engineering and construction phase for 4 years after reaching an investment decision. After seven production wells are drilled before stage 1, production starts in year 5. After 3 years of operations, the operator can decide to expand.

It is assumed the decision maker has the option to expand from year 7–9.

To Drill or Not To Drill?

SPE 201300 found in 48.1% of the cases, the optimal decision is to avoid drilling optional wells, which shows a phased drilling strategy can favorably impact project development and value under substantial subsurface uncertainty. These results also support the findings of Fedorov et al. (2020).

Fedorov noted the operator is expected to recover slightly less oil under the staged development due to the expansion optimization, but the flexibility increases project value.

The team concluded a staged development may be something oil companies can use when approaching risky investments and other appraisal programs are unreasonable. As part of the further research, the team also said it plans to test the proposed methodology on a real field development case, which requires more extensive work with reservoir models.

The two companies have collaborated since 2015 on various projects, but COVID-19 brought Velentium and Oasis Testing together for a unique purpose—to quickly ramp up the manufacturing capacity for critical, life-saving ventilators.