The Dakota Access Pipeline received the regulatory go-ahead from the US Army Corps of Engineers at the end of July, clearing the way for continued work through four states to complete the 1,172-mile, 30-in. diameter pipeline that will connect the Bakken and Three Forks production areas in North Dakota to Patoka, Illinois. The pipeline is projected to be in service by 4Q this year.

Dakota Access, a subsidiary of Energy Transfer Partners, said the USD 3.78-billion project will be the Bakken’s largest oil pipeline, transporting 450,000 B/D with a capacity as high as 570,000 B/D of the Bakken light sweet crude oil to a market hub outside Patoka, where it will join existing pipelines to deliver the oil to refineries and markets on the US East Coast and the Gulf. 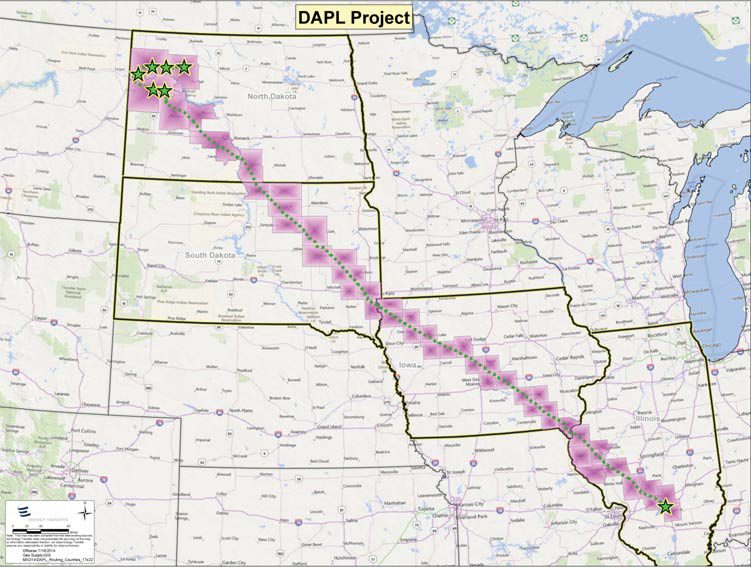 In June, Iowa was the last state to approve construction on the pipeline and work started then; in the other three states, work began in May.

The company highlighted the benefits of the pipeline in reducing the current use of rail and truck transportation to move Bakken crude oil. The volume of oil production has strained the transportation options in the upper Midwest. A lack of rail cars to move grain out of South Dakota has magnified the problem. For example, tariffs on grain rail cars have increased from USD 50 to nearly USD 1,400 per car—shaving up to USD 1 from every bushel of corn shipped. (The commodity price of corn is USD 3.40/bushel at time of writing.)

The company continues to face opposition due to the pipeline’s proposed route, which includes multiple crossings of the Big Sioux, the Missouri, and the Mississippi rivers. In addition to the environmental concerns, property owners have fought the granting of eminent domain, and the Standing Rock Sioux tribe in North Dakota contends that the pipeline will twice pass under the Missouri River, which provides drinking water and irrigation to the tribe.