The Unexpected Challenges in an FPSO Mooring Project 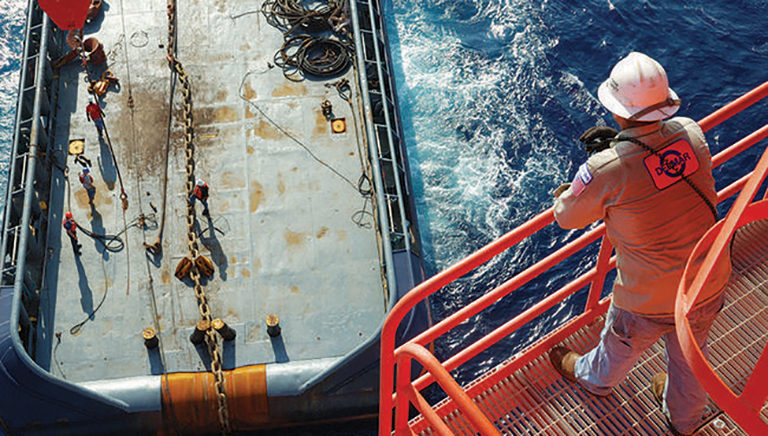 Delmar Systems was contracted to perform maintenance on the nine-leg, external turret mooring system of the FPSO Serpentina, a floating production, storage, and offloading  (FPSO) vessel operating offshore Equatorial Guinea. The vessel is also the single point of export for the Jade and the Zafiro Producer facilities .

Robert Garrity, a chief engineer at Delmar Systems, explained that the FPSO Serpentina had been in production for about 10 years, so the mooring system was within its 15-year design life. The original plan was to change out the top chain, wire rope, and ground chain segments that were worn or damaged by corrosion.

He said a remotely operated vehicle inspection showed broken wire strands on four of the nine lines. In addition, there had been some chafing of the top chain segment of three lines, where the chain had rubbed against the vessel’s hull.

The damage to the spiral strand wire rope was attributed to corrosion. The damaged segments would be replaced with sheathed rope to extend its life. Other than that, the plan was to exchange “like-per-like.” In all, five of the lines would be replaced.

At that point, it seemed to be a routine project. But then, the ROV discovered something that was not routine.

There was evidence of significant trenching around the system’s suction pile anchors. The trenching was present in varying extents around all the nine pilings.

A sonar sweep revealed variations in the trenching ranging from 4 m to 7 m in depth, and from 25 m to 40 m in length. Six of the mooring lines had trenches that were within 3 m of the piles.

The trenching was believed to be caused by “high amplitude motion of the ground chain.” According to OTC paper 25449, the chains’ interaction with the seabed was observed by the ROV.

Considering that the piles were connected to the ground chain at a depth of 9 m, the observed trenching significantly reduced the holding capacity of the system.

The discovery dramatically changed the scope of the work. Instead of a like-per-like change out of five lines, Delmar would be redesigning and replacing the entire mooring system, including the anchors, while the FPU remained on station and on production.

Working with multiple contractors, the mooring system was replaced with off-the-shelf components in only 6 months.