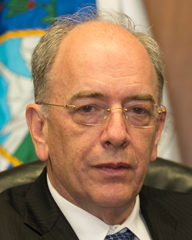 Petrobras announced the re-election of Pedro Parente as its chief executive officer (CEO). In a meeting held on 26 March, the company's board of directors extended Parente's contract for two additional years. Parente was elected CEO on 31 May 2016. Prior to that, he served as CEO at Bunge Brasil from 2010 to 2014. Parente began his career working for Banco de Brasil in the early 1970s and also worked for the Brazilian government in the 1990s and early 2000s. He served as chief minister for the Civil House and Executive of the Brazilian Ministry of Finance from 1994 to 2002. In March 2001 he was acting Minister of Mines and Power and in 1999 he was Minister of Planning, Budget, and Management. From 2003 to 2009 he served as chief operating officer at Grupo, a Brazilian media company.

Parente holds a degree in electrical engineering from the University of Brasilia.