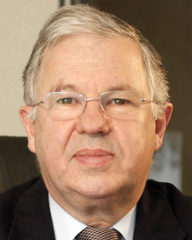 De Chateauvieux began his career as a financial controller for l’Union des Transports Aériens (UTA) in Paris, after which he joined Boston Consulting Group in Paris where, for 3 years, he worked as a consultant in business

strategy and executive management. In 1979, he was appointed CEO of Bourbon, ultimately helping the company transition from its historic business activities to a focus on offshore marine services. He holds a degree from the Institut Supérieur de Gestion (ISG) de Paris and an MBA from Columbia University.

Bodénès joined Bourbon as marketing and business manager for offshore in 2002. In 2005, he was appointed deputy CEO of the company before becoming executive vice president of the offshore division in 2010. Since January 2011, he has served as executive vice president and COO. He holds a degree from ENSIETA (French Navy High School of Naval Engineering) and an MBA from HEC Paris (Hautes Etudes Commerciales).