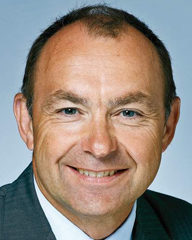 Jan Arve Haugan has been appointed as CEO of Aker Energy, a joint venture between Aker and TRG effective 1 March. Haugan is currently president and CEO of Kvaerner, having served in that position since its demerger from Aker in 2011. He joined Norwegian Hydro as chief engineer in 1991 and has held several management positions in Hydro’s oil and gas projects and operations, and more recently in the aluminum business. From 2007 to 2009 he was director of technology and global smelter operations. In 2009, he became CEO of Qatar Aluminum. Haugan was Hydro's project owner and technology provider for Qatalum in Hydro, before joining Qatalum as CEO. He holds an MSc. in construction management from the University of Colorado.