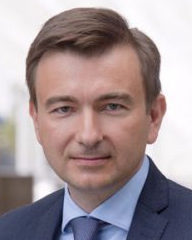 Nexans appointed Christopher Guérin as its CEO. He has been with the company since 1997, and since 2014 he has served as a senior executive vice president, Euope and Telecom/Datacom, Power Access Business Groups for the company. Guérin began his career with Linde Group in 1995 before joining Alcatel Cables, which became Nexans in 2001, in the metallurgy division where he held various sales and marketing directorship positions. He is a graduate of ESDE/American Business School, and has also followed the INSEAD Management Acceleration Program.