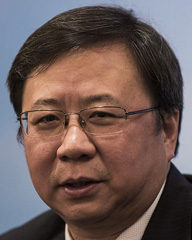 Yang Hua was appointed chief executive officer and redesignated as executive director of the China National Offshore Oil Corporation (CNOOC). Yang has more than 30 years of experience in petroleum exploration and production. From 1982 to 1992, he served in a number of positions at the CNOOC Research Center, including director of its field development department and manager of the reservoir engineering department. From 1993 to 1999, he served as deputy chief geologist and acting director for CNOOC’s overseas development department.

Yang has also worked as CNOOC’s senior vice president, chief financial officer, executive vice president, and from 2011 to 2015 he served as its director and president. He holds a BS in petroleum engineering from the China University of Petroleum and an MBA from the Sloan School of Management at the Massachusetts Institute of Technology.