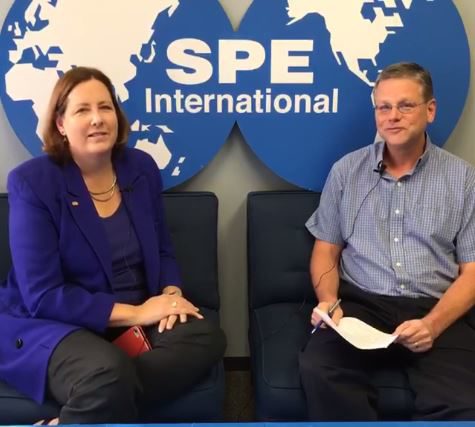 Judah took office as the 2017 SPE President at the SPE Annual Technical Conference and Exhibition recently held in Dubai. In the SPE Facebook interview, Judah shared her goals for the presidency, her plans for travel to various SPE sections and conferences in the coming year, how the downturn will affect the industry, and her strategy to steer SPE during these challenging times.

Judah offered advice to students about handling the downturn, explaining the cyclical nature of the industry. She pointed to the big crew change happening in the industry, which can provide young professionals opportunities for career growth. “The intersection of computer science and petroleum engineering, big data, and data management” are what Judah foresees as the next big thing, which young professionals as a generation can quickly adapt to.

Judah listed environmental stewardship and project management as the technical topics she plans to focus on during her tenure. “Capital discipline” is one of the lessons that can be learned from this downturn, said Judah, while explaining how it can benefit both capital-intensive national oil companies and international oil companies, as the investment amounts are big and thus the stakes are high, as well as small producers like shale producers, as they don’t have much to fall back on.

As the first SPE woman president in more than a decade, Judah said she plans to make additional time during her meetings to offer guidance to women who look up to her as a role model. “Being visible and being accessible” is how she described her leadership style in guiding young women in the industry.

A Texas A&M University graduate, Judah said her involvement with SPE began when she completed the SPE student membership form given to her during the Introduction to Engineering class at A&M and that her membership will reach a 40-year milestone next year. She said “connectivity and interactiveness via digital media will be a big difference” in the coming years at SPE, citing OnePetro’s success in sharing technical information digitally.

At the end of the session, Judah answered questions submitted live by SPE members through the Facebook comments feature. Questions revolved around the hiring of fresh graduates by companies, her plans to visit their section, and handling of the downturn.