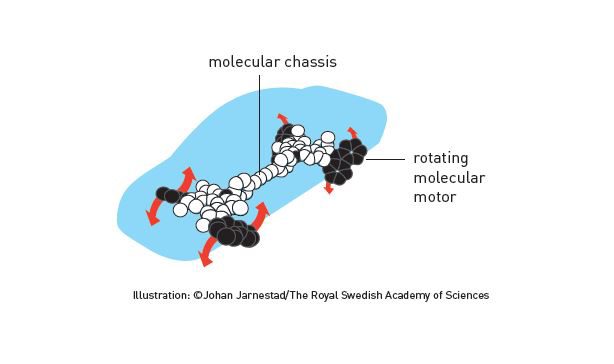 The Nobel Prize in Chemistry was recently awarded to Jean-Sauvage, J. Fraser Stoddart, and Bernard L. Feringa for “the design and synthesis of molecular machines.” Highlighting developments in molecular machinery with movable parts such as lifts that can lift by 0.7 nanometers and motors powering nanocars, the award winners’ research may be mistaken for science fiction. These latest developments in chemistry, however, may well be the early steps to molecular engineering emerging as a revolutionary technology. Below is an excerpt from the press release issued by the Nobel Foundation on the winners and their research. The full version can be read here.

In the mid-20th century, as part of efforts to build increasingly advanced molecules, chemists were attempting to produce molecular chains in which ring-shaped molecules were linked together. The person who succeeded would not just create an amazing molecule, but also a new type of bond. Normally, molecules are held together by “covalent bonds” in which atoms share electrons. The dream was instead to create “mechanical bonds,” where molecules are interlocked without the atoms interacting directly with each other.

The major breakthrough came in 1983. Using an ordinary copper ion, a French research group, led by chemist Sauvage, took control of the molecules.

Gathering molecules around a copper ion

As often happens in research, inspiration arrived from a completely different field. Sauvage worked with photochemistry, in which chemists develop molecular complexes that can capture the energy contained in the sun’s rays and utilize it to drive chemical reactions. When he built a model of one of these photochemically active complexes, he suddenly saw its similarity to a molecular chain: two molecules were intertwined around a central copper ion.

This insight led to a dramatic turn in the direction of Sauvage’s research. Using the photochemical complex as a model, his research group constructed one ring-shaped and one crescent-shaped molecule so that they were attracted to a copper ion (Fig. 1). The copper ion provided a kind of cohesive force that held the molecules together. In the second step, the group used chemistry to weld together the crescent-shaped molecule with a third molecule so a new ring was formed, thereby creating the first link in a chain. The researchers could then remove the copper ion, which had served its purpose.

Thanks to the copper ion, Sauvage was able to increase the yield to an impressive 42%. Suddenly, molecular chains were more than just a curiosity.

Sauvage soon realized that molecular chains (called “catenanes,” from the Latin word for chain, “catena”) were not only a new class of molecule, but that he has also taken the first step towards creating a molecular machine. In 1994, his research group also succeeded in producing a catenane in which one ring rotated, in a controlled manner, one revolution around the other ring when energy was added.

When Fraser Stoddart developed one of the molecular creations that is the foundation of the Nobel Prize in Chemistry, he also utilized chemistry’s potential for designing molecules that are attracted to each other.  In 1991, his research group built an open ring that lacked electrons, and a long rod, or axle, that had electron-rich structures in two places (Fig. 2). When the two molecules met in solution, electron-poor was attracted to electron-rich and the ring threaded on to the axle. In the next step, the research group closed the opening in the ring so that it remained on the molecular axle. He had, with a high yield, created a “rotaxane:” a ring-shaped molecule that is mechanically attached to an axle.

Since 1994, Stoddart’s research group has used various rotaxanes to construct numerous molecular machines, including a lift (2004, Fig. 3), which can raise itself 0.7 nanometers above a surface, and an artificial muscle (2005) where rotaxanes bend a very thin gold lamina.

Producing motors that continually spin in the same direction has been an important goal for the art of molecular engineering. Many different attempts were made in the 1990s, but first across the line was Dutchman Bernard (Ben) L. Feringa.

In 1999, when Feringa produced the first molecular motor, he used a number of clever tricks to get it to spin in one and the same direction. Normally, molecules’ movements are governed by chance; on average, a spinning molecule moves as many times to the right as to the left. But Feringa designed a molecule that was mechanically constructed to spin in a particular direction (Fig. 4).

The molecule was composed of something that can be likened to two small rotor blades, two flat chemical structures that were joined with a double bond between two carbon atoms. A methyl group was attached to each rotor blade. These, and parts of the rotor blade, worked like ratchets that forced the molecule to keep rotating in the same direction. When the molecule was exposed to a pulse of ultraviolet light, one rotor blade jumped 180° around the central double bond. Then the ratchet moved into position. With the next light pulse, the rotor blade jumped another 180°. And so it continued, round and round in the same direction.

The first motor wasn’t exactly fast, but Feringa’s research has optimized it. In 2014 the motor rotated at a speed of 12 million revs per second. In 2011, the research group also built a four-wheel drive nanocar; a molecular chassis held together four motors that functioned as wheels. When the wheels span, the car moved forward over a surface (picture on the top of the article).

A molecular toolbox to build upon

The groundbreaking steps taken by Sauvage, Stoddart, and Faringa in developing molecular machinery have resulted in a toolbox of chemical structures that is used by researchers around the world to build increasingly advanced creations.

Away from equilibrium—toward a new and vibrant chemistry

An important part of the development that has resulted in the Nobel Prize in Chemistry  is that researchers have driven molecular systems away from what is called equilibrium. All chemical systems strive for equilibrium—a lower energy state—but this is somewhat of a stalemate. We can take life as an example. When we eat, the body’s molecules extract the energy from the food and push our molecular systems away from equilibrium, to higher energy levels. The biomolecules then use the energy to drive the chemical reactions necessary for the body to work. If the body was in equilibrium, we would be dead.

Just like molecules of life, the researchers’ artificial molecular systems perform a controlled task. Chemistry has thus taken the first steps into a new world.