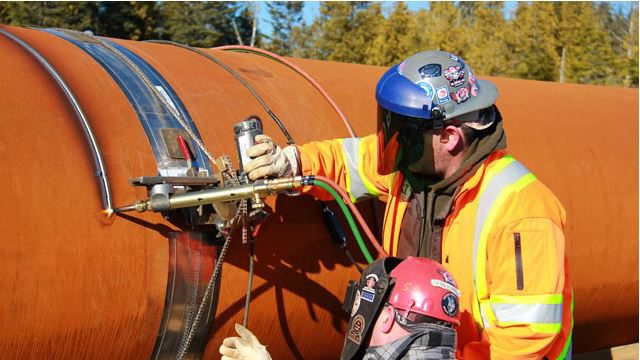 From the TWA Editors: In this day and age, the world charges forward with a hunger for new technology and groundbreaking innovation, and there is less praise and attention that goes to maintaining and optimizing current infrastructure to meet our needs, both energy and otherwise (listen to the Freakonomics Radio podcast episode entitled In Praise of Maintenance for more on this topic). We are subject to the same “Silicon Valley” bias in the oil and gas industry. In recent years, tens of conferences and millions of research dollars have been dedicated to hydraulic fracturing and horizontal drilling technologies, particularly in the United States, leaving enhanced-oil-recovery and other “maintenance projects” on the sidelines. We wanted to highlight one such maintenance project, the Energy East Pipeline, which utilizes and builds upon existing infrastructure. We sought out the perspective of Rob Sillner, the project director for this massive project.

My name is Rob Sillner, and I am the project director of Energy East. I bring to this project 25 years of experience in the energy pipeline industry. My role helping lead the development of the Keystone Pipeline project in the mid-2000s is indeed instructive as we prepare Energy East. Notably, both projects involve the conversion of existing gas pipeline to liquids service, and the construction of tank terminals specifically designed to optimize the transport and storage of the products we safely move to market for our customers every day. Since Keystone went into service in 2010, it has safely delivered close to 1.5 billion bbl of oil from Alberta and Saskatchewan to markets in the US. The Energy East Pipeline involves the conversion of another existing TransCanada gas pipeline to oil service, as well as the construction of 1500 km of new pipeline.

With a capacity of 1.1 million B/D, Energy East will eliminate the need to import foreign crude oil to refineries in Quebec and New Brunswick, which currently import hundreds of thousands of bbl of oil from countries such as Venezuela, Saudi Arabia, Nigeria, and the US every day. With a marine export terminal planned in Saint John, New Brunswick, Energy East will also help get Canadian crude oil to more international markets, thereby enriching the Canadian economy as a whole.

A key reason for converting an existing pipeline is that it allows existing underutilized large infrastructure to be repurposed for continued benefit. Compared to building a new crude oil pipeline, converting a pipeline already in the ground greatly diminishes the impact on the environment and to the people living nearby.

Of the 4550 km of pipeline that makes up the Energy East project—running from Hardisty, Alberta, to Saint John, New Brunswick—roughly 3000 km of the line involves the conversion of existing natural gas pipeline, which is part of TransCanada’s Canadian Mainline system. Due to shifting supply markets for natural gas, the line capacity we will convert for Energy East is currently under-contracted, and therefore can be optimized by turning it into an oil pipeline, as we have previously done with the Keystone Pipeline system. The converted portion of Energy East will extend from Burstall, Saskatchewan, to Iroquois, Ontario.

To determine the current state of the pipeline, a thorough in-line inspection program employing state-of-the-art detection technologies will be conducted over the entire conversion section. These inspections provide engineering teams with a comprehensive millimeter-by-millimeter assessment of the pipe from the inner wall through the steel itself to the outer wall and the protective exterior coating.

Once all that information is gathered, an investigation process identifies any potential anomalies within the pipeline and assesses the appropriate corrective measures. The anomalies are then completely remediated, typically by replacing pieces of pipe. Finally, in order to actually move crude oil in the line we will need to build new pump stations along the route. The locations of these pump stations are determined through hydraulic analysis and the assessment of impacts to the surroundings. The pipeline will also need new safety valves, the locations of which are determined based on an exhaustive process to optimize their effectiveness.

The Energy East project includes several delivery points, including two oil refineries in Quebec. In order to achieve this, the pipeline will need to cross the Saint Lawrence River at a location just west of Quebec City. There are several different methods for crossing waterways. Using a trenched crossing by excavating and installing the pipeline in the river bed and banks was rejected because of the environmental impact to the water course and the expected difficulties in constructing in a river with marine traffic.

In terms of trenchless crossing designs, there are three techniques to choose from: horizontal directional drilling, microtunneling, or a tunnel. Each of these techniques uses a drilling method whereby the only surface disturbance occurs at the entry and exit location of the drill path. After carefully reviewing these options from a technical and environmental perspective, Energy East proposed to cross the Saint Lawrence River using a tunnel. To accommodate the width of the river and avoid sensitive ecological areas along the shoreline, the tunnel will be approximately 4.4 km in length. It will be located about 2.5 km west of an existing tunnel crossing for the Trans-Quebec & Maritimes natural gas pipeline, which was installed in 1995.

One of the key variables affecting the success of a tunnel of this length is the type of soil or bedrock where the tunnel is to be constructed. Geotechnical and geophysical surveys have been completed to identify the conditions in the areas where the tunnel is to be installed. The Energy East Pipeline will travel through a concrete tunnel, which will be constructed at least 30 m beneath the bottom of the river, in solid, stable bedrock. This means there will be no excavations in the water course or on the banks of the river.

At the end of the line, Energy East will end its 4550-km path at the proposed Saint John tank terminal. This facility will be situated adjacent to existing facilities including Irving Oil’s Canaport terminal as well as Canaport LNG terminal. The Saint John tank terminal will be an oil storage facility and will be able to deliver oil from the Energy East Pipeline to Irving Oil’s refinery which has a daily capacity to process 320,000 bbl. It will also be able to accumulate cargoes for delivery onto tankers through the proposed Canaport Energy East marine terminal.

The Saint John tank terminal will include 22 storage tanks with a total capacity of 13.2 million bbl. Each tank will be built to hold 600,000 bbl, and will measure 257 ft in diameter and 70 ft in height, and will each be equipped with an external floating roof. Marine loading systems that include pumps and custody transfer meters to measure the oil will transfer the crude cargoes from the tanks to crude oil tankers, which can range from Aframax vessels with a capacity of 700,000 bbl to very large crude carriers with a capacity of more than 2 million bbl.

The terrain around Saint John is characterized by sharp slopes with frequent rock outcroppings. To accommodate the terrain, the terminal has been tiered into groups of four and six tanks to take into account the natural topography of the site, and decrease blasting and civil development requirements. A containment berm with an impermeable liner will be constructed for each tank lot to provide a secondary layer of containment.

Management of emissions from the tank terminal is a principal consideration in its design. The external floating roof is a very important safety and environmental component which significantly reduces the release of oil vapors into the atmosphere. Floating roofs are continually in contact with the oil surface, eliminating the majority of the vapor space (space between the roof and the oil) where vapors can accumulate. They are equipped with a double seal system to further reduce the release of vapors from the sidewalls. The storage tanks and roofs are painted white in order to reduce the absorption of heat, which also helps to further reduce vapor production.

The Energy East Pipeline project brings together technological experience and know-how to fulfill the need for additional pipeline capacity to safely move Canadian crude oil to domestic and overseas markets. This CAD-15.7-billion project is supported by long-term delivery contracts with oil shippers who are committed to seeing Energy East become a reality. We look forward to seeing the regulatory review move forward and to continue our dialogue with Canadians about this project, which represents the safest, most efficient, and most environmentally respectful way to move the oil we all need and use every day.