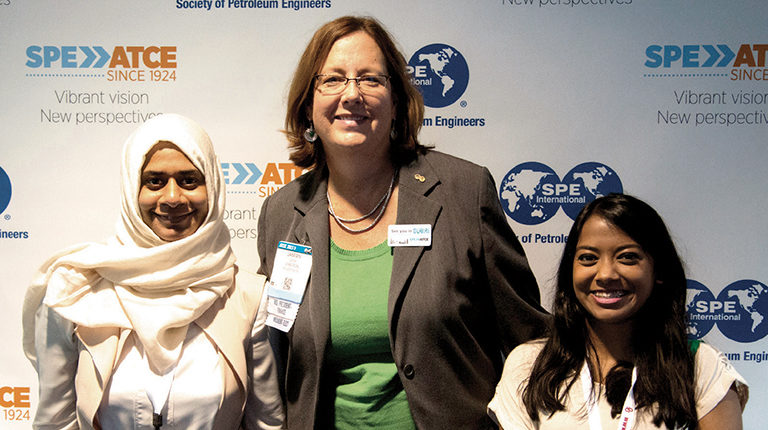 In her International Women’s Day message, 2017 SPE president Janeen Judah encouraged more women to enter the engineering profession. She said that there are many women leaders in SPE, from the board of directors, through the committees and local organizations. As president, she works to increase the visibility of women across the organization.

“When I travel around the world, I offer to do special events for women where they have extra access to me as a leader and have the opportunity to talk to me and learn about my career and my journey as a woman in an engineering profession,” said Judah.

In an earlier video message to young girls, she encouraged them to continue learning math, chemistry, and other science subjects in school to take advantage of the great job opportunities the science, technology, engineering, and mathematics (STEM) field can offer.

She offers a business case for the engineering profession:

In her column for the March JPT issue, Judah said that the Big Crew Change has happened in the oil and gas industry—where the older generation of professionals who entered the industry in late 1970s and early 1980s have retired and were replaced by a wave of young professionals. She predicts that this change will offer opportunities to the young professional technical workforce to run the show in the next upturn. Citing how the digital-native generation is vastly global and how multinational companies source their workforce globally, she emphasized the importance of OECD countries keeping up with the demand for graduates proficient in STEM subjects.

Judah said there are still many opportunities to empower women, to teach them to be bold in their thinking and bold in their expression. “Eventually we will get to where they [women] are proportionally represented throughout the pipeline of engineering professions. I want to be part of that.”

Janeen Judah is the 2017 President of the Society of Petroleum Engineers, seconded from Chevron. She has held many SPE leadership positions, including SPE International Vice President Finance, on the Board as director of the Gulf Coast North America Region, and chairing both the Gulf Coast and Permian Basin sections. She was named a Distinguished Member of SPE in 2003 and received the Distinguished Service award in 2010. She started her SPE leadership as a student section officer at Texas A&M University.

Her past Chevron leadership positions include general manager for Chevron’s Southern Africa Business Unit, based in Houston, Texas; president of Chevron Environmental Management Company; and general manager of Reservoir and Production Engineering for Chevron Energy Technology Company. Before joining Chevron, she worked for Texaco and ARCO in various upstream petroleum engineering positions, starting in Midland, Texas, in 1981.

Judah holds BS and MS degrees in petroleum engineering from Texas A&M University, an MBA from The University of Texas of the Permian Basin, and a JD from the University of Houston Law Center.