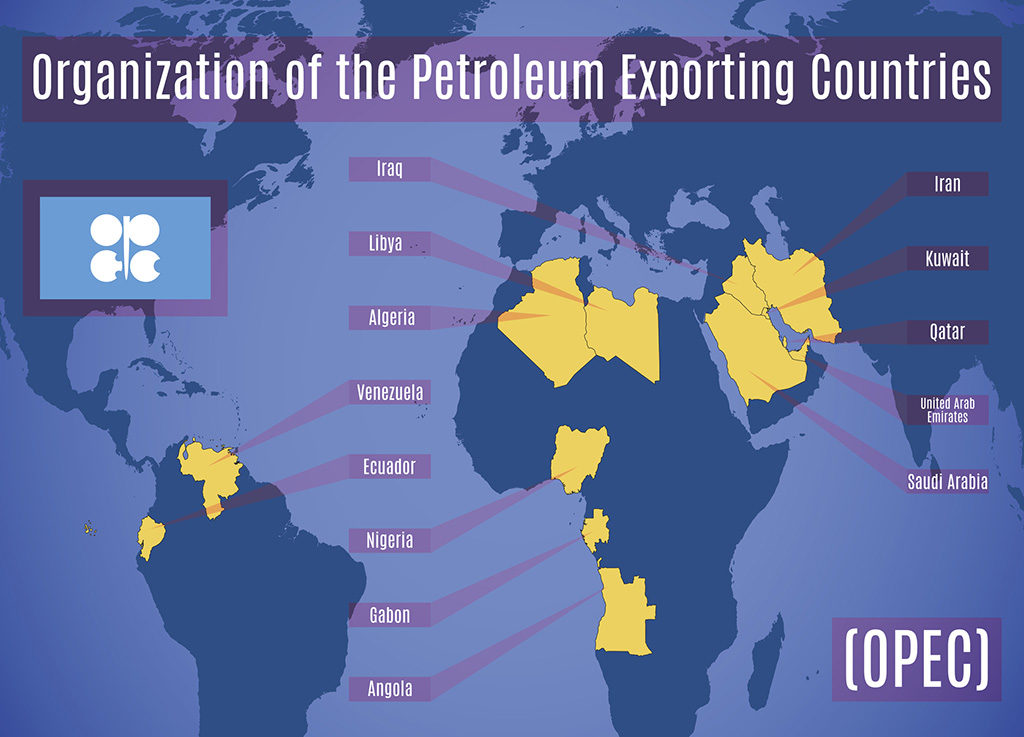 The Organization of the Petroleum Exporting Countries (OPEC) is often called a “cartel” that manipulates the price of oil for the benefit of its members. The potential for OPEC to influence the supply/demand balance is huge.

Because of their high levels of both reserves and production, OPEC member countries have attempted to balance their own output with the demands of the global economy since the earliest days of the organization. Sometimes, this entailed curtailing production to adjust to weakening demand or global oversupply, or increasing production to offset shortages.

An intergovernmental organization, OPEC states its mission as “to coordinate and unify petroleum policies of its member countries and ensure the stabilization of oil markets in order to secure an efficient, economic, and regular supply of petroleum to consumers, a steady income to producers, and a fair return on capital for those investing in the petroleum industry.” (OPEC 2017).

The organization was instituted in 1960 by Saudi Arabia, Iran, Iraq, Kuwait, and Venezuela in order to give member countries more control over their resources, larger access to global markets, and a means of combatting the dominance of multinational companies in the oil markets during that period. Today, OPEC is a consortium of 13 members, including: Qatar, Libya, UAE, Nigeria, Algeria, Ecuador, Angola, and Gabon apart from the founding nations. Indonesia, as of November 2016, has suspended its membership in the organization.

OPEC is not only capable of balancing the markets, but also exerting significant influence on global petroleum markets at critical junctures to drive the price of oil up or down. Such periods have included

Most recently, OPEC intervened in the global overproduction that led to a drop in the oil prices by some 65% off of the 2014 highs. OPEC initially attempted to allow the market to rebalance itself, which led to further declines in oil prices and an increase in global crude stocks (EIA 2016).

On 30 November 2016, OPEC decided to reduce member countries’ production by 1.2 million B/D to 32.5 million BOPD. In addition, 11 other non-OPEC countries agreed to reduce production by almost 600,000 B/D (Financial Times 2016). This was intended to reduce the oversupply and increase oil prices, since oil production and exports are the backbone of most OPEC nations’ economies. The long-term effects of a major OPEC deal, however, are uncertain. While the cuts from both OPEC and non-OPEC nations provided some relief, with oil prices enjoying a boost above USD 50, there are challenges to this rally continuing, as can be seen with the oil price falling below USD 50 this week.

OPEC continues to exert considerable influence on the marketplace, but ultimately more than 60% of oil and 80% of gas production comes from non-OPEC nations. Historically, Saudi Arabia has been the swing producer responsible for balancing the market, but increasing production capacity in US shale, Russia, and Iran have begun to challenge Saudi Arabia’s, and thus OPEC’s, role in the markets. Iran has emerged from decades of economic sanctions and is increasing production dramatically, with initial targets of 3.7 million B/D and, more importantly, plans to increase that number to 4.8 million B/D. US shale producers have resiliently held on to their market share, increasing efficiency and investing in new acreages. Furthermore, despite low oil prices and economic sanctions, Russian oil production has reached almost record highs entering 2017 (Reuters 2017). Even within OPEC’s own ranks, the enforcement of production quotas has not been perfect. Indonesia’s suspension of OPEC membership in November 2016 is likely a fallout of its unwillingness to accept any production cuts as it is a net oil importer.

OPEC’s impact on the oil markets is further complicated by competition from the renewable energy sector, notably solar and wind power, which has been gaining ground recently due to changes in global energy policy and advancements in “green” technology. For example, Google announced in December 2016 that its data centers and offices could become fully powered by renewable energy as early as 2017 (Guardian 2016). Continued adoption of these technologies, and others like electric vehicles, could decrease future demand growth substantially.

Lower prices over the past year have negatively impacted the economies of the OPEC countries. Saudi Arabia had a fiscal deficit of 16% of gross domestic product (GDP) in 2015; this is projected to slightly narrow to about 13% this year due to forced spending cuts, including those on wages and fuel subsidies. The growth of Saudi Arabia’s economy is set to slow to about 1%, and the economies of other OPEC countries are in similarly fragile state. Venezuela’s economy, for example, is contracting at 10% of its GDP.

Beyond issues of economy, many of OPEC’s member countries are also embroiled in challenging social and political struggles; there is currently a civil war in Libya, ongoing conflicts in Iraq, and a recession and humanitarian issues in Nigeria. These challenges, combined with threats from non-OPEC oil producers and non-petroleum energy sources, mean that OPEC’s future influence may decrease, but will continue to play an outsized role in oil and gas market dynamics.