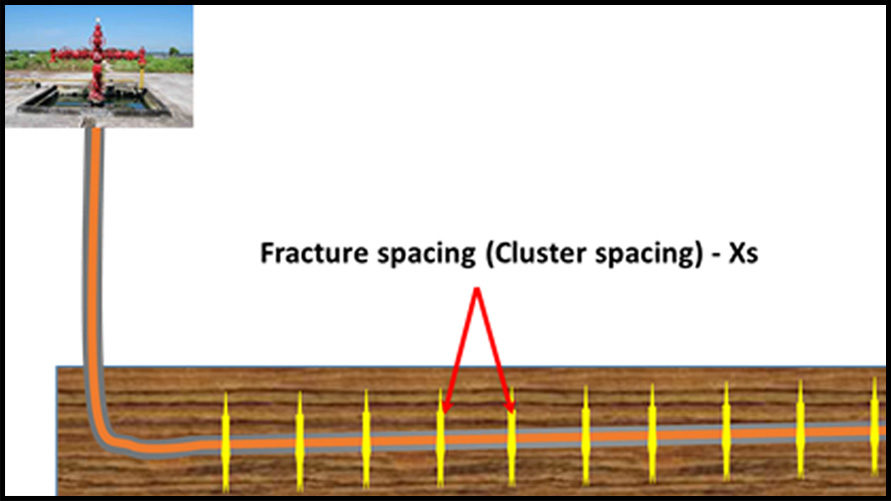 The industry spends significant amount of time and money to optimize completion designs to develop various unconventional resource plays, including cluster spacing or fracture spacing. It is strongly believed that better reservoir characterization and better modeling technique selection ought to shorten the learning curve and save money. This article reviews the state-of-the-art on fracture spacing optimization and discusses the challenges that the industry is facing to achieve an optimal cluster spacing decision.

To forecast the well performance, we often set up a planar fracture model like the one shown in Fig. 2. Under the assumption of linear flow with infinite fracture conductivity, Wattenbarger’s Solutions—for “short-term” approximations (Wattenbarger et al. 1998) can be written as the following equation (Eq. 1):

The Eq. 1 can be simplified as following:

To fully understand the well performance, we study the flow regimes between fractures and horizontal well laterals. The following chart (Fig. 4) illustrates the linear flow regime between two fractures with an assumption of infinitive conductive fractures (meaning no extra pressure drop within fractures).

The time to reach the end of the first linear flow can be estimated by the following equation.

To understand the pressure depletion between two fractures, we set up a single porosity model as illustrated in Fig. 4 with initial pressure of 4,500 psi and other parameters as shown in Table 1.

Figure 5 illustrates the pressure distributions between two fractures with 40-ft spacing at the end of year 30 for formations with different matrix permeability.

More than a decade ago, due to the lack of understanding of unconventional resource reservoirs and the limits of completion technologies, the cluster spacing was designed up to 700 ft in Barnett and Bakken plays. Currently, the cluster spacing is as close as 15 ft apart in Eagle Ford and DJ Basin, and the operators are testing even closer cluster spacing than 15 ft. The motivation of having tight fracture spacing is to have higher initial production rate, as illustrated by Eq. 1. For example, for a horizontal well with 5,000 ft lateral length, we can create 10 fractures with 500 ft fracture spacing, or 100 fractures with 50 ft with the assumption of planar fracture propagation, resulting in 10 times more fracture surface area. With Eq. 1, the initial production rate can be 10 times different provided that all fractures are created equally with the same dimensions and conductivities. Thus, we want to create as many fractures as possible to achieve the highest possible initial production rate. However, higher initial rate is at the expense of possible higher completion cost and operation implementation complexity.

In 2012, Cheng (2012) published a study on the impacts of number of perforation clusters and cluster spacing on production performance. The study focused more on the stress-shadowing effect on the inner fractures, which may have narrower fracture width or less fracture conductivities. Thus, the less conductive fractures would impair the well performance. The study concluded that the magnitude of mechanical interactions of fractures is closely related to the number of fracture simultaneously created and fracture spacing, and that increasing the number of perforation clusters in one stage does not necessarily increase the initial production rate.

Lu et al. (2016) performed a similar study. However, probably due to different assumptions, the study showed the wider middle fractures (higher fracture conductivity) but less fracture dimensions. For the formation case they studied, it was recommended that optimal cluster spacing is about 120 ft. Jin et al. (2013) performed a thorough fracture spacing study with numerical simulations and developed simple correlations that quantify the required fracture spacing necessary to optimize hydrocarbon recovery for different reservoir permeability and fluid properties. The study focused more on the impact of “k/u” (reservoir flow mobility ratio). The study used the fracture or cluster efficiency to simplify the impact of the fracture dimensions and conductivity, and no geomechanical impact was directly included in the study. The study concluded that the fracture spacing would range from 33 ft to 273 ft in Eagle Ford depending on matrix permeability and reservoir fluid properties.  The study also recommends increasing the number of stages while reducing the number of clusters per stage, which was derived from the consideration of less efficiency with more perforation clusters within a single completion stage.

All of the studies have concluded that the well performance and economics depend on the number of effective fractures created and connected to the wellbore. The optimal fracture spacing depends on the matrix permeability and the effective drainage surface of hydraulic fractures.  The challenges:

The Challenges and Directions of Efforts

Figure 8 shows a photo from one of Eagle Ford outcrop spots. We can easily see the layering/bedding and heterogeneity. We can speculate that hydraulic fracturing growth is probably much more complicated than planar fractures.  Lack of complicated fracture modeling technologies limits our understanding of hydraulic fracture propagations and thus constrains the applications of the “optimal” fracture spacing recommendations from various studies, including those mentioned earlier.

Reservoir characterization plays a significant role in cluster/fracture optimization process.  For example, we need to know if a single-porosity model fits a given formation or a dual-porosity model fits the situation better.  For the early example shown in Table 1, if we use a dual-porosity model, both pressure depletion (Fig. 9) and recovery efficiency (Fig. 10) are quite different from the ones from a single-porosity model (Fig. 5 and Fig. 6). Based upon the dual-porosity model, the pressure inside fractures is the same as the flowing bottomhole pressure while the pressure in matrix is hardly depleted (Fig. 9) at the end of year 30. The modeling results also tell us that we may want to place the cluster as close as 10 ft, even with higher matrix permeability, which is significantly different from the conclusion based upon the single-porosity model. Therefore, the deep understanding of reservoir characterization dictates the selection of different modeling approaches, which, in turn, will dramatically impact on the selection of the fracture spacing.

Though there have been studies performed to understand the might-be non-darcy flowing mechanisms within nano-darcy rocks (Swami et al. 2013, Yan et al. 2013), most of commercial simulation tools are still based upon Darcy-flow mechanism only. We do not know the impact of using Darcy-flow simulator to model possible non-darcy flows within nano-darcy rocks, which, in turn, limits the application of our current modeling study recommendations. Because of the limitations of fracture spacing recommended by different simulation modeling studies, the industry has spent tremendous resources to pilot-test and optimize fracture spacing and completion size.  It may take hundreds of million dollars and long time for an operator to settle down with the “optimal” cluster spacing and completion size whenever it enters a new play. The money and time can be and should be significantly reduced by better understanding reservoirs and better modeling techniques.

Therefore, the industry has been working on different technology fronts so that we can quickly reach an optimal fracture spacing decision for a given formation:

Effective fracture spacing is critical to well performance. The key to an optimal fracture/cluster spacing decision is reservoir characterization, such as understanding of reservoir matrix permeability, geomechanical properties, and existing natural fracture networks. Great efforts should be taken to understand the reservoir and develop better modeling technologies to reduce the piloting cost and shorten the piloting period to get into full-field development stage. The industry is working in different technology fronts to attack the challenges.

Hongjie Xiong is the director of production enhancement at the Texas Oil and Gas Institute (TOGI). Hongjie has diversified managerial and technical experience in domestic and international oil and gas operations. His expertise includes asset and project management, conventional and unconventional reservoir exploration, development and management, reserve booking, well stimulation, technology development, oil and gas property evaluation, and economic analysis. Before joining TOGI, Xiong was the global reservoir engineering advisor for ConocoPhillips for more than 10 years, where his main responsibilities were to evaluate companywide exploration and field development projects; advise senior management for funding approvals and project sanctions; and provide guidelines to appraise and develop unconventional resources plays, including Niobrara, Eagle Ford, Bakken, Permian Basin, Montney, and Horn River. His other previous positions include the manager of production optimization for Schlumberger Data and Consulting Services and engineering advisor for Burlington Resources. Xiong holds BSc and MSc degrees in petroleum engineering from Southwest Petroleum Institute, and PhD in petroleum engineering from Texas A&M University.

SPE 138843 Impacts of the Number of Perforation Clusters and Cluster Spacing on Production Performance of Horizontal Shale-Gas Wells by Y. Cheng.

SPE 164840 A Numerical Model for Multi-Mechanism Flow in Shale Gas Reservoirs With Application to Laboratory Scale Testing by V. Swami, A. Settari, and F. Javadpour.

SPE 163651 Beyond Dual Porosity Modeling for the Stimulation of Complex Flow Mechanisms in Shale Reservoirs by B. Yan, Y. Wang, and J.E. Killough.