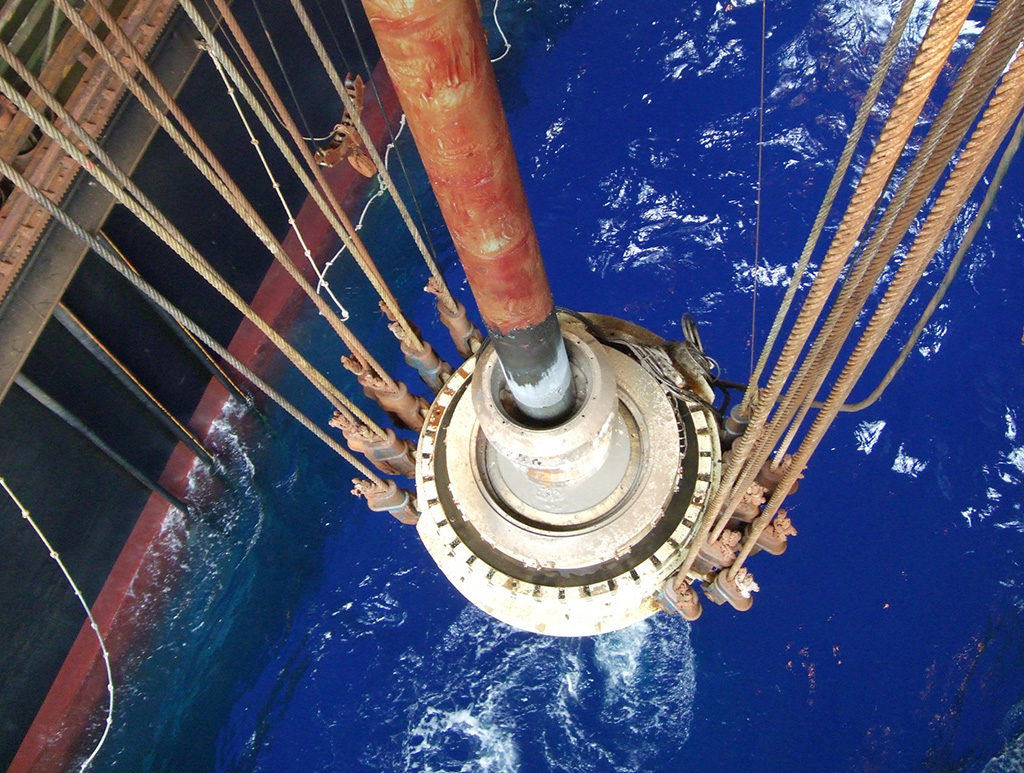 The oil and gas industry continually pushes the boundaries of exploration in deeper waters and unsurprisingly, wells become inherently more challenging and costly in order to reach geologic targets. Coupled with the intrinsic uncertainty in subsurface models and the unpredictable nature of pore and fracture pressures, well control in deep water becomes critical.

One of the key concerns in offshore well control is riser gas migration. Small gas influxes that are difficult to detect become entrained in a solution of oil-based mud (OBM) and if circulated above the subsea blowout preventer (BOP), can break out of solution, resulting in an uncontrollable rapid unloading event in the riser.

A riser gas unloading event poses considerable risk to crew personnel, infrastructure, and the environment. The challenge is to develop safe and efficient means of managing small and large gas influxes to mitigate the possibility of rapid unloading during deepwater operations.

For onshore wells or wells drilled in shallow waters, the traditional method is to close in the BOP and redirect influxes through both a choke manifold and gas separation system. This method does not apply to deep water where the BOP is positioned at the mudline and influxes are often detected in the riser, above the BOP.

Often cited as a reactive solution, riser gas handling (RGH) systems allow the riser to be sealed at the top when gas is detected and then for the fluids to be diverted to a choke manifold and gas separator. An RGH system typically comprises a retrofitted annular BOP and associated flow spool installed on top of the riser. These types of systems are considered manual as they entail both detection by conventional means as well as manual activation by the driller.

An alternative approach that is considered proactive is implementing managed-pressure-drilling (MPD) technology in deep water to create a completely closed hydraulic-loop system. Although MPD technology has become widely implemented on land operations, its employment in deep water has been slow. Nevertheless, current deepwater MPD systems can be adapted to provide a wide-ranging approach to riser gas mitigation.

The deepwater MPD configuration includes a rotating control device (RCD) used in conjunction with an automated choke manifold and high-sensitivity mass flow meter as shown in Fig. 2. The RCD, as defined by the American Petroleum Institute specification API 16RCD, is a drill-through equipment that is designed to allow the rotation of the drillstring and containment of pressure by the use of seals or packers that seal against the drillstring (drillpipe, casing, etc.).

In order to mitigate riser gas, the RCD would be installed on top of the riser with an additional annular BOP and flow spool below it. This system would allow fluids to be safely diverted away from the rig and instead toward an MPD choke manifold. MPD systems also utilize highly accurate Coriolis mass flowmeters that can detect small influxes quickly before escalation and apply surface backpressure to maintain a desired annular pressure in the wellbore.  The benefits of a closed-loop system mean that dynamic changes in wellbore pressure can be detected in real time and managed (Toralde and Wuest 2014). 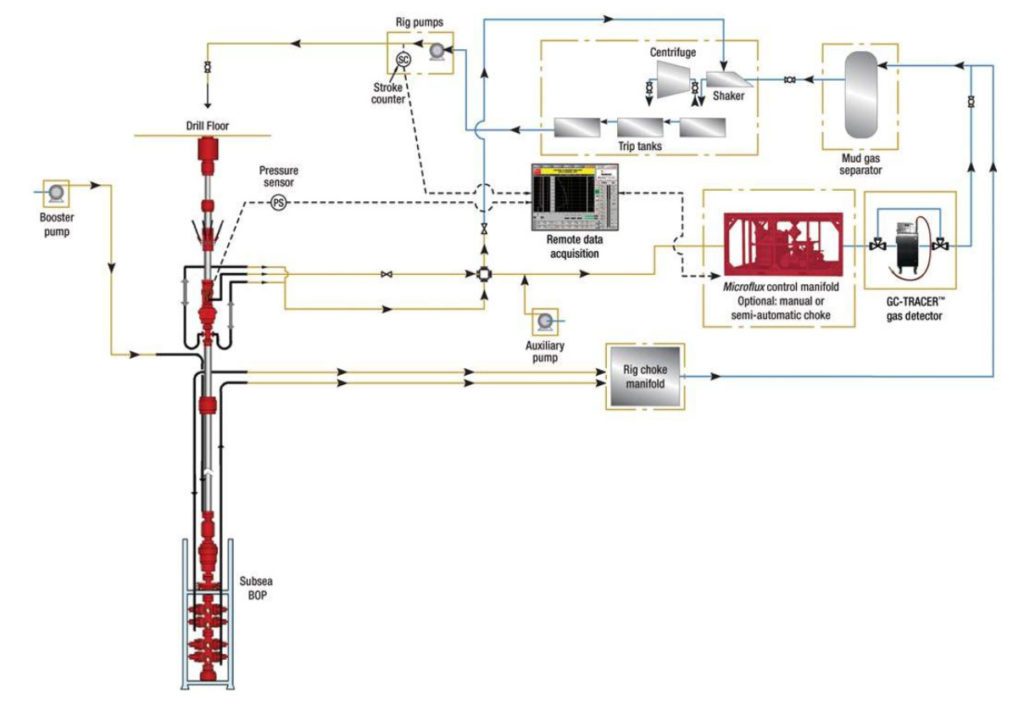 A subclass of MPD, dual-gradient drilling (DGD) systems, allows drilling in ultradeep waters where narrow drilling windows exist between pore and fracture pressure due to a lower overburden stress. DGD systems allow careful navigation of tight drilling windows and drilling of wells that were at one time considered “undrillable” due to technical constraints. Benefits of DGD include fewer casing strings required, larger production tubing, and drilling wells where the hydrostatic column of mud alone could exceed fracture pressure. DGD systems comprise two or more different pressure gradients where a mudline pump is used to pump returns up to the surface.

In a typical DGD system, the riser annulus is filled with seawater to closely match the hydrostatic pressure of the water depth, while the annulus comprises heavy drilling mud. To the wellbore, a higher-density mud is felt at a lower vertical depth to address formation pressure concerns.

In DGD systems such as controlled mud level (CML), the riser is partially evacuated to air with mud returns discharged through a subsea pump attached to the riser at a predetermined depth. Riser gas migration becomes a very important subject matter in CML and dual-gradient systems where gas unloading could potentially create a combustible mixture with air as well as pose serious risks to overall well integrity. Research is necessary to develop both operational practices and technologies for mitigation.

At the DGD Laboratory at Texas A&M University, investigation of riser gas is being conducted both experimentally and computationally.

Using dynamic multiphase flow software, riser gas migration is being modeled in order to develop newly proposed procedures, which can help mitigate gas-in-riser events. The models allow for transient hydraulic behavior to be measured as well as account for gel-breaking effects, temperature variations, and surge and swab calculations. With more refinement, these simulations could prove valuable in describing riser-gas behavior in deepwater OBM cases.

Experimentally, gas migration behavior is being studied using a scaled model of a marine riser. The riser model studies the effects of both viscosity and flow rate on gas migration, as shown in Fig. 4.

The experimental riser is scaled down from the actual 19.5-in. outer diameter to 6 in.  Fluid is circulated using two centrifugal pumps where one is charged with controlling the discharge rate and height of fluid column.

The scaled riser uses clear PVC allowing both the fluid level and the gas migration to be observed in real time. Pressure transducers are placed at various points throughout the system in order to measure pressure changes with varying gas concentrations.

The next phase of the scaled riser system is to perform tests using specially engineered drilling mud, and more precise sensors that can more accurately measure the gas rate and pressure eliminated from the system. Additionally, improving the pump systems would allow higher maximum flow rates and head pressures.

Although the challenge of riser gas migration has been written about extensively, comprehensive analysis of gas unloading behavior and mitigation procedures is still lacking. Deepwater MPD systems that create a closed loop offer a practical approach to dynamic changes in wellbore pressures and gas influxes. With automation, these systems can maintain desired annular pressure within safe drilling windows while managing well control events such as influxes and losses.

In ultradeepwater drilling systems such as CML where the riser is partially evacuated, further field tests and research are needed to develop proactive solutions that can mitigate and manage the risks that riser gas poses to well integrity and personnel.

Aaron Mendonsa is a research engineer at Shell, focusing on leveraging data analytics and machine learning to improve drilling performance. His expertise is primarily on complex deepwater systems and drilling mechanics theory. Mendonsa has served in various engineering roles, most recently as an engineer for Schlumberger Drilling and Measurements in deepwater. He holds an MSc in petroleum engineering from Texas A&M University and a BS in chemical engineering from Carnegie Mellon University.

Jerome Schubert is an associate professor and W.F. and Marilyn Albers Faculty Fellow in the Harold Vance Department of Petroleum Engineering at Texas A&M University. Schubert’s research interests include deepwater drilling, well control, dual gradient drilling, underbalanced drilling, managed pressure drilling, risk assessment of drilling systems, extra-high-pressure/high-temperature mud rheology and cementing, and well abandonment. His research has resulted in three patents in dual gradient drilling, more than 75 conference and journal publications, and two textbooks. Schubert has supervised more than 100 current and former graduate students. Prior to academia he worked as a drilling engineer for Enron Oil and Gas and Pennzoil Company. He holds a PhD in petroleum engineering from Texas A&M University.