Gas Hydrates: Where And How To Look for Them 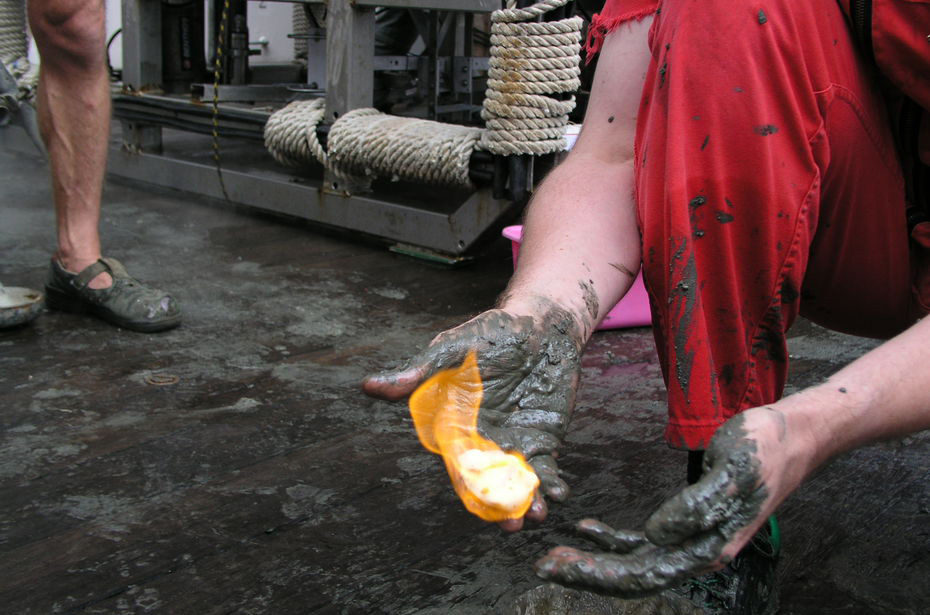 Demonstrating the disassociation of natural gas hydrates. Photo courtesy of IFM-GEOMAR at http://www.methanegashydrates.org/galleries.

What Are Gas Hydrates?

Gas hydrates (clathrates) are crystalline solids consisting of gas molecules—usually (but not always) methane surrounded by a cage of water molecules in a relatively stable and compact composition (Fig.1). Gas hydrates are found in equilibrium under conditions of high pressures and low temperatures. These conditions are found onshore under permafrost in the polar regions and offshore along the continental shelf margins.

Why Are They Important to Us?

One unit of gas hydrate when dissociated can produce  approximately 164 units of gas (methane), so they are a very compact source of energy (Kvenvolden 1998). Secondly they are widely distributed around the world and several times greater than the amount of conventional natural gas resources. The total optimistic estimate of natural gas hydrates is around 300,000,000 Tcf, which easily dwarfs the estimate of around 13,000 Tcf for the remaining global reserves and undiscovered resources of conventional natural gas. Now we can let our imagination run wild about how much more secure we will be in  meeting our future energy needs if we were to produce even a minute fraction of the total gas hydrate resources.

Where To Look for Gas Hydrates?

Predicting the occurrence of gas hydrates is a relatively easy issue since they are stable only under a particular pressure and temperature range, beyond which they dissociate into free gas. In most of the cases, the free gas escapes into the atmosphere, or in extremely favorable conditions it can be trapped within the overburden. The depth range within which they can exist in stable condition is called the hydrate stability zone (HSZ). In the polar regions (Arctic and Antarctic) where they can occur on land below the permafrost, the favorable depth in general ranges from 200 m to around 800 m below the surface. In extreme cases this can be anywhere between a few inches below the surface to just less than a kilometer.

Under the ocean bottom at lower latitudes this favorable zone can range from 1.2 km to 1.6 km with a minimum water depth of more than 450 m, where the pressure goes beyond 663 psi and the water temperature range is 4°–6°C; the range below ocean bottom is highly dependent on the geothermal gradient. The HSZ increases with the decrease in geothermal gradient and can go beyond 2 km in depth in favorable cases.

If this screening criteria for the presence of gas hydrates are applied, vast stretches of land as well as ocean floor would be identified in which to look for them; for example, the permafrost terrain occupies about 20% of the Earth’s surface. Unfortunately gas hydrates are not found in all places where the above criteria of temperature and pressure conditions are met because the presence of a source of thermogenic or biogenic gas is required. So it boils down to the same old trusted geological criteria—the presence of organic material and conditions favorable for their conversion into hydrocarbons—which can then be encased in water molecules to form gas hydrates.

To summarize, for gas hydrates to form in sediments the following conditions have to be met:

(2) Adequate gas must be generated in the subjacent sediments or by bacteria within the HSZ itself.

(3) Subjacent generated gas must be able to migrate upward to the HSZ.

(4) Water must be present in the HSZ.

Can Seismic Be Used To Identify Gas Hydrate Zones?

The answer is a resounding yes, but with many caveats. Seismic can be used as indirect evidence to further pin down the prospective areas. We can also get to the direct gas hydrate indicators (Ip(Vp*ρ), Is(Vs*ρ)) with the help of simultaneous inversion due to the favorable anomalous physical properties of the hydrates when compared with the physical properties of the sediments that encase them. For example, compressional velocity (hydrate: 3800 m/sec; sediments: approximately 2500 m/sec); shear velocity (hydrate: 1880 m/sec; sediments: 1200 m/sec); and density (hydrate: 0.92 gm/cc; sediments: 2.2 gm/cc).

Now we can understand how much impedance contrast would be generated between the hydrate-filled and nonhydrate-filled sediments, which generally gives rise to a fairly consistent reflector called the bottom simulating reflector (BSR). This delineates the base of the HSZ. The reflector has the polarity opposite to that of the ocean bottom and nearly mimics it.

The most important factor for the formation of gas hydrates is the presence of free gas either in the form of biogenic gas, which originates at shallow depth, or migration of deep-seated thermogenic gas to shallow depths through vents along faults, which can be picked up easily on seismic sections in the form of gas chimneys. The clues are if a sudden blanking of seismic data immediately above a BSR, or faults and poor quality P-wave data all along the faults piercing through the BSR are found. You can then suspect the concentration of gas hydrates above the BSR.

What Are We Waiting for?

Why can’t we go ahead and produce all the gas hydrates which are so abundantly present at such shallow depths below the Earth’s surface? There is a hitch here—producing gas hydrates is not such an easy task. Gas hydrates can become violently unstable when the equilibrium of their pressure and temperature conditions are violated. In fact, the major contributor to the greenhouse effect is not the manmade emissions of CO2 but the large quantities of methane gas released from the ocean floor due to violent dissociation of natural gas hydrates. Hence, the trick to get the gas out is to dissociate the hydrates but do it in a controlled manner, which is not in any way less challenging than generating power from controlled nuclear reactions.

Three methods have been tested widely to yield gas hydrates in the recent past. They are depressurization, thermal injection, and inhibitor injection (Osadetz 2006). It is found that CO2 has the capability to displace the methane molecules from the hydrate crystal lattice. This can be utilized to our advantage by deriving the double benefit of fixing the atmospheric CO2 underground and producing methane from hydrates for our use. This can justify the enormous costs of CO2 sequestration.

Recent research is also concentrating on the use of microorganisms (e.g., Chryseobacterium) that produce antifreeze proteins, which can destabilize the crystal lattice of gas hydrates and release gas in a controlled manner. As research progresses, the days may not be far off when we would be commercially exploiting gas hydrates as a major source of energy.

Rajeshwaran Dandapani is director geophysics at Telesto Energy. Dandapani has more than 29 years of industry experience and before Telesto, he was senior geoscientist (reservoir geophysics) at Petronas, senior reservoir geophysicist/project manager at Schlumberger, production seismologist at Shell, and exploration geophysicist at Oil and Natural Gas Corporation of India. He is experienced in exploration, appraisal, and development projects, including reserves booking and unitization. Dandapani possesses expertise in identification and evaluation of prospects with the help of 2D/3D seismic, well logs, and other geoscientific data in workstation environments, and his special interest is in post- and pre-stack attribute analysis for reservoir characterization. He is an expert on clastic and carbonate reservoirs across Australia, India, Malaysia, North Sea, China, Saudi Arabia, Egypt, Angola, and Iran.