Energy Education: It Starts With You

“Let me ask what my green friends will say,”

a lady responded as I was talking to her about the importance of California producing its own oil.

“Could you expand on that?”

I asked, eager to understand her perspective. “Well,” she said, “I am considering putting solar panels in my home, so I’m not sure I want to support any oil production.”

“I see … I think solar panels in your home may be a great idea, and solar energy is an important part of the energy balance. I understand you may have some concerns with the oil industry, especially with some of the things you may have heard or read. However, if I told you that those solar panels you install in your home will have little to do with your oil consumption, would that change your mind? Furthermore, nearly two-thirds of California oil comes from outside state lines, often from areas with lower environmental standards than California,” I said (California for Energy Independence 2013).

She looked at me, puzzled. Then skeptical. And then approachable. “Interesting, I hadn’t considered that,” she responded. “I didn’t know we import that much oil. It makes sense that California would have high environmental standards.”

We left the conversation on a positive note, and she said she would spend some time and do more research, but was much more open to supporting local oil production. Not only would local production stimulate the economy and provide high paying jobs, but it would also reduce our dependence on foreign oil.

When is the last time you spoke to someone about the oil and gas industry? About the energy industry? Friends, family, strangers? It is critical we share our stories, empathize with the public, celebrate our successes, and educate those around us. We can all Discover a Career today by being a champion for our industry.

There is no doubt that fossil fuels emit CO2 and contribute to greenhouse gases. It is a natural byproduct of combustion with hydrocarbons and oxygen. Just like there are concerns, there are also clear benefits of having affordable energy that is reliable and abundant. When is the last time you doubted that the light would turn on when you flipped the switch, or were worried you would not have gasoline for your car?

It is crucial that we, as an industry, play our part in empathizing with and educating those around us. There is a lot of misinformation in the public, and it is our duty to understand the gaps, educate ourselves, and then help spread accurate information. In addition to the example above of understanding how and where energy sources are used (transportation vs. electricity), there is also misinformation on hydraulic fracturing (HF) and seismic activity.

The United States has seen a significant uptick in seismic activities over the course of the previous 10–15 years. The question as to the cause and regional specificity is where things are less clear.

The data and studies simply do not support HF being linked to seismic activity (Induced Earthquakes 2017). From a physics standpoint, this makes sense because HF is a one-time stimulation activity that lasts a few hours (The Process of Hydraulic Fracturing 2017). It has been safely executed in the US, specifically California, for more than 60 years with no documented seismic connection. So, to what can we attribute the increase in seismic activity over the last 10–15 years?

Scientists have concluded that there may be a correlation between wastewater injection and seismic activity depending on a few key factors. These include “the injection rate and total volume injected, the presence of faults that are large enough to produce felt earthquakes, stresses that are large enough to produce earthquakes, and the presence of pathways for the fluid pressure to travel from the injection point to faults” (Induced Earthquakes 2017). Consider the difference between Oklahoma and California, both regions where waste water is disposed underground.

A recent study conducted by the US Department of Energy’s Fossil Energy Office, the University of Oklahoma, and the Oklahoma Geological Survey concluded that there is a correlation between Oklahoma earthquakes and wastewater disposal (Snow 2017 [locked content, reference details below]).  Specifically, they found that “seismic activity grew in central Oklahoma in the 18 months leading up to 31 December 2015, but declined markedly during the following year as the state began to regulate oil and gas wastewater disposal.” 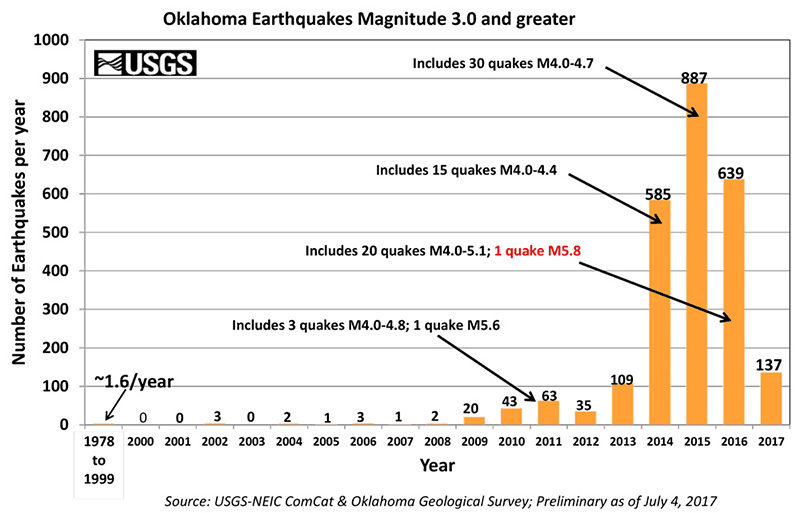 A reactive response to increased seismic activity has forced Oklahoma regulators and the US Environmental Protection Agency to order the reduction of injection volumes as well as the closure of injection wells across the state in active areas (OGJ 2016).  The state legislative board has also developed a statewide earthquake response plan to address the growing concern.  In fact, “more than 400 saltwater disposal wells covering 5,000 sq. miles of central Oklahoma are part of an expanded earthquake response plan to deal with the state’s rise in earthquake activity” (OGJ 2016).

Although induced seismic activity can be attributed to wastewater well injection as a causal factor, science shows us that this is not an open and shut case.  Data from states in central US confirm a direct link between well injection and increased seismicity, but that is not the case for states on the west coast (see image below). The California data show that the number of mainshocks (M>2.5) decreased from 1980 to 1995 and stayed relatively constant since (Goebel et al. 2016). The reason why wastewater injection and seismic activity are not correlated may be due to both the regional geology and the higher frequency of seismic activity along the San Andreas Fault line.

The next time someone asks you about solar energy, HF, or earthquakes due to oil and gas operations, you can help separate the facts from the misinformation. Similarly, there are many other topics where you can play an active role in shaping the energy debate.

Do your research, understand the data, and take initiative—always keeping in mind the public and its concerns. Discover a career within the one you already have—become an energy educator.

Looking for Energy Education Resources?
The Energy4Me website provides resources to engage and educate communities on the production of energy through hydraulic fracturing. The website features the latest tools and research related to this technology and several educational resources such as the video below.

Tarang Lal is a production engineer at Aera Energy in Bakersfield, California, focusing on artificial lift in a thermally mature reservoir. An active SPE member since 2013, he currently serves as the community outreach chair within his local San Jaoquin Valley chapter. In the past, he has served as the registration and continuing education chair for the 2017 Western Regional Meeting and as the young professional liaison during 2013–2014. He has mentored several high school and college students in building life skills and encouraging them to take STEM-focused [science, technology, engineering, and mathematics] college majors. He is the author of a blog focusing on the energy industry and its importance in modern society. Lal is currently pursuing his MBA from UCLA, holds an MS in petroleum engineering from Texas A&M University, and a BS in chemical engineering from UCLA.

Deen Femi Akinirinsola is an asset integrity engineering consultant based in Oklahoma City, Oklahoma.  He has held various engineering roles in the oil and gas industry and has participated in several asset integrity and optimization projects in Encana, ConocoPhillips, and G2 Integrated Solutions in Dallas and Houston. His professional experience is representative of practical application of engineering science and technology relative to the design, operation, and maintenance of oil and natural gas facilities and pipeline systems. In his spare time, Akinirinsola mentors and tutors underrepresented elementary school students while encouraging them to pursue STEM programs through higher education. He holds a BS in biological and mechanical engineering from Texas A&M University and an MBA from Forbes School of Business at Ashford University.