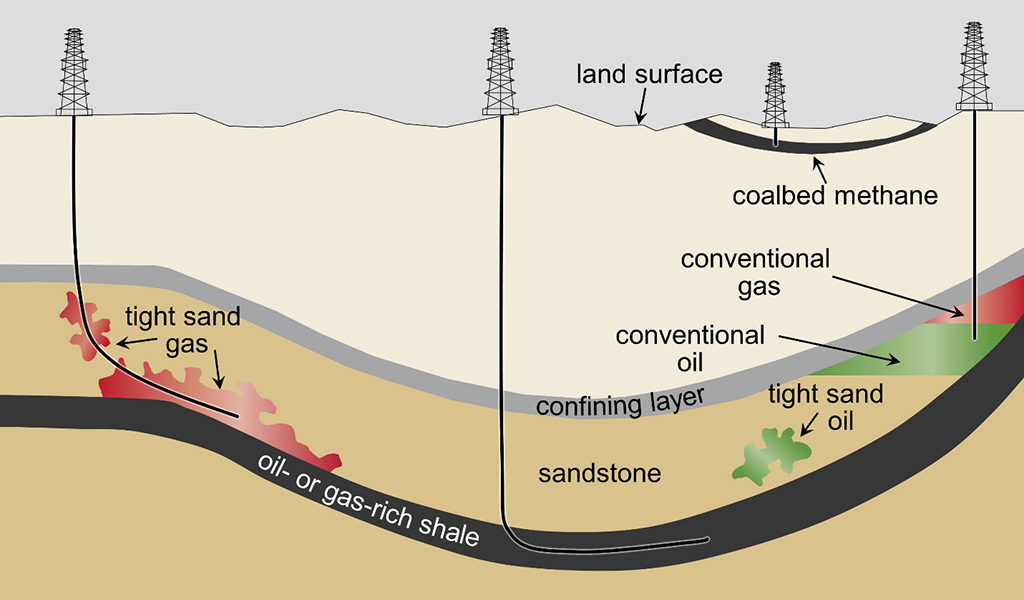 Schematic cross-section of general types of oil and gas resources and the orientations of production wells used in hydraulic fracturing. Source: EPA.

Oil production from shale and tight formations accounted for more than half of total US oil production in 2015 (EIA, 2016). Such amount is expected to grow significantly as the active development of low-permeability reservoirs continues. The current technique to produce shale oil is through primary depletion using horizontal wells with multiple transverse fractures.

The oil recovery in shale oil reservoirs is less than 10% (Sheng, 2015a), or 3–6%, according to the EIA 2013 report (US DOE, 2013). The oil recovery in tight formations is also low. The gas recovery is 15–25% (Kuuskraa, 2013). A large percentage of the oil remains unrecovered without enhanced oil recovery (EOR) methods. In other words, there is a big prize to be claimed in terms of enhanced shale and tight oil recovery.

In this article, the technologies to enhance oil recovery from shale and tight formations are briefly summarized. Before that, some terminologies are clarified.

There is a huge difference between oil shale and shale oil. Oil shale is a rock that contains a solid organic compound known as kerogen—a precursor to oil. Shale oil refers to hydrocarbons that are trapped in shale formations.

A fluid, either water or gas, could be injected into reservoirs through a flooding mode or in a huff-n-puff (huff and puff) mode. For the flooding mode, a fluid is injected through a dedicated well and oil and gas are produced from a separate well or wells. For the huff-n-puff mode, after a fluid is injected through a well, in situ fluids (oil, gas and water) and a fraction of the injected fluid are produced from the same well. For the huff-n-puff mode, there is a time period the well is shut-in in some situations. This time period is called soaking time. The process of injecting-soaking-producing is repeated.

Produced fluids may be re-injected into reservoirs in some situations. Thus the fluids are re-cycled. Such cyclic injection can be performed in both flooding mode and huff-n-puff mode. However, in the petroleum literature, cyclic injection, more often, refers to huff-n-puff injection.

To understand the EOR potentials from gas injection and water injection in different modes, simulation results are summarized in Table 1 (Sheng, 2015b). From this table, these observations can be made.

Compared with water injection, gas has much higher injectivity and compressibility. Injectivity is very important, as shale and tight formations have very low permeability. Higher gas compressibility also makes gas an energized fluid to push oil out during the puff period.

Both gas flooding and huff-n-puff gas injection were tried in field tests. It was surprising that gas can be injected without any injectivity issue for both of the gas-injection modes. However, significant oil rate increase was not observed in every field test. CO2 was used in all of the huff-n-puff gas-injection projects. For detailed field project performance, see Sheng (2017).

In US and Canadian shale formations, several waterflooding and water huff-n-puff projects were conducted. Consistent with the published laboratory research, field test results showed that water injection was less effective than gas injection. In China, large-scale water injection is carried out in tight formations whose permeability is in the order of micro-Darcies to milli-Darcies. The water injection increased oil production.

To enhance oil recovery, sometimes surfactants are added in fracturing fluids to change wettability and reduce oil/water interfacial tension. However, well performance could not distinguish the wells with surfactants injected from the wells without. Therefore, how surfactants play their role in enhancing oil recovery needs more fundamental research.

More methods have been tried in China, such as air foam drive, extending soaking time after fracturing, and microbial EOR (Sheng, 2017). Some research papers have been published on other EOR methods, such as air injection (Jia and Sheng, 2017), and thermal stimulation by high frequency electromagnetic (microwave) heating at the wellbore (Egboga et al., 2017).

More than 90% of oil may remain in shale and tight formations. Because of ultra-low permeability, it is very challenging to make any EOR method work. Although an EOR technology may work and increase oil recovery, a high percentage of oil may still remain in the ground. Enhancing oil production from the shale and tight reservoirs will be a long-lasting challenge.

James Sheng is a professor in the petroleum department of Texas Tech University. He worked in the oil industry for more than 20 years before entering academia. He holds a PhD degree from the University of Alberta. He is the author or coauthor of more than 200 papers, and holds 5 US patents and 2 provisional US patents. He has published two books: Chemical Enhanced Oil Recovery, and EOR Field Case Studies. He received several professional awards including the SPE Regional Technical Award for Southwestern US twice, in 2013 and 2015; TTU Whitacre Engineering Excellent Research Award in 2015; Most Influential Faculty Member in 2015, the Fulbright Specialist Grant; and the Outstanding Associate Editor Award for SPE Reservoir Evaluation & Engineering journal in 2008.