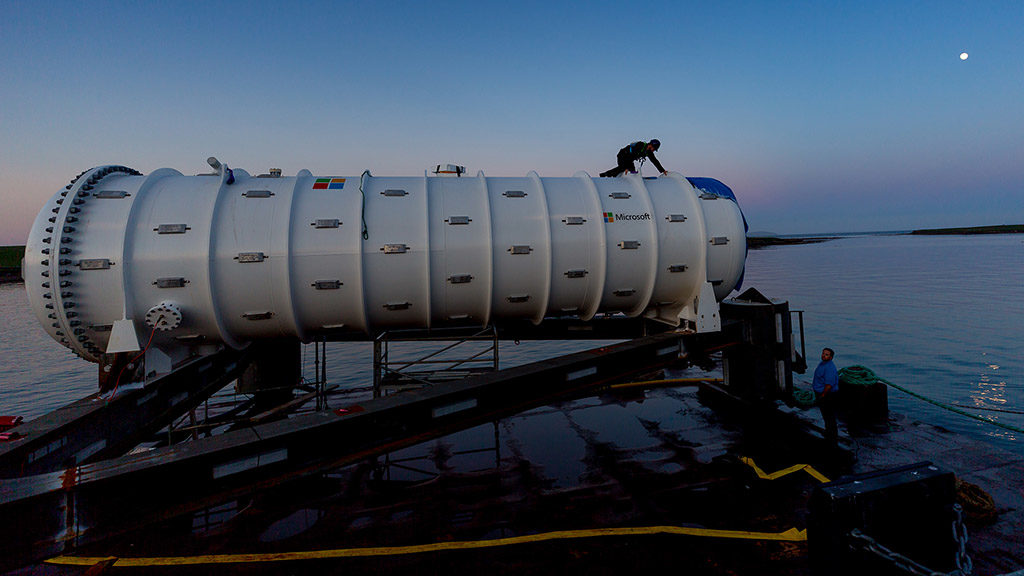 Microsoft deployed a datacenter underwater near Scotland’s Orkney Islands, by lowering it 117 ft by cable to the rock slab seafloor. The Northern Isles datacenter is loaded with 12 racks containing a total of 864 servers and associated cooling system infrastructure. It is part of Microsoft’s Project Natick, a research effort to investigate manufacturing and operating environmentally sustainable, prepackaged datacenter units that can be ordered to size, rapidly deployed, and left to operate lights out on the seafloor for years.

The intention of putting datacenters underwater is to have them near coastal communities to accommodate exponential growth in demand for cloud computing infrastructure near population centers. One of the biggest costs for land-based datacenters is the cooling process and placing the datacenter underwater offers free access to cooling.

The European Marine Energy Center, where the datacenter is deployed, is a test site for experimental tidal turbines and wave energy convertors that generate electricity from the movement of seawater. The datacenter will be powered by locally produced renewable electricity from onshore wind and solar, and offshore tide and wave. A cable from Orkney Island grid sends electricity to the datacenter, which requires 240 kW of power when operating at full capacity. It is designed to remain in operation without maintenance for up to 5 years.

A proof of concept vessel for Northern Isles was operated for 105 days. Encouraged by the results, the company has moved ahead with the design, manufacture, and testing of the full-scale model. The Project Natick team will spend the next 12 months monitoring and recording the performance of the datacenter, tracking parameters such as power consumption, internal humidity levels, sound, and temperature levels. This will allow the researchers to assess the success of operating datacenters underwater.