Daniel Yergin – A Prize for the Oil and Gas Industry 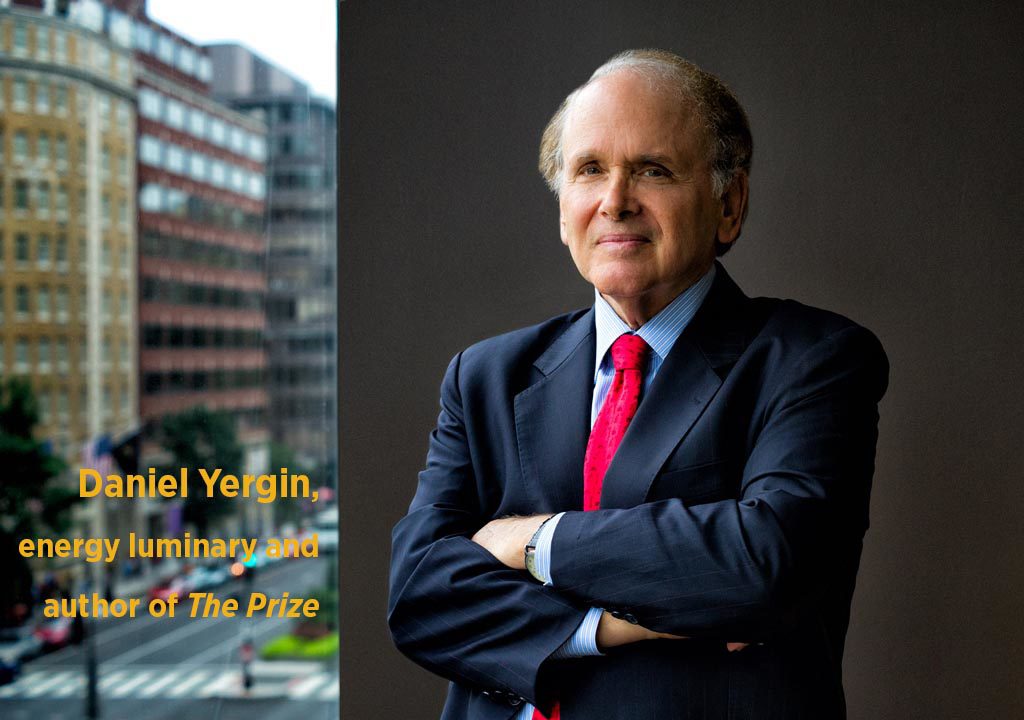 Over his career Daniel Yergin has emerged as a world renowned and internationally respected expert in the energy industry. While obtaining his BA from Yale University in 1968, MA in 1970, and PhD from Cambridge University, Yergin wrote for several magazines and newspapers.

Yergin’s early writings on energy started during his postdoctoral fellowship at Harvard. During this time, he was the coauthor of Energy Future: The Report of the Energy Project at the Harvard Business School. The book turned into a New York Times bestseller, and established Yergin as an energy luminary early in his career, advising Congress and the US energy secretary at the time of the Iranian revolution. Shortly after, he co-founded Cambridge Energy Research Associates (CERA). CERA was created as a research and consulting firm to provide a reliable source of energy industry analysis.

Though Yergin has published many widely regarded books, The Prize is considered to be his most impactful one. The book presents a history of the global development of the oil industry. The timing of the publication of the book a few months after the invasion of Kuwait by Saddam Hussein propelled it into immediate relevance, making it a bestseller and a Pulitzer Prize winner. The Prize has a special place in the hearts of many young petroleum engineers, especially those involved in the PetroBowl competition.

The PetroBowl competition was first established in 2002, and since then it has grown in size and popularity to reach nearly every petroleum engineering school worldwide. Currently, different regions around the world hold regional qualifiers, and the top teams convene in a world cup-style event during each year’s SPE Annual Technical Exhibition and Conference. To give an idea of the scale, 125 teams from 37 different countries participated in the 2016 edition.

For most participating teams, reading The Prize is considered a rite of passage to just being considered for a spot. This example paints a picture of how influential Yergin has been in giving emerging petroleum engineers a proper historical background of our industry, which is not commonly emphasized in most curricula.

Yergin’s impressive résumé includes serving on the US Secretary of Energy Advisory Board and chairing the US Department of Energy’s Task Force on Strategic Energy Research and Development. He is a director of the Council on Foreign Relations and a trustee of the Brookings Institution. He is a member of the National Petroleum Council, the advisory boards of the Massachusetts Institute of Technology Energy Initiative, Columbia University Center on Global Energy Policy, Russian Academy of Oil and Gas, and Singapore’s International Energy Advisory Board. Yergin serves as a director of the US Energy Association, the New America Foundation, and the US-Russia Business Council. He is a “Wise Man” of the International Gas Union. In 2012, he became an adjunct professor at the China University of Petroleum in Beijing.

For Yergin’s lifelong achievements in energy and its promotion of international understanding, he has been recognized with the US Energy Award in 1997. He also received the Charles Percy Award for Public Service from the Alliance to Save Energy, and the International Association for Energy Economics gave Yergin its 2012 award for “outstanding contributions to the profession of energy economics and to its literature.”

The prime minister of India presented Yergin with a Lifetime Achievement Award in 2014. For his distinguished contributions to energy policy the University of Pennsylvania awarded him its first Carnot Prize in 2015.

Yergin has generally criticized the imminent peak oil theory, which suggests that oil will eventually peak and the global production will decline thereafter. Proponents of peak oil theories have predicted at least four times that oil production is going to peak, first in the 1880s, then after each of the two World Wars, and later in 1970s, although we have continued to see rising production to an extent where recently major OPEC producers had to reduce the production to curb the oversupply of crude oil.

Yergin has proposed that Hubbert peak theory ignores effects of economics (like in recent years) and technological advancement (e.g., frontier drilling in deepwater Gulf of Mexico). Instead of a peak oil phase, production will have more of a plateau in Yergin’s opinion. In an article published in The Wall Street Journal in September 2011, Yergin writes that in his view we have decades of further growth before production will flatten out into a plateau.

In 2014, the first James Schlesinger Medal for Energy Security was awarded by the US Department of Energy to Yergin. Ironically, the award was named after Schlesinger, who was an advocate of the peak oil concept.

During his recent visit to the Yale University to deliver the 2016 investiture keynote address, Yergin gave a message to the graduating class, which may be widely applicable to today’s millennial generation. Citing a recent poll, which found that 51% of American millennials do not support capitalism, he stated, “Confidence is the essential foundation of a market economy; when that confidence isn’t there, markets don't work.”

Yergin concluded his talk by giving graduates two pieces of advice: Firstly, he advised them to find meaningful, satisfying careers of leadership and accomplishment, and second, to help rebuild the balance of confidence on which this world depends. Those two seem to be equally relevant for young oil and gas professionals in the current environment.

Cole, J. 2016. Daniel Yergin on the Balance of Confidence.

Aman Gill is an engineer-in-training working as an account manager with GE Water and Process Technologies, based in Alberta. Gill has been involved with TWA since 2014 in various lead and associate editor roles. He is a member of SPE since 2008, was the president of the SPE Calgary Student Chapter in 2013, and captain of the 2013 University of Calgary PetroBowl team in New Orleans. Gill holds a bachelor's degree with a major in chemical engineering and a minor in petroleum engineering from the University of Calgary.

Victor Torrealba is a postdoctoral fellow at the Ali I. Al-Naimi Petroleum Engineering Research Center at King Abdullah University of Science and Technology in Saudi Arabia. His research focuses on chemical enhanced oil recovery (CEOR) and simulation of naturally fractured reservoirs. He holds BSc (Hons), MSc, and PhD degrees from Pennsylvania State University in petroleum engineering. During his PhD he interned twice at Chevron Energy Technology Company, where he worked on CEOR simulations.

Gaurav Seth is a reservoir engineer at Chevron's Energy Technology Company (ETC) based in Houston. As a part of ETC, he provides reservoir simulation and production modeling consultancy for Chevron's assets worldwide, including those in Kazakhstan, Azerbaijan, Brazil, and Australia. Seth has been an active member of SPE and has volunteered for the eMentoring program, technical journal review committees, and SPE conference technical review committees. He holds a master’s degree from University of Tulsa and a bachelor’s degree from Indian School of Mines Dhanbad, both in petroleum engineering.

Jaspreet Singh Sachdeva is a PhD candidate at the University of Stavanger in Norway. He is working on rock-fluid interactions and rock mechanics at the National IOR Centre of Norway. Earlier, he worked as a reservoir engineer at Jindal Petroleum. Sachdeva represented the National IOR Centre in Forsker Grand Prix 2016, a Norwegian national-level research dissemination competition organized by the Research Council of Norway. He holds a bachelor’s degree in applied petroleum engineering from the University of Petroleum and Energy Studies, India, and master's degree in reservoir engineering from the University of Stavanger.