The Impact of Oil Price Volatility in Russia and China 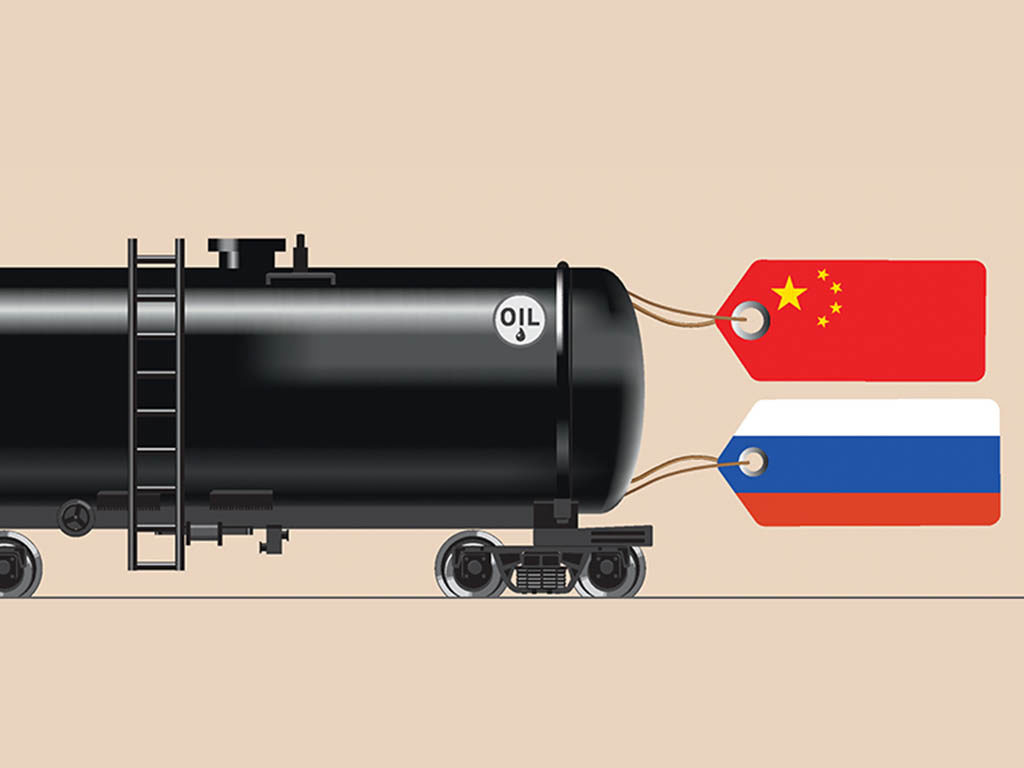 When the prices of oil and gas spiral upward or downward, the effects are felt around the world. Economies of some countries are affected more than the others, especially, if they are large oil-exporting and -importing countries. Four of the five largest oil-importing nations, China, Japan, India, and South Korea, are in Asia and collectively import more than 15 million B/D of oil, according to the CIA World Factbook 2013–14. Any shift in oil price results in huge adjustments to these countries’ national budgets. The world’s largest oil-exporting nations include Saudi Arabia, Russia, Iraq, Iran, and Nigeria. Collectively, these nations have the capacity to dominate the global oil economy.

Russia tops the chart as the largest country in the world by area, encompassing 6.6 million sq miles. It leads the political scene as one of the most powerful and developed countries in the world and maintains its innovative edge as a leader in nuclear power and space research. For a country with so much independent power, Russia’s economy remains hugely dependent upon the energy and mineral resources that it holds.

Blessed with abundant resources, Russia exerts huge geopolitical influence on its European neighbors. Of paramount importance to countries such as Ukraine, Russia supplies 25%–30% of natural gas needs in Europe, according to the International Monetary Fund (IMF). Oil and gas fund about half of the Russian budget, reports CNN. So what happens when commodities prices fluctuate—either up or down?

Though difficult to imagine in the current price environment, what would happen in a scenario with increased oil prices? The Russian ruble becomes very strong, as more global currency is converted into the ruble both as investment capital and as currency speculation. If Russia decides to restrict its exports, the negative impact of a supply shock will be keenly felt by the oil-importing nations, as the price will need to rise to clear the market. As a result of high oil prices, the inflation rates in the country are controlled and low interest rates increase the investments in new businesses and real estate.

When speaking of investments, one cannot forget that rising oil prices also trigger more investment in the unconventional hydrocarbon exploration and deepwater oil and gas fields. High-price environments allow investments in research for advanced technology to optimize extraction of resources, resulting in job creation for locals and expatriates.

Apart from oil and gas, Russia boasts of many other noteworthy commodities, such as palladium, platinum, nickel, and aluminum. Although the prices of these commodities do not directly affect the economy of the nation, they provide a broader economic confidence and rising oil prices contribute to higher levels of activity in the industries in which these minerals are processed and exported.

The gains on rising oil prices are fast forgotten when oil prices come plummeting down like they did in 2008 and more recently in 2014–15. With oil revenues making up about half of the government budget, the sharp decline in prices can spell disaster for the Russian economy. Recent reports by the IMF, Deutsche Bank, and Fitch Rankings estimate that Russia needs a global oil price of USD 98/bbl to cover its budgetary expenditures. According to the BBC, the country loses about USD 2 billion in revenue for every dollar drop in oil price.

The Russian ruble has slipped by more than 25% against the dollar since the start of 2014 because of falling oil prices and Western sanctions against Moscow over the conflict in Ukraine. So far, Central Bank of Russia has been struggling to deal with this crisis. On 15 December 2014, the country hiked interest rates from 10.5% to 17% in an attempt to stop people from selling off rubles.

Russia’s draft budget for 2015 assumes oil at USD 100/bbl. Below that, it will be hard for President Vladimir Putin to keep his spending promises. Incidentally, similar events occurred in the mid-1980s, when falling oil prices left the indebted Soviet Union cash-strapped.

If falling oil prices are detrimental to the economies of oil-exporting nations, how does that contrast with the increased buying power of an oil-importing nation such as China?

Considering it is the world’s fourth largest producer of oil, China’s oil exports may seem surprisingly low, until we consider that the country is also the world’s second largest consumer of oil, after the United States. According to a US Energy Information Administration report in 2013, nearly 45% of China’s oil consumption was met by domestic production. China chooses to use much of its production locally to drive its huge manufacturing and industrial sector instead of putting the oil on the global market. 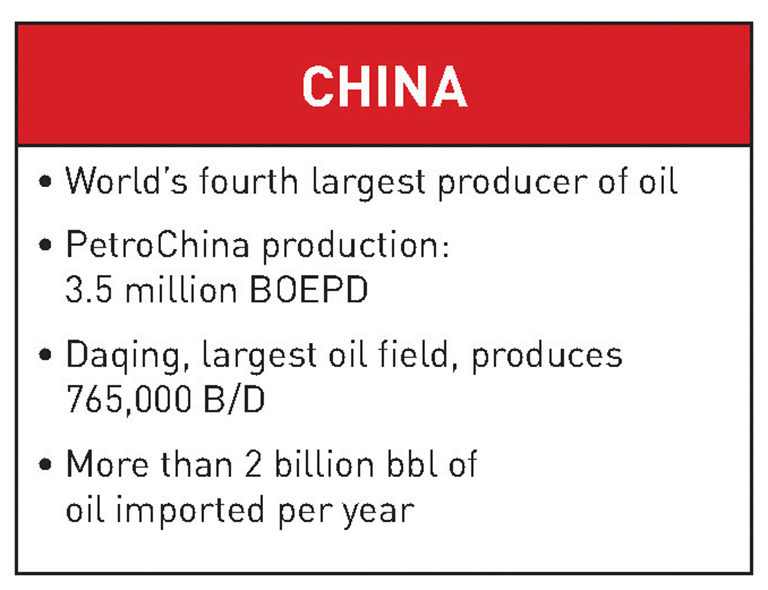 As one of the world’s leading oil importers, China brings in more than 2 billion bbl each year. Historically, China’s seemingly insatiable demand has helped sustain commodity prices at levels higher than recent prices. However, China’s demand for oil appears to be slowing. The year-over-year growth in demand from 2012 to 2013 was 136,000 BOE compared with an average increase of 432,000 BOE each year from 2000 to 2012. This softening in demand has in part contributed to declining oil prices.

In addition to imports, a key strategy that China’s national oil companies are adopting is to acquire oil and gas assets in other countries. China National Petroleum Corp. holds hydrocarbon assets in nearly 30 countries and some of the heaviest investments are in unconventional assets such as shale gas and tight gas formations. A key reason behind these investments is to develop the knowledge and technology to transfer back to China’s own increasingly challenging  fields.

Many of these acquisitions, occurring over the past 3 years, have been through bilateral oil-for-loan agreements with countries such as Russia, Venezuela, Ecuador, and Kazakhstan. Through these agreements, China provided capital for energy exploration and infrastructure in return for oil and gas imports at hedged prices. Depending on the terms of the agreements, China may be stuck with importing oil at prices much higher than market value for some time, or may have found a winning ticket.

The Chinese government may be able to take advantage of low commodity prices to reach its targeted gross-domestic-product (GDP) growth as manufacturing and construction make up almost half of China’s GDP. Lower crude oil costs could have favorable effects on the price of plastics and other synthetic materials that go into these products.

Similarly, low oil prices reduce transportation costs, which could favor more products being exported from China. Unlike in the US, labor is extremely cheap in China’s developing regions. By reducing the fuel costs, which make up a significant share of the exporter’s total costs, overseas shops could undercut domestic manufacturing.

In addition to national economies, local consumers also feel the effects of a shift in commodity prices. Consumers typically are thrilled when the “price at the pump” for gasoline decreases. Unlike in the US and other free market economies, China’s gas and diesel prices are set by the government, so consumers may experience a price lag when crude oil prices increase or decrease. Furthermore, when the government does adjust pump prices, many citizens may be oblivious to the savings since public transportation is prevalent in many parts of China.

The more we think about the oil prices, the more is the realization that the pace of demand for oil and gas governs the availability and access to supplies, technological developments, production costs, and government policies. The interdependence between demand and supply cannot be ignored while considering the effects of fluctuations in oil prices on the cost of commodities.