Preparing Engineers to Be Job Makers, Not Job Takers 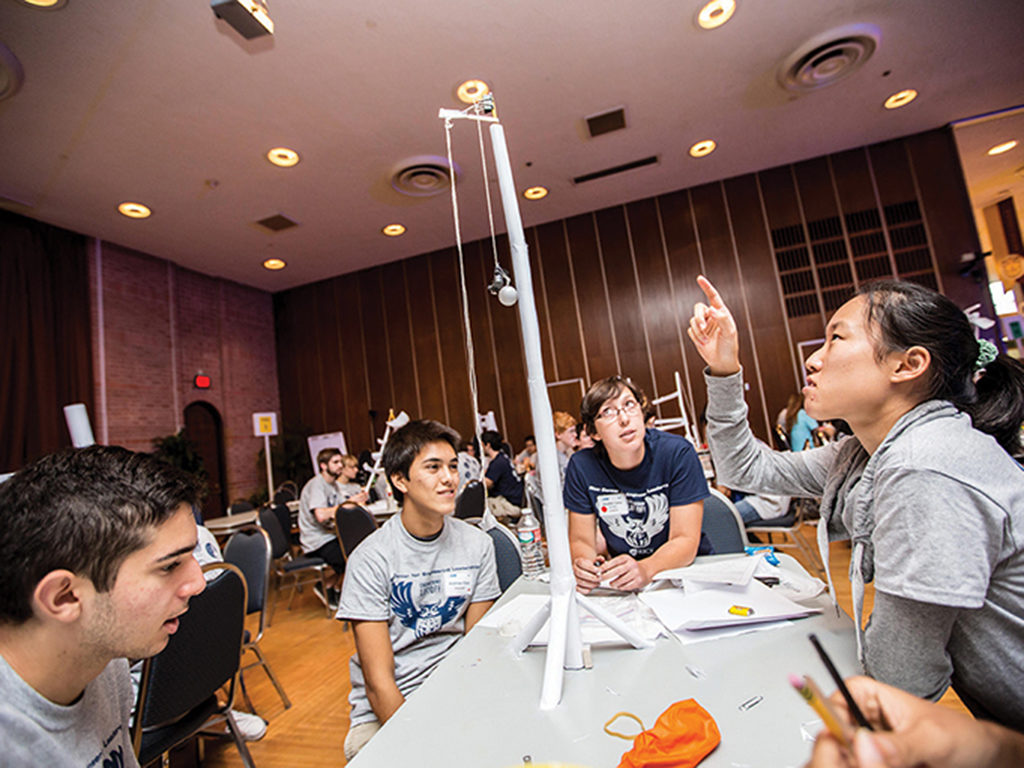 The entrepreneurial spirit is an increasingly valuable asset in today’s economy. The same toolkit used to launch a business from scratch turns out to be quite applicable to larger, more established organizations as well. Mature energy companies and even nonprofit or government bodies have just as much need as startup companies for ambitious employees who have the ability to identify problems, listen to customers/stakeholders, marshal resources, and inspire teams to create efficient solutions.

The George R. Brown School of Engineering, part of Rice University in Houston, Texas, is tasked with preparing the next generation of engineers for careers in academia or industry. In fact many of the students could spend the majority of their professional lives working in the energy industry. However, it is difficult in a traditional classroom setting to imbue engineering students with the spirit of entrepreneurialism. In addition, there is a dearth of rigorous scientific research about entrepreneurship and its effective development. So, if entrepreneurialism is an increasingly important skill for engineering careers, how does a university prepare its students today for their careers of tomorrow?

As part of Rice’s vision for its second century of existence, the Rice Center for Engineering Leadership (RCEL) was given the specific task of helping Rice engineers develop into inspiring leaders, exceptional team members, and bold entrepreneurs. RCEL’s approach to entrepreneurship development is based on three key elements:

1.  A curriculum built on rigorous academic research on entrepreneurship. Myriad authors, speakers, and bloggers profess they have unlocked the formula for entrepreneurial success. However, the evidence presented is largely anecdotal, and more often than not using their formulas only demonstrates their ineffectiveness. RCEL’s entrepreneurship curriculum uses concepts from “effectuation,”  which the Society for Effectual Action (SEA) touts on its website as being “a logic of thinking, discovered through scientific research, used by expert entrepreneurs to build successful ventures.” The members of SEA have created a body of research spanning multiple academic institutions and industry partners around the world.

2.  Programming that is experiential in nature. Students are required to practice entrepreneurship rather than just study it. This requires interaction with real-world entrepreneurs, not just with academic faculty.

To implement these elements, RCEL has taken a three-pronged approach: curricular, co-curricular, and extracurricular.

The curricular approach is based on the classic academic model in which students take courses offered by faculty. Students complete assignments, and receive course credit and a grade. Rice offers several curricular entrepreneurship courses, ranging from those that are industry-specific to those broadly scoped in nature and from those that provide a light exploration of entrepreneurship to those that are deep experiential dives.

RCEL’s most significant “deep-dive” entrepreneurship course, ENGI 540, is a lean startup course in which students must deliver a business—not a business plan—by the end of the semester. This course attracts students from all disciplines, from engineering to business to architecture to the liberal arts, at both the undergraduate and graduate levels. The number of male and female students is about equal, and students come from a broad spectrum of backgrounds, cultures, and continents.

Students must perform a lot of work before being accepted into ENGI 540, including an initial application during the semester before enrollment and a significant amount of preparatory homework the summer before the semester begins.

The requirement to perform preparatory work serves two purposes: It weeds out the least committed students, and it ensures that students are ready to hit the ground running on the first day of class. In essence, students spend the summer developing and refining multiple startup ideas. They arrive on the first day of class ready to pitch their ideas to their classmates.

During the first day of class, students self-organize into startup teams that will focus on the venture ideas they found most promising. No single-student teams are allowed; if a student fails to compel students to join his or her venture, the venture is dead. This closely models the real startup world in which very few lone founders make it very far. The self-organizing policy also creates a free market in the class for talent as teams with skill gaps try to entice key students to join their cause. The breadth of student disciplines and backgrounds ensures that engineering students gain experience working in highly diverse teams—again modeling the real startup world.

The ENGI 540 semester comprises 13 weekly cycles of startup development, during which the students adopt the lean startup mantra of “getting out of the building” to gather feedback from real customers. Each week students must present at the beginning of class what they accomplished and what they learned (rather than just what they did) during the previous week.

The aspect of ENGI 540 with which Rice students struggle the most is the absence of a clear grading rubric. Since they first set foot on campus, Rice students have been optimizing their efforts around a causal grading rubric (“If you do x, y, and z, then you will get an A”). However, predictable causality has no place in the world of entrepreneurship. We deliberately keep our grading methodology concealed from the students in order to increase their comfort level under conditions of heightened uncertainty—a critical skill for entrepreneurs.

At the end of the semester, student teams pitch their ventures to evaluators—an audience of venture capitalists, angel investors, corporate development officers, academic leaders, and entrepreneurs.

Each evaluator is given a finite amount of virtual currency to invest in as many or as few ventures as he or she sees fit. RCEL uses this investment distribution as the primary determiner of student grades. The final pitch isn’t the first time evaluators have heard about the student ventures. Each evaluator has been introduced to the class over the course of the semester as a potential mentor and network connector. Most evaluators work closely with student teams for months so they can make a much more informed final investment decision than if they had just heard a pitch for the first time.

This approach supplements nonentrepreneurial academic curricula with entrepreneurial practicum. There is a lot of intellectual property being developed in every lab and every classroom across the Rice campus every day. However, the faculty leading those labs and classes often lack the entrepreneurial expertise to help students commercialize their work.

For example, in a course titled BIOE 428 (Bio-MEMS [microeletromechanical systems] and medical microdevices), several student teams designed and developed nanoscale biosensors. Through the course’s entrepreneurship module, they identified, sized, and validated target markets, and honed in on some applications for their inventions—one of which ultimately became the basis for a startup company.

RCEL also provides entrepreneurial support that is completely unrelated to academic coursework. Last summer, RCEL, in partnership with the Rice Alliance for Technology and Entrepreneurship, launched OwlSpark, an on-campus technology startup accelerator for Rice entrepreneurs. OwlSpark—itself a startup that started in ENGI 540—provides funding, space, and mentorship for Rice’s most innovative startup ideas.

How will we know if our efforts are successful? How can we measure the efficacy of our actions? Most organizations like RCEL choose relatively simplistic entrepreneurship measures—such as number of startups launched or total dollar amount raised. However, these metrics gauge activity levels, not results.

Academic institutions, in particular, are prone to use metrics such as the number of students enrolled in entrepreneurship courses.

Even if we included all the students impacted by the co-curricular and extracurricular entrepreneurship offerings at Rice, we would still be measuring means to ends and learning nothing about our efficacy in achieving those ends. In startup jargon, these are referred to as “vanity metrics” because they look pretty but, at best, offer no real insight and, at worst, give a false sense of confidence that leads to complacency.

It will probably be years before we can really tell if RCEL’s efforts have been effective.

In the meantime, however, we have turned to a tool gaining significant use in the marketing industry: Net Promoter Score (NPS). Using an extremely simple question—“How likely would you be to recommend Product X to your peer group?”—and a rating system based on a scale from 1 to 10, the team behind NPS has had success segmenting customers into Promoters (9s and 10s), Passives (7s and 8s), and Detractors (1 through 6).

In 2012, RCEL began using the NPS system to gauge the perceptions of its entrepreneurship constituents: Rice students, faculty/staff, alumni, entrepreneurs, investors, and even people with no Rice affiliation whatsoever. Our hypothesis was that, if we were effective in our efforts to improve entrepreneurship at Rice, that would be reflected in an increase in our entrepreneurship NPS.

Over 12 months we conducted five NPS assessments asking, “How likely would you be to recommend Rice for entrepreneurship to your fellow [peer group members]?”

In 1 year the three-period moving average of Rice’s entrepreneurship NPS improved overall by 9 points. It improved most significantly with on-campus constituents (students, faculty, and staff) but also improved consistently among alumni, entrepreneurs, and the community at large.

While we have launched dozens of startups since RCEL began its entrepreneurship efforts, we should be clear that our goal is not for students to drop out of college to launch what they hope might be the next Microsoft or Facebook.

We do believe, however, that many of the hardest and most worthy problems entrepreneurship can address require entrepreneurs to have spent significant time in the “real” world. Industries as complex as energy, aerospace, and healthcare need entrepreneurs who have been to the front lines and experienced their industry’s actual, functioning state of the art.

Our hope is that, by preparing students today to take the problem solving and design skills they hone in their engineering coursework and focus them on engineering startup companies, they will be better equipped to make significant contributions tomorrow as entrepreneurial founders, commercialization-oriented academics, and “intrapraneurs” effectively solving meaningful problems within established corporations.

Bryan Hassin is the Rice Center for Engineering Leadership entrepreneur in residence. As a “clean tech” entrepreneur with global experience, he has led businesses around the world, including Poken, R7 Solutions, and Antmachine Technologies, and is dedicated to aligning economic value with social value. Hassin received his MBA degree with honors and leadership distinction from IMD (formerly International Institute of Business Management) in Lausanne, Switzerland. He earned a master’s degree in computer science and undergraduate degrees in computer science and electrical engineering at Rice University in Houston, Texas, where he played football for the Rice Owls.

Kaz Karwowski joined RCEL in 2013 as executive director after 4 years with the Bernard M. Gordon–MIT Engineering Leadership Program as a leadership specialist. He previously served for 20 years as a leader in the US Army Infantry Branch and brings extensive experience developing leaders. Karwowski’s relevant positions in the army include platoon sergeant of a 55-soldier infantry platoon in Iraq and leader with the 10th Mountain Division in Mogadishu, Somalia, Haiti, and Bosnia-Herzegovina. He spent 5 years of his military career on college campuses, where he was responsible for the leadership development of students from MIT, Harvard, Tufts, Salem State, Gordon, and Wellesley College.