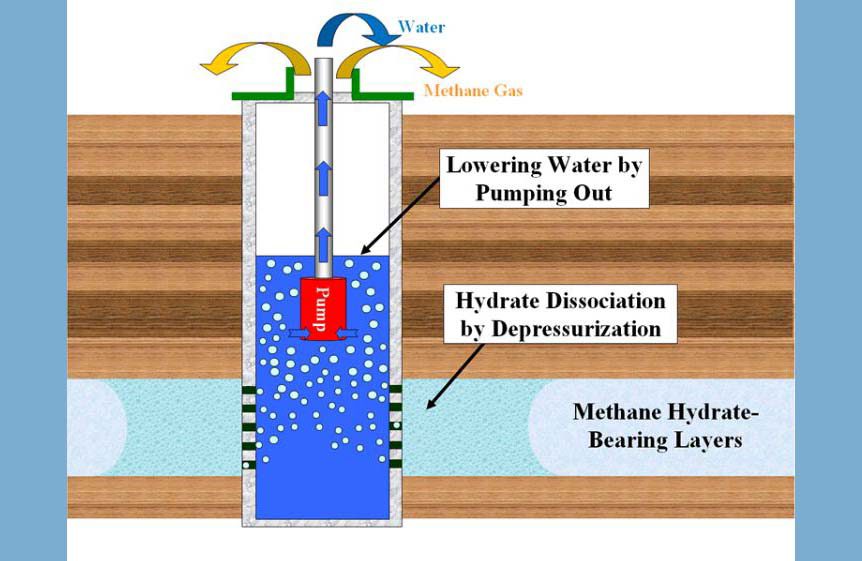 There are many challenges associated with the design of a completion system for gas hydrate pilot production test well. Some of the major challenges are described below.

Deep sea environment and geomechanical stability. Design of downhole completion equipment for the ultradeep conditions of high pressure and low temperature is a huge challenge. Also, the potential geomechanical implications including sand mobilization, sea-floor subsidence, and wellbore instability need to be taken into account beforehand. At the sea slope, slope failure should not occur due to drilling hazards and gas hydrate extraction from reservoir sediment facies. In this regard, analysis of geomechanical properties becomes critical for well design.

Flow assurance issues. There is a risk of gas hydrate reformation with the gaseous fluid near the sea floor, where low-temperature and high-pressure conditions may persist during the flow test period. To minimize this risk, the completion system needs to be equipped with induction heater (IH) in order to heat up the production fluids in the well. Also gas separation needs to be maximized from the water train. In addition to these, chemical injection lines need to be equipped in the completion system allowing injection of methanol. The IH motor is to be designed to generate additional heat into the system aiding flow assurance.

Sand incursion. Sand production and sand management are critical challenges in reservoir management and production operations for gas hydrate reservoirs. Sand production results in high removal/disposal costs, equipment erosion, and significant maintenance expenditure. The gas production from methane hydrate formation is different from conventional oil and gas formations in terms of the mechanism and the phenomenon, since low temperatures, high-pressure environment, and physical properties change in the formation as methane hydrate dissociates. As a result, it is imperative to install a suitable sand-control strategy to arrest the problem beforehand.

Problem of liquid loading. One of the challenges in the exploitation of gas hydrates is the removal of produced water when gas hydrates dissociates. This is referred to as liquid loading, and it leads to the inability of the produced gas to remove the produced liquid from the wellbore. To reduce the hydrostatic pressure in the well, a proper artificial lift system needs to be installed.

Completion Design Overview for Nankai Trough, Japan. First offshore production testing was conducted in Nankai Trough in Japan in 2013 using depressurization method. According to the design criteria, a general design of the completion system was decided as shown in Fig.1. The electric submersible pump (ESP) was selected to reduce hydrostatic pressure in the well. The IH and ESP motor were designed to generate additional heat in the system aiding flow assurance. The ESP was designed to operate within a relatively narrow range of possible production rates to allow selection of the correct pump stage for the target flow rate. In this case, there really was no data to work with on how much water would end up being produced. This was due to the fact that the only other similar tests had been conducted in the Mallik site in the Mackenzie delta area, Canada, and had resulted in relatively short flow periods. While these provided some data to allow models to be created they were not suitable to use as the design basis for a subsea test from a different formation under very different conditions. As a result, during the various design iterations, target rates from 315 B/D (50 m3/d) to 6290 B/D (1000 m3/d) were examined, which is a wide operating range to cover with a single pump stage. The different scenarios predicted that methane would flow with the majority of the water remaining in situ, to the other extreme where most of the water would be produced leading to a serious risk of sand formation and production compaction. As a result, the ESP selected was designed to cover the widest possible range of flow rates.

The other critical issue for the ESP design was to ensure that the system could handle all of the free gas. Normally in subsea wells or wells with an ESP packer, it is not recommended to use a gas separator as there is no route for the gas to flow once separated and ejected into the annulus. However, in this case, with the two flow paths available—the production string and the choke and kill line—this option was available and preferable. This means that gas and water streams could be isolated to limit the risk of hydrate formation. This, therefore, allowed the use of a gas separator at the ESP intake.

Completion assembly philosophy for pilot production testing in Nankai Trouph, Japan, conducted in 2017 was more or less same except for the sand management system. In 2013, openhole gravel pack (OHGP) system was used for the sand control operation. Shape-memory-polymer (SMP)-based sand management system used in 2017 test offers huge benefits in terms of permeability and operability over conventional OHGP pack systems. The SMP-conformable sand control system consists of an engineered polymer material compacted onto a retainer cartridge. The assembly is then installed onto a perforated base pipe by mechanical means to provide a simple modular system for openhole sand-control applications.

In previous production testing at Nankai Trouph, 2013, gravel dislocation occurred either due to sand being not fully packed from the beginning or due to displacement of the packed gravels by the mechanical forces from the sediment. As a result, production had to be terminated after 6 days due to continuous sand incursion. SMP-based sand management system on the other hand, does not require appropriate-sized gravel to be placed against the production interval, thus giving it a huge operational advantage over the OHGP completion. Also, it is porous in both compacted and expanded states with permeability of over 30 Darcy after expansion, thus giving it critical advantage over conventional OHGP completion systems. SMP system had a good degree of success in tackling sand incursion issues in the pilot production testing in Nankai Trouph, Japan, conducted in 2017.

Completion assembly design for future pilot production testing of gas hydrates should be worked out in keeping with the lessons learned from production testing in Japan and China. The gas hydrate well may be cased and completed and the hydrate zone completed open hole. One suggested improvement is the use of SMP-based sand management system for sand control based on its successful application in Nankai Trouph. A suitable well intervention system should be worked out based on the technological advancement of similar systems in use in conventional offshore environment for ultradeepwater scenario. The analysis of geomechanical properties is very critical for well design and it should necessarily be incorporated in reservoir simulation modelling. To minimize this risk of hydrate reformation near the sea floor, the completion system needs to be equipped with IH. Finally, the downhole completion system has to be designed in order to work safely on the dynamically positioned vessel. The sizing of the drilling risers, well intervention system, ESP packer etc., must be appropriately done in accordance with their applicability on the dynamically positioned vessel.

Mohinish Deepak is an engineer at Oil and Natural Gas Corp. (ONGC). Deepak started his career working on onshore rigs as a production engineer for field operations. He currently works in the research and development institute of ONGC, focussing on unconventional resources. He has around a decade of experience managing the operation, monitoring, and control of various onshore and offshore assets and procedures and carried out analysis and simulation to mitigate material failures. He also has experience doing nodal analysis for ONGC fields, optimizing networks by incorporating suitable lift modes. He provides training and mentoring to field personnel and ONGC graduate trainees in various facets of production technologies in oil and gas industry. Deepak holds a bachelor’s degree in mechanical engineering from Manipal Institute of Technology, India.