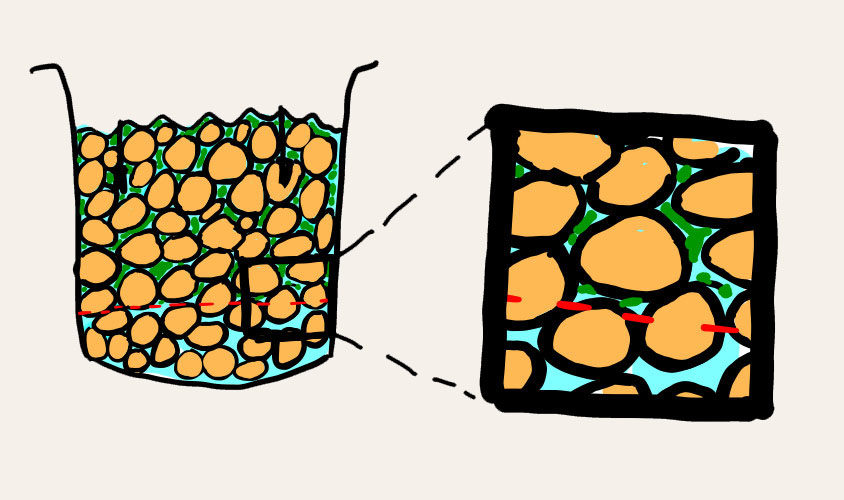 As a petrophysicist, part of our main focus is to see how good the reservoir properties are, one of them being the porosity (the other one is permeability). The porosity is an indicator of how much empty space is inside your rock that could be filled with water and/or hydrocarbon.

However, the tricky part is "porosity" from porosity log is never a measurement; it is a calculation, from what we think might represent the porosity of the rock. In fact, none of the porosity logs actually measures "porosity," not even neutron log (even though it says "xx" porosity unit).

"Porosity" is never a measurement, it is a calculation.

In density logs, which measure electron density and transform it into bulk density, porosity is calculated by assuming the matrix density and fluid density. Neutron log measures the ratio of count rate from the rock, which is equivalent to how much hydrogen index it has. Sonic log measures the travel time, from which we calculate the porosity by assuming the matrix travel time, fluid travel time, the compaction, etc. I repeat, none of them actually measures porosity, they measure the "physical properties" of the rock by calibrating it to certain sets of standard, assumptions, and calculate what might the porosity be based on those.

Rocks can have a mix of grains with different densities, an assumption on the matrix density could miscalculate the porosity from density log. Neutron log is, I personally think, is the worst of all; first, the porosity generated from neutron is calculated based on certain matrix type, sandstone or limestone, thus it is fixed; unlike density, where you can actually give "special" matrix density suppose you have routine-core analysis data (RCAL) data.

With neutron log porosity, you just have to deal with sandstone or limestone matrix, nothing in between. Second, the neutron porosity is mainly affected by the amount of hydrogen index. It assumes the hydrogen index is in the fluid, hence the porosity. However, the hydrogen content can manifest not only in fluid but also in a rock matrix, i.e. clay mineral, coal, etc. Not to mention that the neutron log needs to undergo many environmental corrections before it can be used properly.

To me, Neutron log is just not as flexible and as robust to calculate porosity, compared to density log.

To address the "elephant" in the room, for a quick look, if I have to choose, I personally prefer calculating porosity based on density log only (assuming no additional data except logs). For one, the basis of density is bulk density; I can change the scale to make it read porosity from any number of matrix densities, be it limestone, sandstone, dolomite, even special lithology (suppose we know it from RCAL).

Second thing, the matrix density of mixed lithology of sandstone and clay, for example, are sometimes very much close to the 2.65gr/cc of sandstone matrix density, especially Illite and Kaolinite groups (~2.6 gr/cc to 2.8gr/cc). Mixing of both sometimes provides a number close to what we already use to calculate porosity. Last but not least, density log undergoes less environmental corrections compared to neutron log.

Got to admit, back when I was still new in the petrophysics world, I thought density-neutron porosity sourced is always the best. Well, now I know after several years of working, I was wrong.

I guess digest it first, learn later mentality works just fine for me.

Aditya Arie Wijaya is a petrophysicist at Halliburton. He started his career as a reservoir geologist before joining Halliburton in 2014. At Halliburton, he is supporting multiple countries in the Asia Pacific region in open-hole and cased-hole analysis. His expertise is in pulsed-neutron analysis, laminated sand-shale analysis, and cement-casing inspection analysis. He is a member of the Society of Petrophysicists and Well Log Analysts (SPWLA) and was a board member of SPWLA Indonesia (2016-2018). Wijaya holds a bachelor’s degree in geological engineering from Gadjah Mada University, Indonesia.