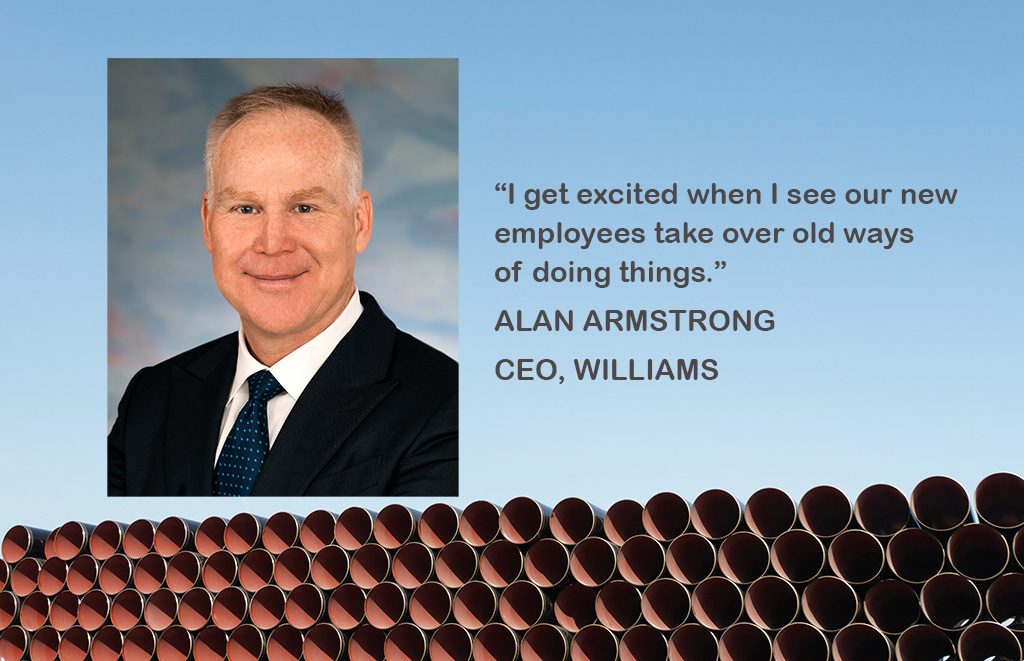 The Way Ahead interview team editors Bruno Rivas, Thomas Shattuck, Victor Torrealba, and Esther Umeh spoke with Armstrong on a number of topics, including his personal experiences, the history of Williams and the midstream oil and gas industry, as well as his advice to young professionals.

You joined Williams shortly after graduating from college. What made you decide to go into the midstream business?

My family has a long history of engagement in the energy industry, so it was a natural fit for me. Both my grandfathers, one grandmother, and my mother and father worked for what was then Phillips Petroleum Co., and my uncle led the design team for the first major offshore platform in the North Sea. I was familiar with the industry, and I really wanted to be involved in the design and construction of large-scale infrastructure. I studied civil engineering at the University of Oklahoma, and my first job at Williams was as a design engineer, automating old compressor systems for Cities Service Gas pipeline. My family had great respect for Williams, and it was exciting for me to think about building pipelines around the world at the time.

When did you realize that you wanted to pursue a managerial path?

I remember thinking early on in my career how much I loved the company, its people and what Williams stood for, and I knew I wanted to help make a difference for the company. Therefore, I was always trying to put myself in a place where I could have more influence over the organization’s path and help it be successful. Even before I assumed a formal leadership position, I had opportunities to manage large projects and teams. These experiences taught me how to communicate with people, how to motivate a team, and how to get people excited about the work we were doing. That is still a part of my role today.

In your own words, what does it take to become a leader in the energy industry? What are the main responsibilities of the role?

As a leader in the energy industry, it is your job to set the big picture and keep the organization focused on the path forward. You must surround yourself with people who want to be a part of that vision, and who are excited about the vision. And because our business is so capital intensive, you must have your eyes wide open to risk management, risk tolerance, and problem solving. You really have to be comfortable with the risks you’re taking and clear about the risks you’re managing in order to be successful.

The Evolution of Williams and the Industry

How has the company evolved through the years, and what impact did the shale boom have on that evolution?

Williams has certainly evolved. When I started, the Williams Companies owned many different businesses in several different industries. Our early leaders saw value in diversification, so rather than invest in being the very best operator, they would invest in various businesses. Over time though, as we watched what the market was rewarding, we realized that the value was no longer in diversification but instead in being the best operator. It was clear to us that as the industry matured, we had to make the shift from a holding company to an operating company. To that end, we sold off several businesses in the 2000s, and when I became CEO in 2011, we spun off our E&P business so we could bear down on being the very best in this space.

Of course, the shale boom very much played into that shift as well, bringing predictability and affordability to supply and allowing us, as a service provider, to set up continuous improvement operations because we are doing more of the same in the same area. As a result, we have grown tremendously and the US. E&P companies are the best in the world at getting natural gas out of the ground in a cost-efficient manner; to the point where the downstream industries now depend on affordable natural gas for their operations. This makes our infrastructure business so critical as we want to be able to keep up with rapid growth and demand.

I think one of the biggest challenges the midstream industry faced was a result of deregulation in the market back in the mid- to late 1980s. We no longer operated under tariffs and had to go out and contract for business. It required a shift in our thinking from that of a utility mindset with limited competitive threats to a more entrepreneurial, aggressive mindset.

Today one of our biggest challenges continues to be opposition to the consumption of fossil fuels. We have groups fighting us, not over siting and typical land use issues, but fighting us to block the use of fossil fuel energy entirely. We must continue to be very precise in our operations now that these groups are looking for foot faults. I also feel the midstream industry has been slow to innovate and adopt modern technology—while we have been cautious and risk-adverse, the E&P companies have done a better job at deploying new technology, so there’s an opportunity for us to be bolder in this space.

How has digitalization and the “Fourth Industrial Revolution” impacted how Williams thinks about the business?

There is a tremendous amount of opportunity for innovation and digitization in the midstream industry. I get excited when I see our new employees take over old ways of doing things – they know there is an easier way to do things and they seek out those solutions. Their comfort and familiarity with new applications and technologies is of great value to our industry – the space is so ripe for bringing in new technology that will make our work simpler.

How do you think global LNG markets will evolve over the next 5 to 10 years? What impact will that have on the US natural gas markets, and Williams in particular?

We will continue to see growth and demand in the global LNG market over the next 5–10 years, and the US, with its stable political and legal environment, will play a critical role in this area. Gas continues to be three to four times cheaper than oil, not to mention cleaner, and we are seeing the cost to liquify and transport gas come down steadily. I think we will see the LNG export market grow much faster than currently predicted, and the US will pick up its fair share of this growth and demand. LNG exporting requires significant capital investment in facilities, and it is difficult to make these investments in foreign countries. Our safe and steady access to resources is very valuable, and we clearly are the lowest-cost provider when it comes to gas production across a major resource base.

You have worked at Williams in both engineering and commercial roles. How can young professionals strike the balance between technical and commercial skills over the course of their career?

If you want to be an effective leader in today’s energy company, you must have a strong head for both the engineering and commercial aspects of the business – there’s no excuse for not understanding both. In an integrated energy company, you can’t afford a single specialization. You have to stay curious and passionate about all aspects of the business, no matter the role.

What was the biggest challenge you faced in your career? What lessons did you learn from it?

Learning to be an effective communicator has probably been the biggest challenge for me. Over the years, I have gotten better at listening and have learned from the leaders around me who were good communicators. I have a better awareness now of how to deliver a message; I recognize that you have to bring people along with you and communicate at the right pace—and sometimes repeat your message in different ways for it to fully resonate. I have also learned the value of surrounding yourself with different talents and abilities. Learning to glue all those talents together makes for a solid and successful team.