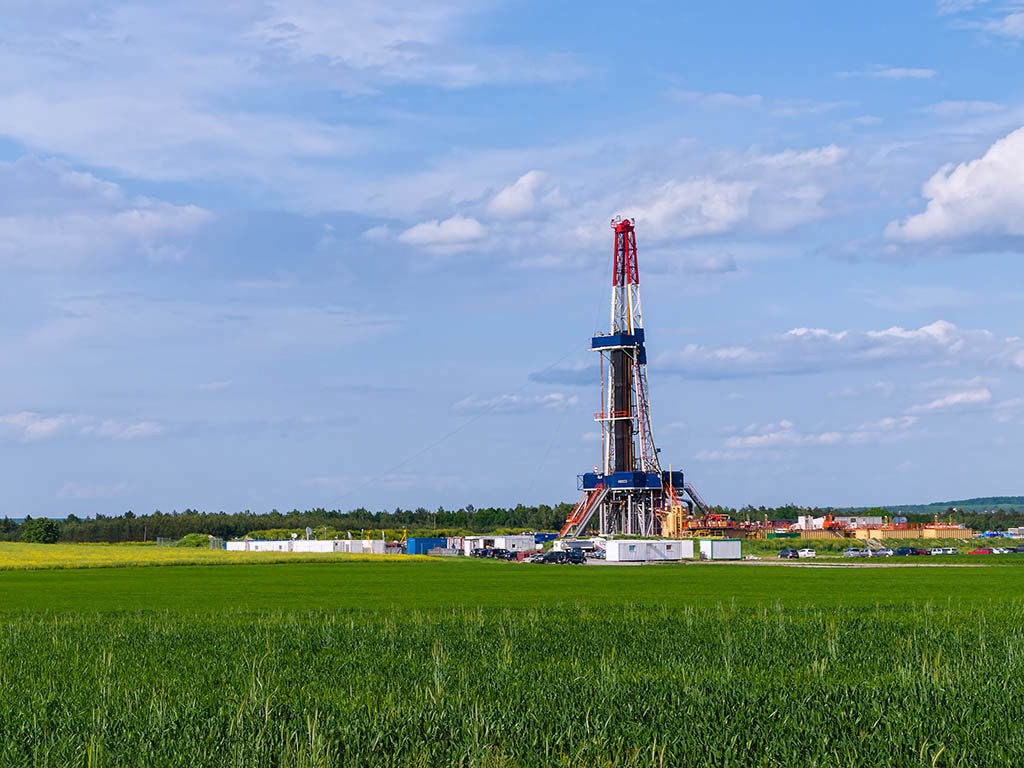 New Challenge for the Industry, Great Opportunities for YPs

“A game changer,” “a revolution,” and “a paradigm shift”—those are descriptions of the development of unconventional resources (UCRs) seen in the United States news media. The Wall Street Journal called unconventional gas plays “the biggest energy innovation of the decade.” For young professionals (YPs), UCRs provide the opportunity to grow with a field destined to lead the industry in the future.

How Big Is the Pie?

Kawata and Fujita (2001) quoted Hans-Holger Rogner of the International Atomic Energy Agency, who estimated gas resources of 9,000 Tcf in coalbed methane, 16,000 Tcf in shale, and 7,400 Tcf in tight sands throughout the world. Rogner ranked North America as the top unconventional gas resource holder (25%), followed by the former Soviet Union (16%), and China (15%).

Because of the availability of conventional reservoirs outside the US, worldwide unconventional plays have largely been overlooked until recently, and in many cases, they had not been studied. Based on the US experience, the need and technical capacity to produce from these reservoirs around the world is likely to emerge in coming decades.

As long as the unconventional share in the world portfolio of hydrocarbon resources continues to grow, industry professionals will have to ask whether we are ready for this “revolution.” Undoubtedly, “revolutionary thinking” is required and several paradigm shifts will occur during the journey, with the clear need to challenge the basics of petroleum engineering. UCR development presents the challenge and opportunity of the unknown. Experience is key, but fresh, new ideas will drive the future.

A survey was conducted during the third quarter of 2011 among 90 SPE YPs and student volunteers from various locations and covering a range of disciplines, with the key emphasis on what UCR development will bring to YPs. 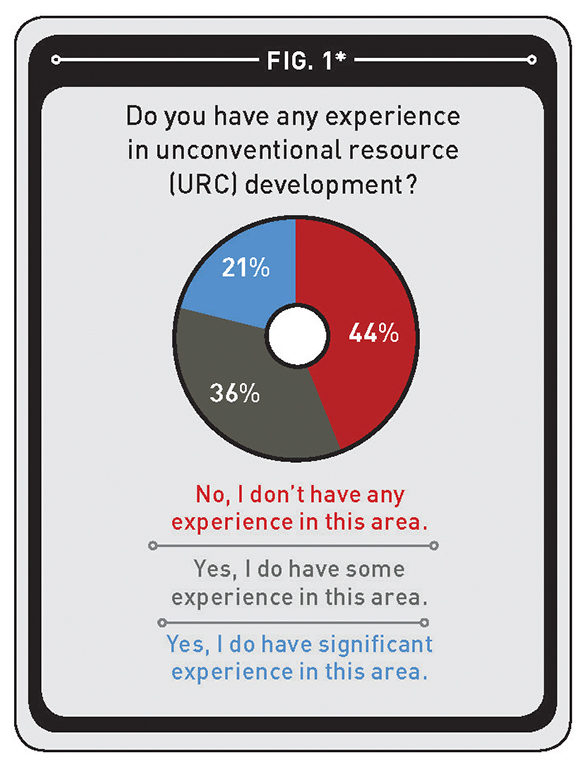 Notwithstanding the relatively low experience level, 57% said they would pick UCR development given a choice between two job opportunities, assuming all other conditions are the same (Fig. 2). 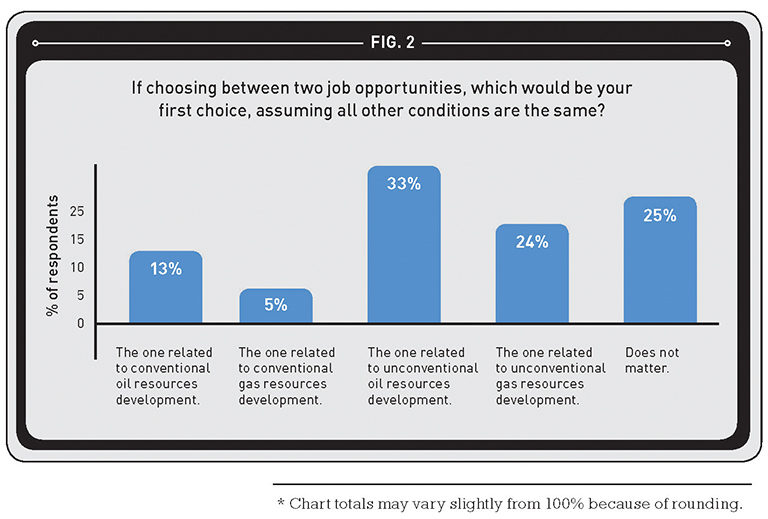 Only a total 26% of the survey group said they felt adequately equipped and educated to perform a job in UCR development, while 55% said they were somewhat ready or would need a minor transition period and the remainder said they were not ready (Fig. 3). 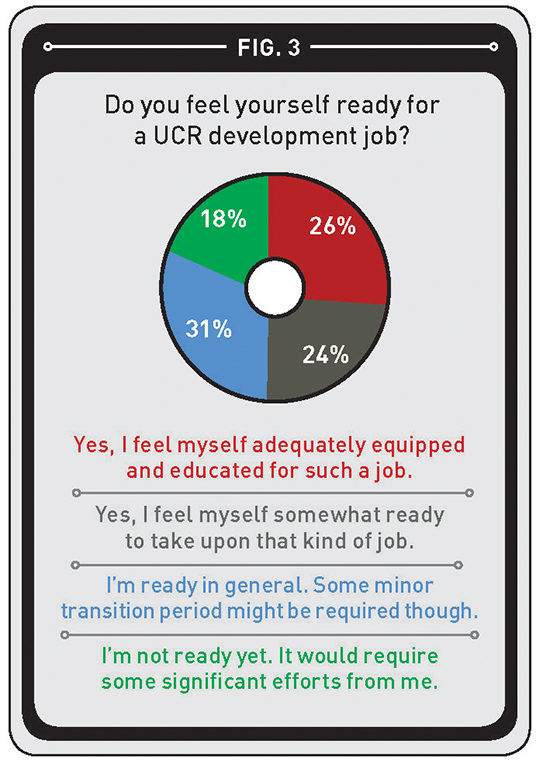 Concerning training at the university level, only 1% of respondents said that most petroleum engineering departments have adequate programs to fulfill the upcoming demand for UCR development engineers. More than half, 57%, responded that programs require updating, split almost evenly between those saying that a minor update was needed (28%) and those saying that programs were obsolete and required a major update (29%). The rest of the survey respondents, 42%, said that most university programs are generic and equip graduates with an absolute minimum, with most learning occurring at the workplace (Fig. 4). 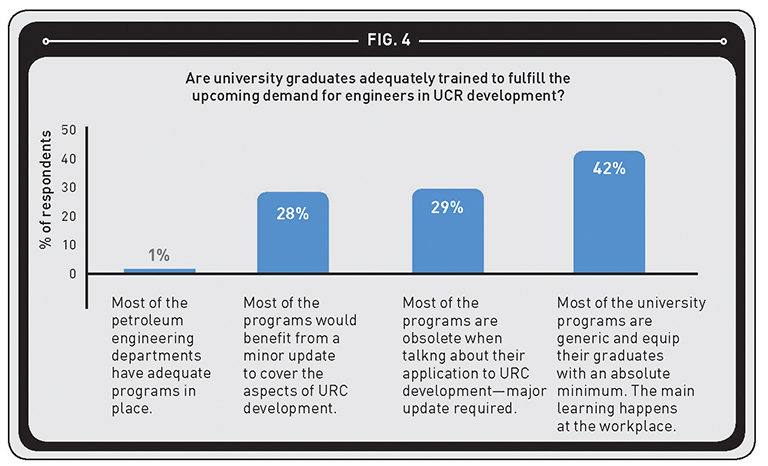 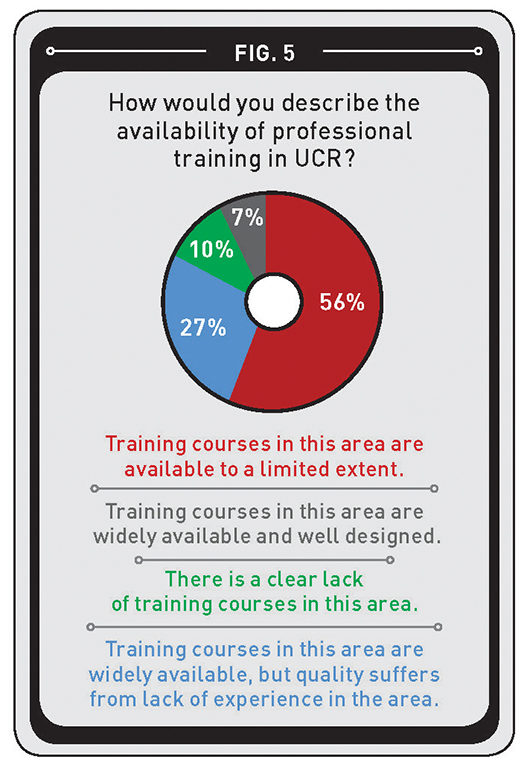 The survey results are encouraging because they show an eagerness by YPs to enter the UCR area. As training and education methods improve, YPs will be capable of contributing sooner to a field that represents so much of the future of the oil and gas industry.