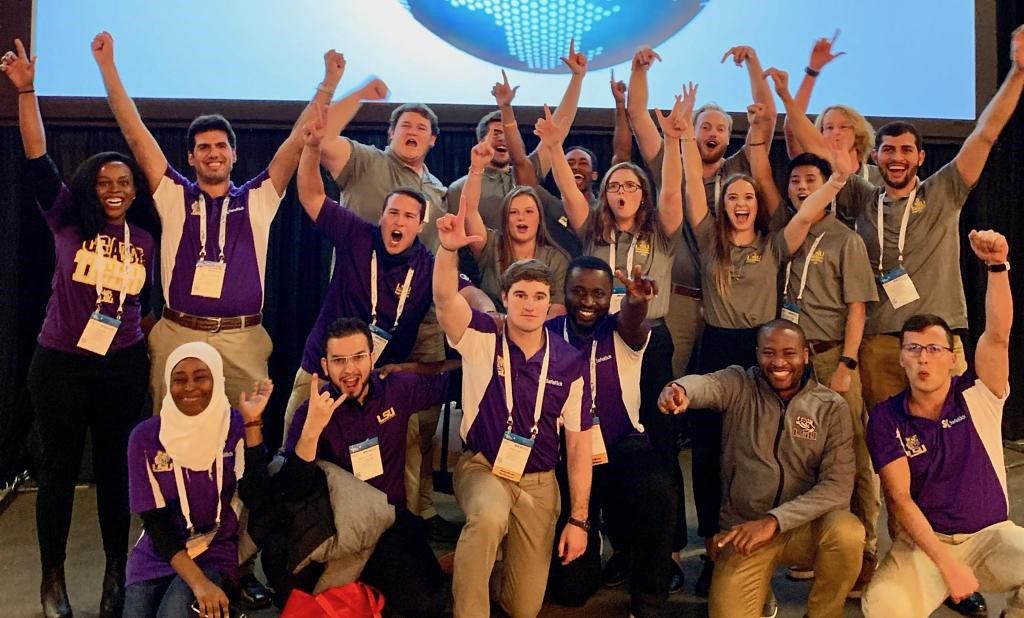 This discipline, petroleum engineering, has the unique feature that everything takes place deep underground and is mostly invisible from the surface. While this may allow mistakes to be hidden, in the same way, successes often can be overlooked, hindering reliable comparisons between practitioners’ skills and ability. PetroBowl provides an opportunity address this with direct competition, peers contending against peers to see who comes out as best.

The team from Louisiana State University (LSU) was formed on 16 November 2018 through an internal contest open to the rest of the petroleum engineering department’s students to observe. The team was diverse, consisting of students from the US, Cyprus, and Nigeria. Yet, the common educational background and goal of winning and getting to the top enabled them to work harmoniously and coherently.

The members of this year’s team were Trevor Quatroy, Giuseppe Feo, Andreas Michael (team captain), Hope Asala, Fatima Yisa, and Dayo Afekare. Quatroy is currently completing his bachelor’s degree, while all others are working on doctorates (Fig. 1).

In the team’s preparation, no stone was left unturned. This involved optimizing not only study practices but also the sitting configuration and the way the team would challenge questions when it thought the moderator or judges possibly had made a mistake. The team wanted to minimize the role luck could play as much as possible; luck had been a major factor in previous years’ championship games. The team recognized extremely well that this is a competition and not an exam; the points are available for just one of the opposing teams in every game and the team had to maximize how many of those points it earned in each game. The team’s motto was “One word at a time, one question at a time, one game at a time, point by point, until we finish.”

Because of the current format of the competition, LSU’s runner-up placement in last year’s PetroBowl Championship in Dallas gave it direct qualification for this year’s international championship, held during SPE’s Annual Technical Conference and Exhibition (ATCE) in Calgary. Nevertheless, the comfortable victory against the reigning champions, the National Autonomous University of Mexico, earlier at the regional championship in Houston gave LSU a confidence boost moving forward. Also, because of the current competition format, only seven teams from the North America region—which arguably can be considered the most competitive region in the PetroBowl qualifying process—competed at ATCE.

The draw for the international championship bracket did not favor LSU at all (Fig. 2). The team had to face Universidade Federal do Rio de Janeiro (UFRJ), the 2016 PetroBowl champion, in the first round. Despite LSU’s bad luck with the bracket draw, the team prevailed and eliminated UFRJ. This was followed by victories against the Norwegian University of Science and Technology and University Autonoma Gabriel Rene Moreno of Bolivia. At the semifinal, LSU faced the University of Texas at Austin and easily secured victory. The final was against the French Institute of Petroleum in a long, 20-minute game. After a less-than-ideal start, LSU managed to finish the first half narrowly ahead and went on to build a large gap in the second half. With about 3 minutes to go, LSU’s victory was certain and the team was able to enjoy the last few questions without pressure. The team’s hard work and dedication paid off. The scores of the games—55-41, 135-0, 196-35, 160-66, and 202-82—are reflective the team’s competitiveness.

The LSU Team would like to thank the individual donors who contributed to its traveling costs. Special thanks should go to SafeKick Empowered Solutions for its overall support. Finally, the teams thanks the faculty for maintaining a well-rounded curriculum that effectively balances theory and application. The result is on display for all to be proud of (Fig. 3).

Watch the final round here.

Andreas Michael is a petroleum engineering PhD student at Louisiana State University, researching topics related to hydraulic fracturing. He holds bachelor’s and master’s degrees from the University of Texas at Austin. Michael has broad intradisciplinary knowledge, becoming a PetroBowl World Champion with LSU in 2019 and placing second at the SPE International Student Paper Contest in the same year. His professional interests include unconventional reservoirs, petroleum geomechanics, petrophysics, economics, and geopolitics. Michael serves on the editorial board of SPE’s The Way Ahead.