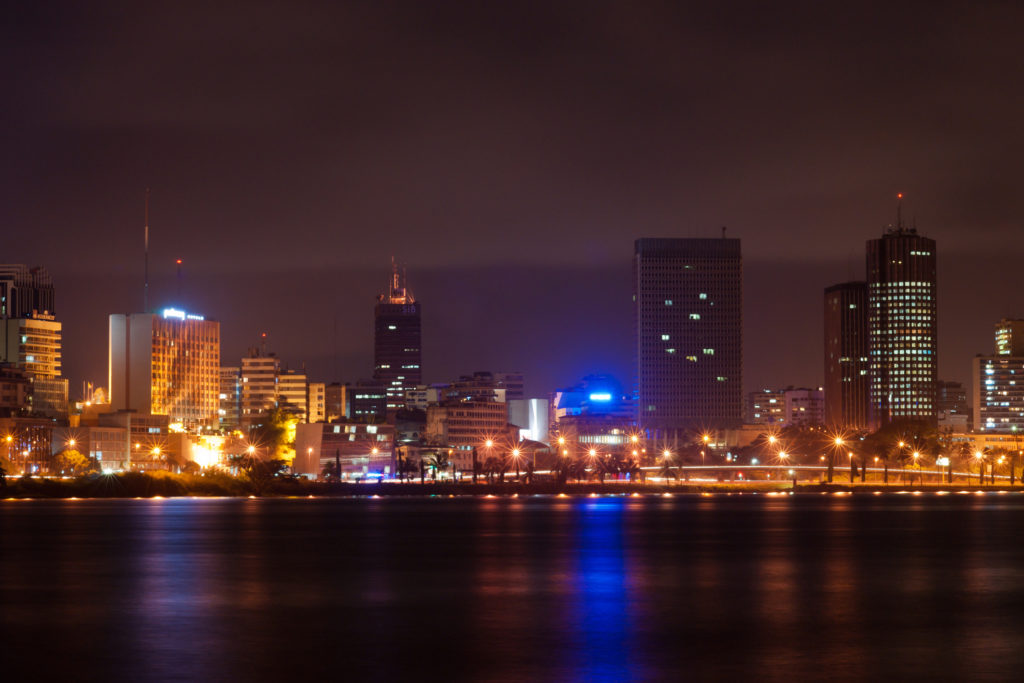 A quick search on Google reveals the appealing touristic image of the West African country of Cote d’Ivoire. The republic of Ivory Coast spreads over 125,504 sq miles overlooking the Atlantic Ocean on the west corner of Africa. It is one of the more successful post-colonial French nations, with a diverse economy. The country’s political capital is Yamoussoukro, and its financial district is in the city of Abidjan (Fig. 1). Akwaba. Welcome. Let’s embark on the journey of discovering my native country with its internationally acclaimed culture and economic prowess.

History: From Colonies to Successful Republic (Abidjan, The Pearl of Lagoons)

The history of this beautiful country has shaped it into what it is today. Cote d’Ivoire, then part of the Gold Coast venture, was perused by the French and the English empires. The West’s quest for natural resources led them to what is now Ghana and Cote d’Ivoire. Both countries abound in prized minerals such as gold, diamonds, manganese, iron ore, columbite-tantalum, bauxite, and phosphates. To date, Ivory Coast has been the 29th largest exporter of gold, and the 21st largest exporter of diamonds in the world, right before China. The interest of the Western empires grew into a structured trade system with the exploitation of agricultural products and lumber.

In 1960, the country declared its independence from French colonial control after several years of negotiations and a people-led revolution. One of the greatest fights leading up to the Ivorian independence is the women’s protest walk from the city of Abidjan to the bay city of Grand-Bassam in February 1949. The marchers were mothers, sisters, wives, and daughters of the many intellectual leaders imprisoned without cause by the French administration. Today, one can see a memorial in honor of these strong women and what they have contributed to the fight in the same city (Fig. 2). This testifies of the importance of the place of women in the Ivorian culture where for many ethnicities, the crown and power stay with the mother.

The first unanimously voted president, Felix Houphouet Boigny, strove to maintain honorable relationships with the West and France even at the onset of the new republic. He had the vision to make the republic of Ivory Coast a place of world exchange and a leader of modern development in the region. He established attractive immigration laws to retain its vast immigrant population and encourage the involvement of everyone to build the country. Within a few years, the republic had achieved the rank of first world producer and exporter of cacao and coffee beans (a rank it still holds) along with building countless schools and universities; modernizing the health system; and constructing roads for exchange, travel, and trade within the country and the West African region.

The Ivorian economy kept growing from good politics established at the proclamation of independence. The country has scored a remarkably consistent growth in its gross domestic product (GDP) and sets itself as one of the more appealing investment platforms in Africa (Fig. 3). In 2017, the World Bank estimated the Ivorian GDP at $40 billion, a 7.6% increase yearly, despite two civil uprisings. The economy is supported mainly by the agricultural and energy sectors as well as the service industry.

Other than allowing for beach-day weather all year long with isolated rainy and dry seasons, the temperate climate fosters a myriad of agricultural possibilities. Several rivers irrigate the interior and the plains. The export of cocoa beans, coffee, cotton, palm oil, rubber, cashews, rice, bananas, sugar cane, and maize make up roughly 68% of the growth accounted in the GDP. A very popular outsider product is the cassava root. It is considered the base nutrition item for a vast majority of Ivorians. I grew up eating steamed grounded cassava called “attieke.” The whole West African region has consequently adopted the attieke culture, and, today, North America imports 38,000 tons of cassava per year to satisfy the American international community’s demand and the curiosity of cassava enthusiasts.

Reliance on the prosperity created by the agricultural sector has allowed Cote d’Ivoire to develop its energy industry. Ivory Coast has 100 million bbl of proved oil reserves while producing 30,000 BOPD, consuming 20,000 BOPD, and exporting 34,720 BOPD. The development of hydrocarbon exploration and use only recently has taken center stage as part of the economic growth point for the country. In fact, up until severe drought in 2007, which is still being felt in undeveloped parts of the country, hydropower was the main and most important source of energy for the rapidly growing population. Being flushed with several rivers—the Comoe, the Sassandra, the Cavally, the Bandama and the Bia—each spanning more than 400 miles and flowing close to 1,800 m3 of water per second, the government established three electricity generation plants, each producing 1,200 MW/D. The plants set 49% electrical coverage with an estimated grid capacity of 2,200 MW/D. In order to sustain the high consumption of 5.669 billion kWh and export 872 million kWh to neighboring underdeveloped countries, the government introduced a relaxed tax and obligations environment under the policy of financial liberalization. The policy creates the opportunity for private companies to lease and produce minerals in defined sections of the coast with reasonable interest to the Ivorian government.

Financial liberalization encourages government partnerships with private companies to fulfill the vision of turning the country into the sub-Saharan electrical hub. Positive collaborations were initiated as a result. In his article “Ivory Coast Is Said To Near Oil-Block Deals With Total, Eni,” Bloomberg journalist Mieu explains the rising potential of several offshore blocks in Ivorian deep seas, namely CI-501, CI-504, CI-705, CI-706, currently in negotiations by Total, BP, and Eni. The blocks are expected to increase the coast’s daily oil equivalent production as they are located next to the 200,000-BOPD Jubilee field in offshore Ghana currently in production. Successful licenses include the 2,800-BOE/D Espoir field operated by Tullow LLC and the 40,000-BOPD Baobab and South Espoir  fields operated by the Canadian company CNR (Figs. 4 and 5). The region proves generally challenging to drill with few successes to rely on. So far, most fields require intensive waterflooding and infill drill programs to optimize production.

Along with developing competitive licensing contracts to attract international oil and gas companies, the government actively prepares the next generation of engineers and energy business professionals to ensure the vision remains alive and the Ivorian market has first pick of the industry’s next leaders and innovators. Several rounds of the brightest minds of the country have been recruited during the past 5 years to be trained in the US and the UK. They attend renowned universities with professors who have greatly contributed to the advancement of the industry. The government provides scholarship support to the qualifying students to train at these universities, gain practical experience at innovative companies, and, eventually, bring the knowledge back home.

Cote d’Ivoire lives up to the African custom of being a family-oriented and colorful society, where the priority lies equally in work excellence and in rejoicing and celebrations. Although the sociopolitical crisis of 2002 and 2011 left a heartbreaking scar on the country, the ethnically diverse population stands strong and united in their families and communities. The traditional festivals revive the modernized roads at every harvest, with thousands of people dancing, singing, and celebrating to the rhythms of local tam-tams (drums), ahoko, xylophones, traditional guitars, and other locally fabricated music instruments. On those days, one will see sacred mask dances according to each of the four main ethnical groups, the Akans, the Krous, the Mandes, and the Senoufos (Fig. 6). Those celebrations are believed to bring rain, fertility, peace, or battle victories, based on the necessity of the people. A striking performance that always caught my attention as a child was the dance of knives of the Mandes. During the dance, young boys, trained and given spiritual strength, swallow whole knives while executing acrobatic feats. They later regurgitate the knives without suffering any harm.

Aside from the traditional dances, Ivorian musicians have established a lifestyle of competition of novelty dance moves and music styles; regularly setting trends such as coupe-decale, zouglou, roukaskas dancing and many more. A few names to check out are Arafat DJ, Serges Benaud, Bebi Phillip, and Magic System. As they say: “Abidjan est le plus doux au monde.” It means, “Abidjan is the sweetest place to be in the world.”

Indeed, it is not only the sweetest place to be but also is host to enticing natural estates, modern and historical landmarks, and alluring forest and beach resorts. After landing at the international airport in Abidjan, one may steer toward the St. Paul’s Cathedral Catholic Church with its impressive glass art and the massive cross overseeing the city. A similar, yet more-important, feature is the basilica of Our Lady of Peace in Yamoussoukro (Fig. 7). The basilica is a smaller replica of St Peters of the Vatican. This 600-million-dollar gift to the Roman Catholic Church was completed in 1985 and attracts more than 200,000 tourists every year. You may get a beautiful tan in Assini and Iles Ehotiles or discover the secrets and legends of the nature-made bridge in Man while being refreshed in the waterfalls (Fig. 8). Hikers will find satisfaction on the walk up to the highest mountain of the West African belt, Mount Nimba, with its preserved wilderness or the World Heritage Tai National Park. The Marahoue reserve is home to protected elephants and other cohabitating fauna. Stop by the Musée du Costume in Gran-Bassam to learn about traditional attire, jewels, masks, and vessels and to visit many historical sites such as the slavery port and colonist houses.

Cote d’Ivoire has tremendous potential in its energy sector. With the introduction of the policy of financial liberalization, the minimally explored hydrocarbon industry may soon see an abundance of projects in its Late Cretaceous and Albanian proved reserves. Although a young nation, the population led by a daring government has continuously made strides in harnessing the strengths of the country that lie in its agricultural capabilities and the large young entrepreneurial and intellectual force to grow its economy. I hope this journey, although short, has inspired you to learn more about the real opportunities Cote d’Ivoire has to offer as an emerging platform with great potential for innovation.

Marie Aboagye holds a bachelor’s degree in petroleum engineering from the University of Houston with a minor in geology. She is a production engineer with Proline Energy Resources. Aboagye’s country of origin is Ivory Coast, which has been a great support in her education. She has a passion for human development and operations systems. Aboagye has served with various charitable organizations as leader, program planner, or lead for outreach and has given talks on making the best of life transitions.

[The article was sourced from the author by TWA editor Vikrant Lakhanpal.]