The Past, Present, and Uncertain Future of California’s Oil Business 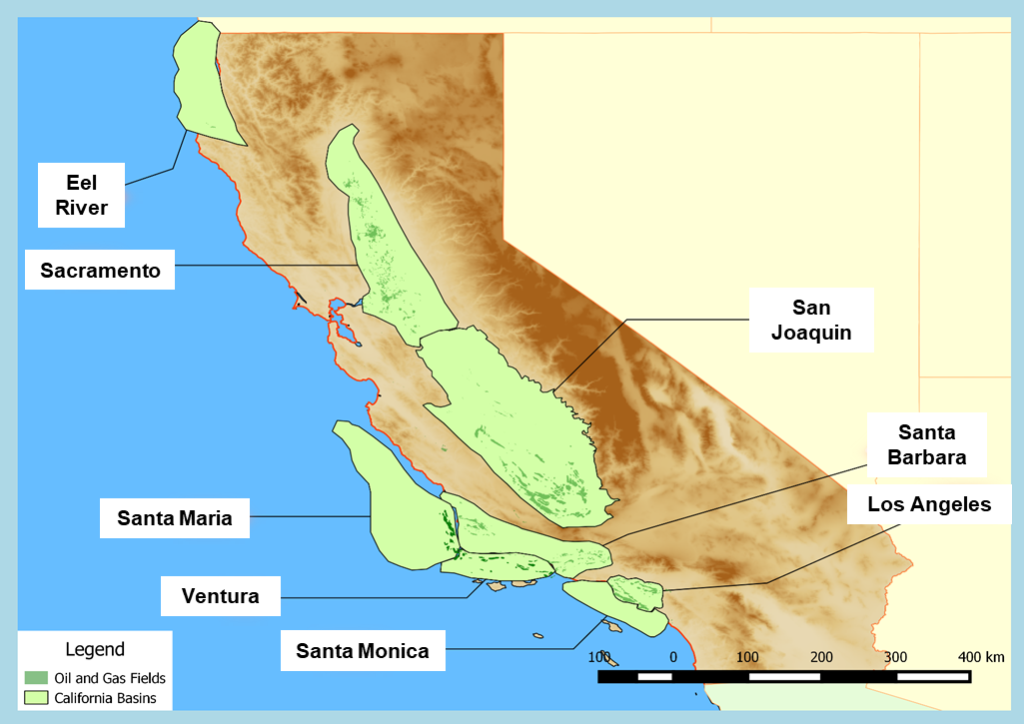 The Past: Oil Boom, Prosperity, and the 1969 Santa Barbara Spill

The history of California’s oil business is long and checkered. The first Californian well was drilled in 1865 in Humboldt County (Am. Oil & Gas Hist. Soc. [AOGHS], 2019). The state’s first gusher arrived in 1876 in the Pico Canyon oil field located north of Los Angeles and launched a statewide industry (Fig. 1A) (oilindependents.org).

Following the initial oil discovery in California, Edward L. Doheny struck the massive Los Angeles oilfield in 1892, only 35 miles south of the Pico Canyon (Fig. 1B) (oilindependents.org, AOGHS 2019). The main character of the 2007 award-winning film “There Will Be Blood” is said to be loosely based on Doheny (AOGHS 2019). In 1897 the world’s first offshore well (Willon 2019) was drilled from a 300 ft long pier in the Pacific Ocean initiating an offshore drilling boom (Fig. 1C).

By 1910, California was producing over one fifth of the world’s total oil (oilindependents.org). California’s good relationship with the oil and gas business survived well in the 1960s. Four decorated, artificial platforms called “THUMS” islands (Fig. 1D) were built in 1967 off the coast of Long Beach from which more than 1,000 wells were drilled. THUMS was a consortium consisting of Texaco, Humble, Union Oil, Mobil, and Shell and the four islands were named in honor of NASA’s lost astronauts (Chaffee, Freeman, White, and Grissom) (AOGHS).

While oil and gas activity may have slackened in California in recent decades, its legacy remains. Camouflaged oil wells are found in various urban settings around the state, such as the Beverly Hills High School (Fig. 1E). 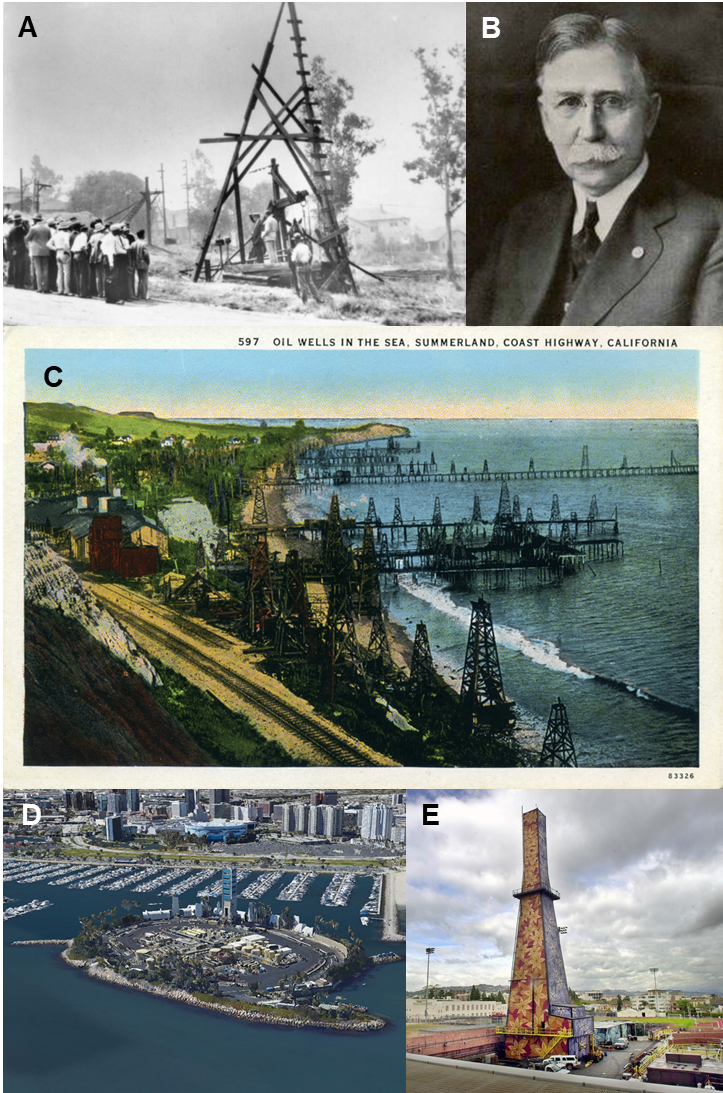 Despite early successes, the state’s relationship with the industry began to sour at the end of 1960s. The 1969 Santa Barbara oil spill—at the time the largest in history—placed a stain on the oil industry. Union Oil had obtained a waiver to case only a short section of its inclined A-21 well, leaving a long openhole section, exposing the surrounding rock to the fluid in the wellbore (Mullineaux, 1970). Pressure build-up during the post-blowout capping stage led to fractures initiating in the openhole section (Easton 1972 and Mullineaux 1970). Those fractures propagated to the seafloor, providing pathways for reservoir fluids to broach into the seawater (Fig. 2). Flowing at 5,000 B/D, this was a massive ecologic disaster killing over 3,500 birds and other marine animals (Easton 1972). In the wake of the Santa Barbara oil spill, a huge environmental movement was born, leading to the first “Earth Day” a year later. This incident changed California’s oil industry forever. 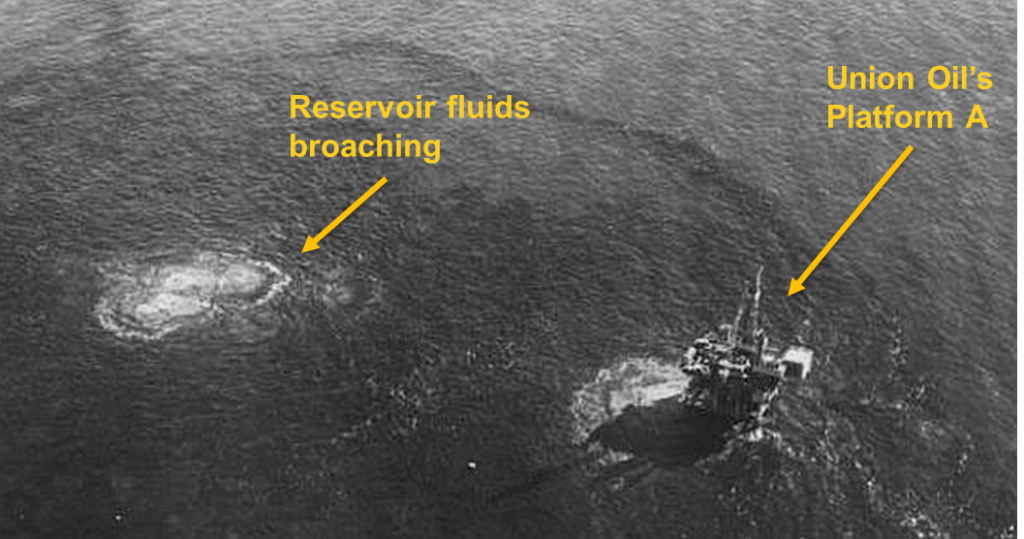 Fig. 2—Aerial photo of the platform after the blowout with the broached reservoir fluids visible (modified from source).

As the state’s existing fields have matured, California’s hydrocarbon production declined. Many of them discovered in the 1920s, they are currently under secondary or tertiary recovery (primarily using thermal EOR techniques). Moreover, following the Santa Barbara incident, a series of state legislatures made California arguably the most heavily regulated location in the world for petroleum exploration and production. Drilling of new offshore wells in the state waters has been banned since 1969 (oilindependents.org).

Nevertheless, until the end of the 2000s, California was set to surpass Texas in oil production, exhibiting a slower decline than the Lone Star State (Fig. 3). However, as the shale revolution unfolded, a stark contrast emerged between the states’ oil production and reserves (US EIA 2019). The shale boom helped Texas add millions of barrels to its daily production, while California’s oil production kept declining (US EIA 2019).

Most of the oil produced in California over the years originated in the Monterey/Santos Shale (Fig. 4) before migrating to more permeable layers, giving rise to some of the nation’s largest oil fields (Ershaghi 2011). In 2011, an INTEK study prepared by for the EIA estimated the Monterey/Santos Shale plays to hold almost 16 billion oil barrels; more than the Eagle Ford and Bakken formations combined!

Despite that, California is one of the only three major oil-producing states, with Louisiana and Alaska, which experienced production decline since 2010 (US EIA 2019).

The Future: Killing the Industry, or Using it to Revive the State’s Economy?

While many Californians want the state to pursue a zero-carbon target, through measures that include banning new natural gas hookups in San Francisco, they could be missing the bigger picture. Lacking a feasible storage capacity, the intermittent nature of alternative sources demand a reliable source to meet energy demands when the sun is not shining and the wind is not blowing (McLean 2019). With nuclear energy having fallen out of favor worldwide after the Fukushima incident in Japan, the remaining options are coal or natural gas. Hence, solar and wind cannot be expected to displace the need for natural gas in the state’s energy mix.

Furthermore, the refusal to develop local resources combined with the inability to transition away from petroleum-derived energy means California depends on 1 million B/D of imported foreign oil, a volume that has grown 5% per year in recent years. Even at today’s depressed prices, this translates to billions of dollars annually that are flowing out of the state’s economy, sometimes to the national oil companies of questionable governmental regimes (California Energy Commission 2018).

All the while, California is missing out on its vast amounts of easy oil and gas. Portions of the state’s extensive reserves from diatomite formations and shale remain untouched, as exploration and production companies are discouraged from developing them by the regulatory hurdles. Many reservoirs in California contain more sand than rock, which makes drilling through them easy and fast, and therefore cheap. Additionally, most fields (Fig. 5) are conventional with existing shallow wells, which would allow deeper wells to be drilled at a cost lower than some hydraulic fracture treatments in unconventional reservoirs elsewhere (Hein et al. 2013).

In addition to low drilling costs, the mainly chert-rich and dolostone-rich locations within the Monterey Formation exhibit a high natural fracture density (Ershaghi 2011). Those pre-existing fractures can be easily extended and connected by hydraulic fracture treatments facilitating the flow of hydrocarbons to the wells.

While there are some geologic hurdles to exploiting the Monterey/Santos Shale play (Fig. 4)— the formation exhibits heavy folding, which challenges horizontal drilling—the major obstacles are manmade (oilindependents.org). The regulatory framework constrains the development of potential prospects and the resistance to fracturing operations is extensive, with restrictive rules and localized bans (Green 2019).

Lastly, industry and academia are continuously studying loss of well control scenarios, where fracturing and subsequent fluid broaching to the seafloor is possible. The goal is to be able to predict and prevent events similar to the Santa Barbara oil spill from happening, with protocols set in place for appropriate response and damage containment to the absolute minimum (Michael and Gupta 2019, and Zaki et al. 2015).

With proper management, California would again be an attractive place for the petroleum industry and for petroleum engineers, who are often used to finding employment in less appealing places.

The following factors are in favor of it:

Michael, A., and Gupta, I. (2019). Geomechanics of Post-Blowout Fracture Initiation and Broaching During Loss of Control in Offshore Wells. European Association of Geoscientists & Engineers. 81st EAGE Annual Conference and Exhibition. doi:10.3997/2214-4609.201900943

Oilindependents.org. The Story of California Crude.