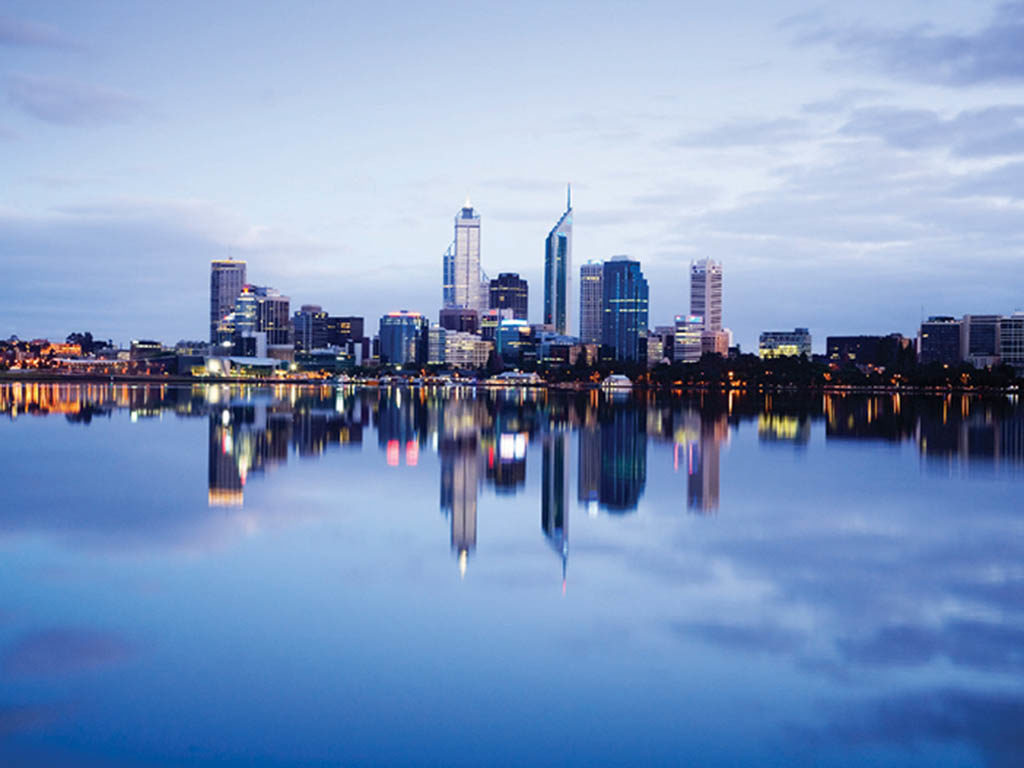 This guide is for those planning a relocation, business trip, attendance at an industry event, pleasure travel, or who are just curious about Perth and Western Australia, its history, and its role in today’s oil and gas industry.

Located on Australia’s southwestern coast, Perth is the continent’s sunniest city, with the highest annual number of sunshine hours. This warm and lovely business center is also the capital of Western Australia, the country’s largest and most capital-intensive state, whose vast energy resource potential has attracted investment from oil and gas operators, such as ExxonMobil, Shell, Chevron, ConocoPhillips, Japex, Total, BHP Billiton, and Apache.

Perth, which hugs the banks of the beautiful river Swan, is within an area long used to human habitation. The Nyungar aboriginal people of the Wadjuk tribe have occupied the Swan Valley for at least 40,000 years. They have a strong connection with the land and believe a Dreamtime serpent, the Wagyl, once traveled across the country, carving out the Swan Valley and the Swan River. They say the Wagyl still lives deep within the Swan River waters.

Although the Dutch, French, and British visited the area from the early 1600s onward, none were impressed with its potential. However, in 1828, Captain James Stirling arrived in England with such a glowing report of its agricultural possibilities that the British Colonial Office approved its declaration for Britain. The Swan River Colony’s official founding took place 12 August 1829.

Though the colony was founded as a “free settlement,” its initial settlers struggled to tame the land, eventually turning to the British, with an offer to accept convicts. Western Australia, therefore, became a penal colony in 1850. Between then and 1868, more than 9,000 convicts, many of whom undertook Perth’s most challenging obstacles to human development, were transported to Western Australia. In 1856, Britain’s Queen Victoria officially proclaimed Perth a city, and in 1901, Western Australia became part of the Australian nation.

Because Perth is situated on both sides of the Swan River, locals themselves divide the city into north and south. Its western edge comprises a beautiful coastline stretching more than 55 miles along the Indian Ocean. Watching the sun merge into the sea is a great way to mark the end of a superb Perth day. Its eastern edge abuts a low coastal escarpment known as the Darling Range. With a metropolitan area population of 1.7 million, Perth tied for eighth place on The Economist’s 2010 list of the world’s most livable cities.

Perth has slowly and steadily built a reputation in the oil and gas arena. While it is one of the most isolated metropolitan areas on Earth (Adelaide, South Australia, at 1,307 miles distance, is the nearest city with a population of more than 1 million), its relative closeness to both emerging and stable Asian markets represents a key strategic advantage. It has been part of and benefited from Western Australia’s phenomenal energy boom, with the state’s annual oil and condensate production accounting for more than 70%, and its gas (including liquefied natural gas [LNG]) production accounting for more than 60%, of the nation’s total 2009 production. This development has been accompanied by the ongoing creation of thousands of jobs in the construction, industrial, and oil and gas service sectors.

The fact that energy is crucial to Perth’s growth and that it is willing to learn from industry experience and expertise is evident from its inclusion among the 16 member cities in the World Energy Cities Partnership, whose stated purpose is to foster, through networking and collaboration, “the exchange of petroleum industry knowledge and economic and infrastructure development strategies…(that) help each city in its common task of supporting the local energy sector.”

Perth and the State of Western Australia

Approximately four times the area of Texas—offshore area almost four times the size of the North Sea—Western Australia contains Australia’s major hydrocarbon-producing province, the Carnarvon Basin. Other significant basins include the Perth, the Browse, the Bonaparte, and the Canning.

Perth is situated in the midst of the Perth basin, whose structural architecture is the product of oblique rifting during the Permian period, as well as the Late Triassic to Early Jurassic and Middle Jurassic to Early Cretaceous epochs, superimposed over pre-existing basement terrains. The basin contains mainly continental clastic rocks of Permian and younger age deposited in a developing rift system that culminated with the breakup of Gondwana in the Early Neocomian epoch.

The first exploration well in Western Australia was drilled in 1902, with the first discovery in the Carnarvon basin at Rough Range in 1953. Commercial oil and gas discoveries in Australia were not made until 1964, at Barrow Island (Carnarvon), and 1965, in Bass Strait (Barracouta, offshore state of Victoria). Overall, Australia’s oil production peaked in 2000 and has steadily declined since then. However, the country’s gas production continues to grow, which translates into great potential for LNG, which remains Western Australia’s third most valuable natural resource, accounting for approximately 8% of the world’s production market. According to the Australian Department of Resources, Energy, and Tourism, the country is the world’s fifth-largest LNG exporter with the potential, given the increasing gas demand in Asian markets, to be the second largest to Qatar by 2020.

This development is underscored by the Western Australia state government’s support and vision, with the commitment of AUD 80 million over a 5-year period toward an exploration incentive scheme designed to help develop the long-term sustainability of the natural resource industry. The region’s onshore oil and gas resource potential is largely unexplored, but continues to unfold as investment interest is generated and as the state’s infrastructure continues to be built.

To date, there are more than 60 oil and gas fields either developed or being developed within Western Australia. The state has more than 5,000 miles of offshore and onshore pipelines under license, as well as eight major ports, most of which export petroleum products.

Exploration for petroleum resources has never been an easy task and Western Australia has its share of challenges.

The first and a most significant is the remoteness of mineral deposits and petroleum fields from city centers, export facilities, and end-user markets. This means, for example, that a large number of LNG ships will be required to make exporting economic—in other words, to maintain export capacity. In addition, because LNG warms during shipment, some has to be released into the atmosphere during the journey to avoid over-pressuring the ships’ insulated tanks. Thus, for shipments to a possible market such as the US, losses of approximately 4 to 6% can be expected.

Another challenge development programs face is considering their environmental impact. Environmental performance is at the top of companies’ scorecards and closely monitored by all levels of government. The Gorgon development, for example, is required to implement geosequestration as a means of reducing the project’s carbon emissions. This would make the Gorgon Project one of the first worldwide to embark upon a commercial geosequestration project.

Finally, the region’s oil- and gas-sector expansion has resulted in major labor shortages due to increasing investment from petroleum majors and requirement for infrastructure building. Demand outweighs supply for jobs in all sectors related to oil and gas exploitation and infrastructure building, including housing, education, food service, engineering, and so on. This trend alone makes Perth an excellent option for those considering an international career in the oil and gas business.

Not only is Perth an attractive destination for oil and companies, it also boasts fine dining at cafes and restaurants with cuisines from around the world, lovely weather tourists flock there to enjoy, surfing, and beaches with white sands and sparkling clear warm waters. A popular destination is Kings Park, with its perfectly manicured lawns and stunning bird’s-eye view of the city and the Swan River.

For fun and relaxation after a good day’s work, however, you can’t beat visiting one of Perth’s many fine wineries for an ice-cold glass of local white wine. The combination of great food and wine, sandy beaches, and good weather makes Perth an enticing place for all newcomers.

The authors would like to thank Claire Dean, senior production technologist, Shell India, for her help with this article.