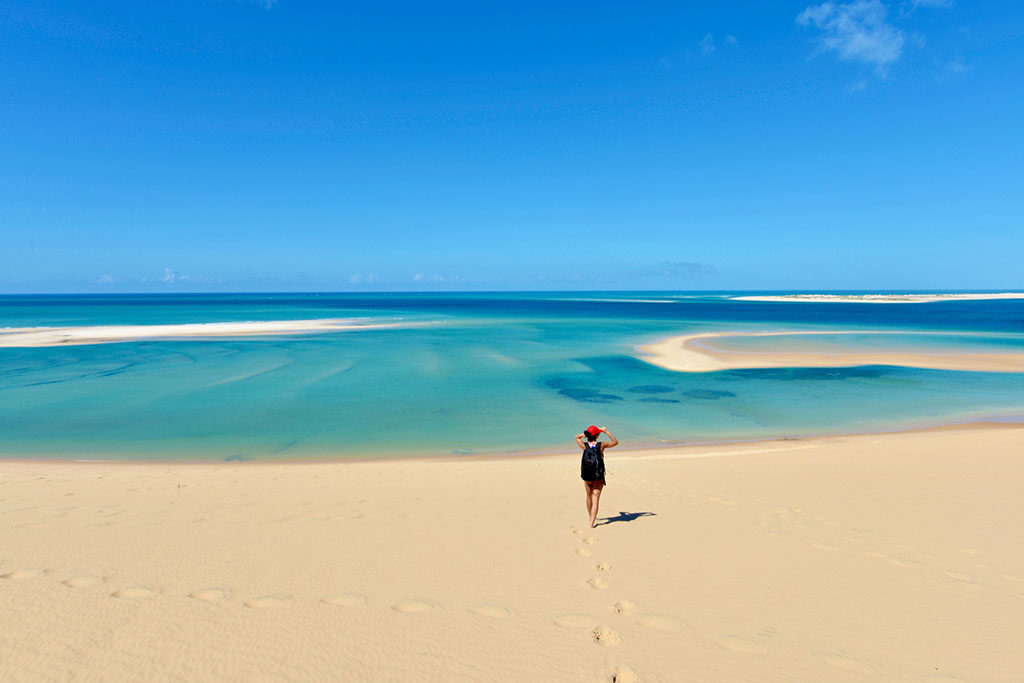 Mozambique is located in southeast Africa with an extensive area of 306,642 sq miles (approximately 800,000 sq km). The major cities include the capital city of Maputo, Beira, Matola, Nampula, Quelimane, Tete, Nacala, and Pemba. The terrain varies from lowlands to high plateau with a climate range from tropical to subtropical.

Mozambique has an enormous energy potential, which provides the country with favourable means to fulfil its domestic and regional energy needs for southern Africa and beyond. The latest discoveries of natural gas, estimated at 277 trillion m3, puts Mozambique in a very privileged position both in the region and in the world. Its vast potential in the field of renewable energy, particularly biomass, solar, and wind energy, also adds to the country’s potential as a global reference in the energy sector.

The abundance of resources and privileged geographic location of Mozambique favors the establishment of various industries of regional and global scale. This creates unique opportunities that can accelerate the country’s development.

Despite this reality, Mozambique is still one of the least industrialized countries in the world, a scenario that can be overturned with the sustainable use of these resources. Just for reference, it can be mentioned that the total primary energy consumption in 2011 was 8 million tons of oil equivalent, which puts the country below the average consumption in the world and in Africa. Furthermore, 78% of the primary energy supplied comes from biofuels such as wood, hay, manure, and food waste. With the exception of the big cities, biofuels are still widely used, both for commercial and household purposes, especially in rural areas. Taking into consideration the vast potential, energy resources can contribute to the country’s socioeconomic development sustainably. 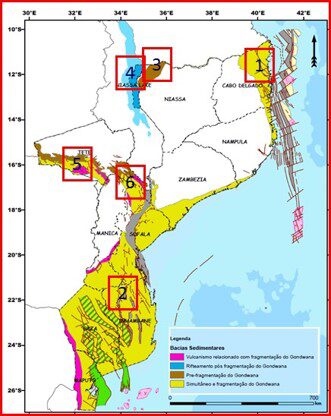 The systematic research of hydrocarbons in the Mozambique began in the mid-50s of the last century, with a total of 227 wells drilled to date (178 exploration and 49 production wells), with satisfactory results that led to the discoveries of the Pande, Temane, and Búzi fields in the Mozambique Basin in the beginning of the 1960s.

Wells and seismic data acquired in Mozambique. Source and Source.

The production of natural gas began in 2004, starting from the Temane field at a rate of 145 MMscf/D and in 2009 from the Pande field, with a current total production rate of around 470 MMScf/D from both fields. The gas produced from these fields is processed at the Temane Central Processing Facility and then exported to South Africa through an 865-km gas pipeline with a diameter of 26” from Inhambane in Mozambique. The gas produced is fairly wet having some condensate associated and produced at 1300 B/D which is also exported. In addition to that the country consumes 20% of the total production in the generation of electricity, industrial plants, compressed natural gas (CNG) for vehicles, and households.

Discoveries in the Rovuma Basin

After intense and long-standing research work, surveying seismic data, countless drilling of research wells, marked by advances and setbacks over a long and epic journey, the Rovuma Basin has revealed a very high hydrocarbon potential.

In 2010, as a result of the first of several programmed wells, within the scope of the second public tender for the concession of areas for research and production of hydrocarbons, Anadarko Mozambique Area 1 (then operator of Area 1 offshore of Rovuma Basin) announced the discovery of natural gas from the Windjammer field.

This discovery, through the Windjammer 2 borehole, was the first of many made in Areas 1 and 4 of the Rovuma Basin and later considered to be the largest discoveries of natural gas in the last 20 years. It made it possible to prove a total of 170 TCF of natural gas reserves in situ in the reference areas. 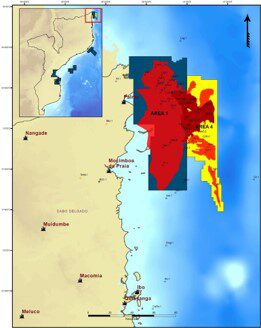 The scientific, economic, and historical dimension of this event placed Mozambique on the route of opportunities and development of an oil industry for the benefit of the society.

To monetize this large gas reserves, the government approved the implementation of three major projects for the production of liquefied natural gas (LNG), namely, Coral Sul FLNG (a floating LNG) offshore, and Golfinho /Atum and Rovuma LNG plants—both onshore, with investments in the order of $50 billion and revenues for the Mozambican state above $90 billion.

The Coral South FLNG is the first of its kind in Africa and the fourth in the world, which is being built in South Korea. It is expected to be in production in the mid-2022.

These investments will enable the creation of more than 10,000 jobs and countless opportunities for small- and medium-sized companies in the supply of goods and services across the value chain (such as electricity generation and fertilizer, methanol, and liquid fuels production), which will contribute to transforming the country, placing Mozambique as one of the largest producers of natural gas in the world and one of the largest suppliers of LNG. 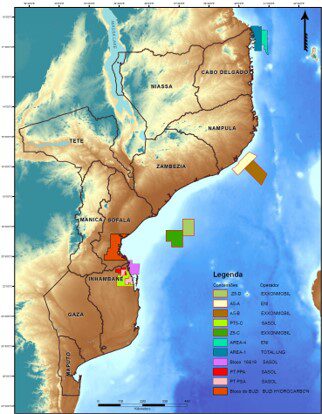 Mozambique is a vast country, with a lot of variations in cultures. It is good to visit the whole country, but to shorten the list, here are some places most visited by tourists along the years:

Maputo. Capital city since 1898, Maputo is usually the gateway of those who start a trip through Mozambique, since it is a good place to know more about Mozambican culture. Many markets, bustling nightlife, and one of the best places to experience local cuisine: don't get out of there without tasting peri-peri, a sauce made with pepper of the same name, which serves as the basis for different dishes such as chicken and shrimp. As most tourists are really keen to know the beaches of Mozambique, the stay in the capital is usually very short.

Tofo. Tofo Beach, or simply Tofo, is a small town in southeastern Mozambique. The town lies on the Indian Ocean coast, on Ponta da Barra peninsula in Inhambane Province, Jangamo District, 22 km drive from Inhambane city. A major Mozambican tourist destination, Tofo has become a very popular spot among young people. It has a relaxed atmosphere and inviting beaches for those who enjoy surfing and kitesurfing with tourists drawn by a long Indian Ocean beach front and nearby reefs. Along with manta rays and sea turtles, Tofo is one of the best destinations for divers to see whale sharks.

Vilanculos. Vilanculos is a very pleasant place and a popular destination for those who want to explore the Bazaruto archipelago and the best of the beaches in Mozambique. Riding horses along the beach, snorkelling, and diving on the nearby islands are popular activities. Vilanculos' main area can be explored on foot, and you will find good restaurants and bars, a central market, some shops, and accommodation options.

Bazaruto Island. The 37-km long Bazaruto Island is the largest in the archipelago of the same name, considered the largest marine reserve in Africa. Famous destination for diving lovers, it has a pristine nature where the water is crystal clear and marine life is abundant, with turtles, manta rays, humpback whales, whale sharks, and corals being easily sighted.

Gorongosa National Park. Gorongosa, in the heart of central Mozambique was gazetted as a National Park by the Portuguese government in 1960. This ecologically unique park encompasses almost 4,000 sq km and is located at the southernmost end of the Great African Rift Valley. The park used to be host to one of the greatest populations of wildlife in all of Africa, but due to hungry soldiers and poaching, the population of some of the species fell by almost 95%.

It still boasts a great diversity of plants and animal species, some of which are unique to the area, and together with an impressive co-management plan with the Carr Foundation to re-establish dwindled population numbers of various species, the park is a real success story in terms of rehabilitation and conservation.  Species include impala, waterbuck, elephant, warthog, hippos, kudu, lion, zebra, buffalo, wildebeest, crocodile, and more recently, leopard, as well as more than 400 species of bird. The park suffered heavy devastation during the years of civil war and uncontrolled hunting. However, it went through a rehabilitation program, which was very successful and brought back the beauty of the place.

Island of Mozambique. Ilha de Mozambique is a unique and increasingly popular destination in Mozambique and a proclaimed UNESCO World Heritage Site.  The island served as an Arab port before Vasco da Gama visited it in 1498 and later the Portuguese established a port with naval base here. The chapel of Nossa Senhora de Baluarte built in 1522 is considered to be the oldest non-indigenous building in the southern hemisphere.  The island was Mozambique's first capital.

The island has a fascinating mix of African, Arabic, and European cultures and history is displayed in churches and mosques, beautiful colonial buildings with thick walls and small traditional houses, the imposing fort, the old Portuguese houses (some dating back to the sixteenth century), the well-maintained, interesting museums, and above all in the local population, their culture, and their incredibly varied faces.  There is a colourful and vibrant feel to the island with all the hustle and bustle; yet you can still feel the charm, sophistication, and culture.

Quirimbas Islands. A beautiful string of 32 islands lying far north of Maputo, the Quirimbas Archipelago (or Ilhas Quirimbas in Portuguese) stretches more than 100 km along the coastline. The beaches and waters are still largely unpopulated and so ecologically pristine. The 11 southernmost islands are protected under the Quirimbas Marine National Park.

Niassa Reserve. Located in the far north of Mozambique, the Niassa (Nyasa) Reserve is home to large populations of game animals, in particular huge herds of elephants and plenty of big cats. The reserve also boasts a population of African wild dog of over 350, significant for an endangered mammal. The reserve is around 42,000 sq km and is Mozambique's largest protected area. Its northern border is the Rovuma River, the border with Tanzania, and the southern/eastern border is the Lugenda River.

The reserve is one of the largest miombo woodland preserves in the world, with miombo forest covering half of the reserve. The remainder is mostly open savannah, with some wetlands and isolated patches of forest. Also home to the Mecula Mountain at the centre of the park and majestic inselbergs as far as the eye can see.  It is a long drive from Pemba, and a difficult road in the dry months between April to December; in the rainy season, access is impossible.

Célia Gomes Correia started as a chemical engineer at the National Petroleum Institute (INP) of Mozambique in 2006 focusing mainly on production data and related technical issues. She holds a master’s degree in petroleum engineering from the Norwegian Science and Technology University.  She has extensive experience in the evaluation of field development plans for gas field developments. In 2015, she was appointed as the projects and development director at the Projects and Development Division at INP, where she has been involved in all the projects related to the development of the world class gas discoveries in the Rovuma and Mozambican basins. She has been involved in the FLNG project implementation and in the onshore LNG development in the Rovuma Basin, as well as the process of evaluation of the unitization and unit operating agreement for Prosperidade/Mamba fields. She has been an active member of SPE since 2009 and currently is the chairperson of the SPE Maputo Section. She loves traveling, reading, and outdoor sports.

[The article was sourced from the author by TWA editor Radmila Mandzhieva.]