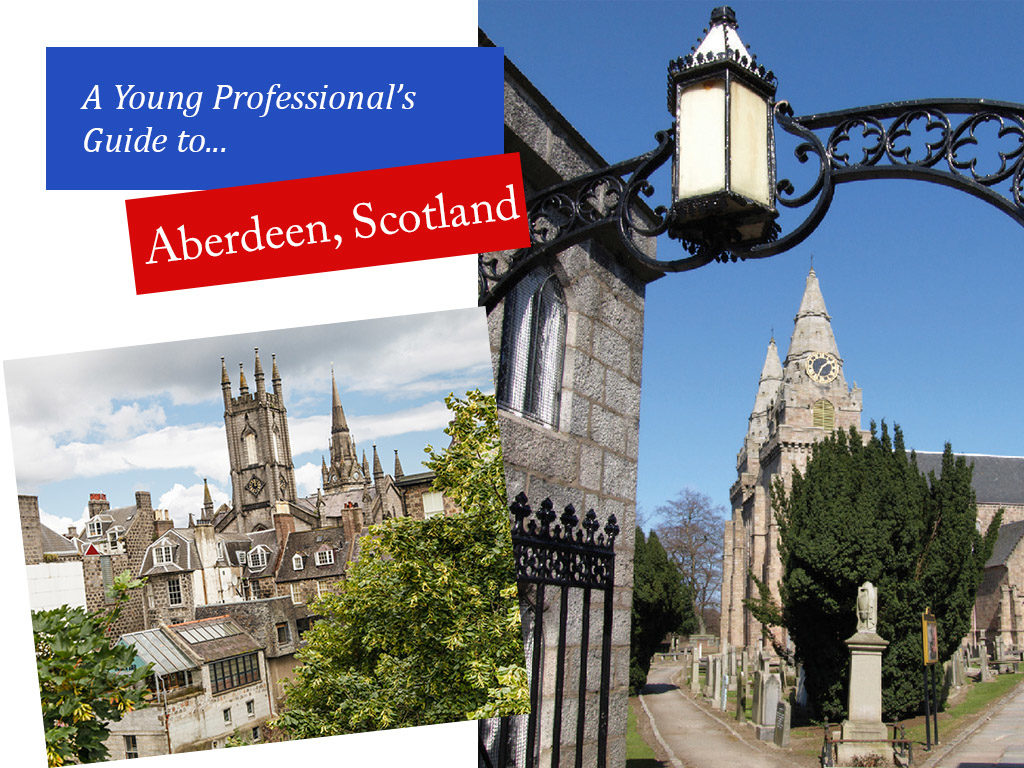 “Fit like!” Thankfully, Aberdonians are so courteous that they will quickly recognize that you are from out of town and will greet you with the more common: “How are you doing?” However, when you explore the city, be prepared to listen to a combination of Scottish slang and Doric dialect, typical of the northeast of Scotland. It will make you think that your English is a rare and forgotten language. Nonetheless, Aberdeen has not escaped from the globalization phenomenon and praises itself for being a multicultural and cosmopolitan city, where English is spoken with a wide variety of accents from all possible backgrounds. Here, people with diverse languages, origins, and religions, but with a common passion for excellence and good work, will quickly integrate you into the community and make you feel at home.

Aberdeen owes to the North Sea its relevance in today’s oil industry. A great quantity of oil and gas reserves have been extracted and still lie underneath the sea that separates the United Kingdom (UK) from northern Europe. The North Sea UK sector is mainly serviced from the ship port in Aberdeen, from where most of the offshore rigs and platforms receive their supplies and support.

The history of commercial extraction of oil from the North Sea coasts dates back to the mid-19th century; however, the activity, in such large scale as we know it today, started during the 1970s. Since those days, the North Sea has earned the reputation of being one of the regions where hydrocarbon production activities are most demanding; not only because of the harshness of its offshore environment, but due to the complexity of its subsurface characteristics.

The North Sea has also built a reputation of being the place where the most advanced technology, standards, and knowledge are applied and developed. This reality permeates across the globe, where work experience in the North Sea often provides the same reputation as obtaining a degree from a top-ranked university.

The UK sector is commonly divided into the northern, central, and southern North Sea. The southern area is characterized as mainly a gas-producing area. Below the North Sea lies a complex of older basins and grabens. In the southern and central North Sea, the Permian basins and the deep central graben make up the thickest sediments. The northern North Sea is dominated by the Viking graben. Mount Everest would just about fit into it upside down. The Earth’s crust is thinned symmetrically across the entire width of the northern North Sea. Two further important influences on the structure in the central and southern North Sea are deformation produced by mobile salt masses and inversion of basins accompanied by erosion.

The North Sea’s diversity is reflected in the variety of more than 200 fields that have been developed through the years. The most famous ones, with oil- and gas-bearing sandstones, are Brent, Forties, Piper, and Buzzard. Leman in the southern North Sea is the largest gas field. The list is extensive and diverse, for example, limestone and chalk gas condensates (Ardmore and Joanne), tight sandstone oil (Bruce), and heavy oil (Captain).

The complexity of well construction and offshore operations have meant overcoming the increasing technical challenges presented by each of the new developments, from intelligent completions, high-pressure/high-temperature challenges, extended-reach and complex-architecture wells to record-breaking subsea installations, remote monitoring, and a complex network of pipelines that have to operate reliably in all kinds of weather.

The North Sea has had a relatively short life of less than 40 years. However, the prolific oil production has been there since the first day. Fig. 1 shows how, in a period of 10 years, the oil production increased from zero to its plateau of more than 2.5 million BOPD. However, since 2000 production has experienced a steady decline, which, despite the effort, has not stopped.

The technical and economical challenges involved in the initial development of the North Sea meant that only the major oil companies and service providers were up to the task. Therefore, large headquarters for BP, Chevron, Shell, Halliburton, Schlumberger, and Weatherford, to name a few, have been established in Aberdeen.

In recent years, the combination of production decline, technology commoditization, and regulatory incentives has opened the oil business in the UK North Sea to new players, ranging from small, one asset companies to the large independents. In the service sector, the trend has been similar. Aberdeen is home to a wide range of niche and entrepreneurial companies. They have grown by developing technology and solutions to tackle specific North Sea challenges, which are commonly being exported worldwide. In summary, today’s oil business in Aberdeen is made up of a diversity of companies, where big oil is just another player.

Despite the great success of the oil industry in Aberdeen, there have been some upsets during the journey. The worst one was the Piper Alpha disaster in 1988. The oil production platform was destroyed by a series of explosions and fires, killing 167 men, with only 59 survivors. After 20 years, this accident is still a major landmark in the minds of the people in Aberdeen. The main consequence of this disaster was a revision of standards that led to more stringent safety regulations.

The two major regulatory bodies in the UK oil industry are the Health and Safety Executive, which controls the risks to health and safety arising from offshore activities, and the newly created Department of Energy and Climate Control, which recently took over the oil business regulation from the Department for Business, Enterprise, and Regulatory Reform.

The UK North Sea oil infrastructure is aging fast and within a few years an increasing number of installations will require decommissioning, because they will be no longer economical. The industry must develop the technology and knowledge required to remove and dispose this infrastructure in the safest and most environmentally friendly manner. This remains as one of the main challenges lying ahead.

Nevertheless, even if the oil industry contracts here, Aberdeen will still have much to offer to the energy world. Its future relies in the creative minds of the engineers, scientists, and entrepreneurs that are already transforming the city into a hub for energy technology development. Aberdeen is aware that the oil booming years will be over someday and now is the time for the city to reinvent itself and keep the legend alive.

Aberdeen is known as the Oil Capital of Europe. It is just a three-hour drive or train trip from Scotland’s largest cities: Edinburgh and Glasgow. You can also fly to Aberdeen in less than two hours from several European cities, including major connection hubs such as Amsterdam, London, and Paris.

Also known as the Granite City, because most of the buildings are built with this rock, Aberdeen grew between the rivers Dee and Don. However, nowadays the city extends beyond these rivers and is integrated with a series of satellite towns. The Dee River leads to the busy harbor and into the North Sea coasts where a beautiful beach esplanade is used for recreation and even water sports during the summer.

Most visitors believe that the main sport recreations in Aberdeen are golf and football. With a Scottish Premier League football team and a flurry of golf courses in and around the city (including mythical St. Andrew’s, just 2 hours away), this appears to be right. However, pub crawling along Union Street has by far more supporters during the busy weekend nights.  Entertainment is well compacted within the city center, where everything is just a walk away. Along Union Street and its surroundings you find His Majesty’s Theater, the Music Hall, the Maritime Museum with a great display on the North Sea oil industry, a wide variety of great restaurants, shopping centers, and pubs.

From Aberdeen you can also travel quite easily to the whisky-making countryside. Follow one of the castle and/or whisky trails and learn how the determination of the Scottish people always gave a good fight and created the best liquor of all.

There is enough said and written on Aberdeen’s weather. So, if you want an objective point of view, find a job, grab your stuff, and experience the great quality of life that Aberdeen has to offer... along with its sun-less summer and wet winter.