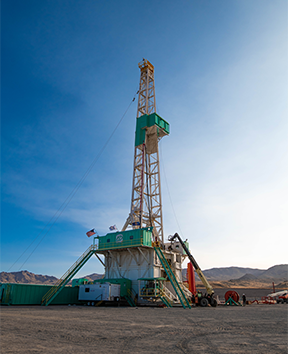 Highly deviated wells are frequently drilled for oil and gas production, but not by the geothermal industry. In a geothermal first, the Utah Frontier Observatory for Research in Geothermal Energy (FORGE), announced that it has begun drilling a deviated geothermal well in hot, hard crystalline granite.

Funded by the US Department of Energy, the Utah FORGE project is managed by the Energy & Geoscience Institute at the University of Utah. It is located near the town of Milford in Beaver County, Utah, on the western flank of the Mineral Mountains. Near-term goals of the project are aimed at perfecting drilling, stimulation, injection-production, and subsurface imaging technologies required to establish and sustain continuous fluid flow and energy transfer from an enhanced geothermal systems (EGS) reservoir.

“This is an exciting phase in the Utah FORGE project and is key to proving EGS technologies are commercially viable,” said Joseph Moore, principal investigator of Utah FORGE.

Once the well is completed, a series of tests will be run to facilitate the development of the EGS resource. Some of the tests will include determining the stress conditions through short-term injection experiments, during which microseismicity will be carefully monitored. Other tests will allow for the interpretation of the orientation and distribution of the existing and induced fractures in the granite, which will form the pathways for water to circulate and heat up in the newly created EGS reservoir.

The results of these tests and other research and development activities will be used to plan the second deviated well, which is tentatively scheduled for early 2022.