Good Living Between a Rock and a Hard Place 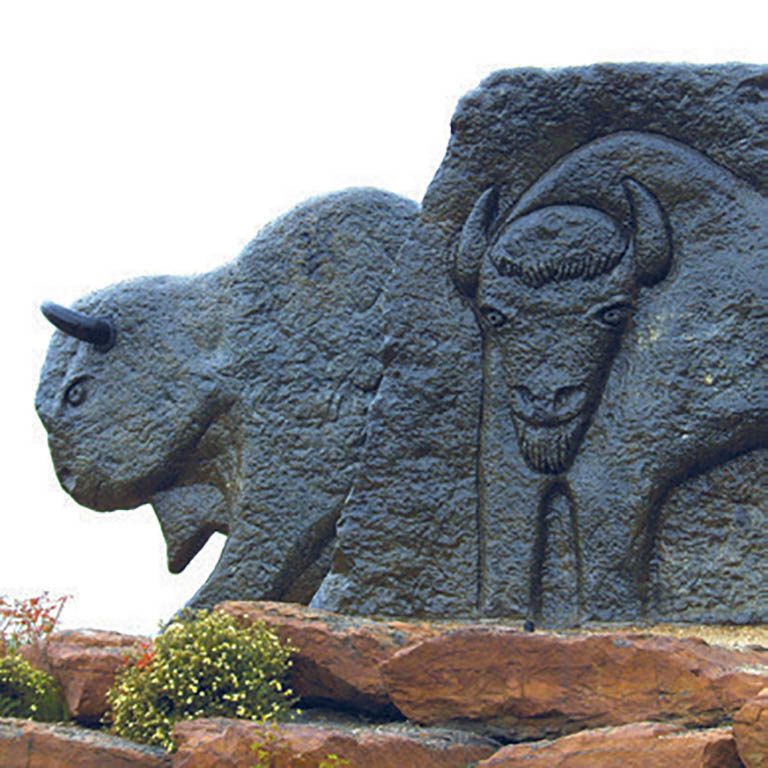 Bison oil-sand sculpture in Fort McMurray, created by a local artist, along the highway leading to oil-sands production and upgrading plants in northern Alberta.

The nature of the oil and gas industry is truly global and diverse. Young E&P professionals (YEPPs) from any nationality, gender, and background will have many challenges and opportunities ahead of them. Approaching these challenges requires us to uphold high ethical standards, which will provide the integrity to excel in our jobs. In this YEPP PerSPEctive, we have two views from fellow TWA readers on our industry. Rafi Khouri shares with us his experiences traveling the world as he moves from assignment to assignment. Although he found his work environment tough at times, he realizes that there are opportunities for professional and personal growth in those conditions.—Léon Beugelsdijk, YEPP PerSPEctive Editor

Reading the first issue of The Way Ahead earlier this year, while parked next to the Fort McMurray oil-sand bison sculpture in Canada, it hit me. Our industry is just that: Good living between a rock and a hard place. As you read along, I hope that I’ll be able to convey the great experiences of a young exploration and production professional, as well as the great potential offered to us by the oil industry.

After finishing my BSc degree in 1997, I was offered a field service engineering position with a service company in Abu Dhabi (United Arab Emirates) in an industry I knew nothing about. Eight years and four continents later, I sure am glad I embarked on this adventure.

As the plane landed at Abu Dhabi Intl. Airport, I could not help but wonder: “I am here because?” Every day since has provided answers. Some have been great and others have made me reflect, but each day has definitely been a wealth of experience. What have I learned? There is no absolute right answer, but rather a right answer for each circumstance.

Two weeks later, a helicopter ride, standard mode of transportation, got me to the platform I was headed to. Hundreds of helicopter rides and Vietnam stories by the chopper pilots later, I am now able to understand how everyone can sleep on these rides (yes, I did not manage any helicopter sleep for a whole year). After a while you just adapt to the situation. A perfect example is adjusting to the summer heat of the region (45°C is common during the day). In August, we would work from 3 to 11 a.m., running corrosion tests in the desert, then sit by the pool at a five-star camp when it got too hot to work outside. Best 9-to-5 job you could ever ask for.

This “new” life was not all work, though. Weekend water skiing or scuba diving in the Persian Gulf, or even taking 4×4 trips into the desert, became the norm after spending a week at a remote facility dealing with sour gas. My career progressed from there, and I found myself responsible for technical support services as well as sales growth for parts of Abu Dhabi and Yemen, and I made the occasional foray into Qatar, Egypt, England, and Italy on special projects.

My assignment in Yemen was definitely interesting. Shortages in technical manpower following the 1980s and 1990s exodus from the industry led to me being the person having to re-establish an agency agreement with our distributor in a country that recently had undergone a civil war. This is not something a 24-year-old has much experience doing. Initially, I thought that getting to Yemen (first class on Emirates Airlines) was the best part of the trip. Little did I know that Yemen would be an intensive training course in both the technical as well as the business front.

Re-establishing the agency agreement helped me understand legal issues regarding trade embargoes and boycotts, the intricacies of customs in different parts of the world, and payment and shipment jargon, as well as the benefits of speaking the local language when negotiating commission terms.

Yemen also proved to be a great technical learning locale. Having to provide technical support services to remote production facilities was the perfect motivation to learn more about corrosion-inhibition theory and applications, phase-separation issues, oilfield scale formation and prevention, and paraffin deposition and mitigation.

Another interesting aspect was the health, safety, and environment (HSE) policies applied by various western producers. With longer production histories, western oil companies had achieved more-detailed HSE policies for E&P than the Yemeni government. Although western producers had the option of following the local HSE policies, they all applied the same high ethical and moral standards as their operations in the west.

In 2001, while on a training course in Houston, I casually informed one of our regional managers that I spoke French. Next thing I know I was off to Angola as the chemical engineer—chef de labo et de traitement—for Total’s first deepwater floating production, storage, and offloading (FPSO) vessel, Girasol. My major apprehension of not knowing anyone there disappeared as I got to the FPSO vessel and found out that I already knew my manager from a project in Qatar with Total. It definitely is a small world, filled with people willing to help and share experiences.

This rotational assignment allowed me to experience both the commissioning and startup of (at the time) the world’s deepest seabed FPSO operation as well as life in southern Africa. On a professional level, I was exposed to material-selection criteria for seawaterflood equipment, Natl. Aerospace Standards filtration requirements for subsurface-controlled-safety-valve hydraulic fluid, and wellhead chemicals injected through umbilical lines.

You know what? We have it real good in the oil industry. Yes, I was sharing a 6×15-ft cabin with another engineer. Yes, I was on a platform in the middle of the ocean. Yes, I had no access to the rest of the world for a month at a time. But here I was, doing something I am passionate about, in a promising industry for young professionals, exploring fabulous parts of the world, living out at sea, watching whales on a daily basis, and was lucky enough to experience more in a month than some people do in a year. Most of my coworkers had 20 to 30 years’ experience, and were of great help in getting my feet wet (including dunking me in the FPSO vessel’s small swimming pool).

Angola was yet another example of the conscientious corporate behavior of oil companies in foreign lands. All the foreign operating companies I was exposed to had some form of Angolanization program, where they would encourage the training of local engineers by the expatriates, transferring operational knowledge to this new generation of young E&P professionals with the long-term goal of eliminating the need for expatriates in Angola’s oil industry.

During my months off, I managed to live in Luanda (Angola), with a few trips to different parts of southern Africa. I was once again reminded of how lucky we are. For most people in Angola, electricity is a luxury, and clean water is hard to get, yet they have some of the smartest young engineers I’ve had the chance to work with, wanting nothing more than a chance to show what they can do.

Although a year in Angola was worth 10 in a “regular job,” I had my mind set on new horizons. In this case, it was the oil-sands mining industry in Canada as well as in-situ heavy-oil production. Mining for oil? Yes. More than half a million barrels a day are currently mined from Alberta’s oil sands using huge (more than 400 tons) trucks and shovels. Once again, I was given the chance to learn something new. Although over 40 years old, this industry continues to be cutting edge, with young engineers working at developing and applying the latest technological advancements to ensure the growth of the Canadian heavy-oil and oil- sands industry. Here again, a gorgeous background to the workplace—the Canadian Rockies—makes for a fun living.

In Canada, I got to witness firsthand the origins of the great HSE standards I had seen in Yemen, the basis of knowledge transfer to the next generation at its best with oil companies actively participating in university funding, a truly diverse workforce, and corporations that are structured to treat every employee fairly. Canadian oil companies definitely follow some of the highest standards of corporate governance in the industry, making it a great place to work and live.

So jump on. It won’t always be easy, but we promise loads of challenges and fun along the way.

Rafi Khouri joined Champion Technologies in 2002 and is currently the company’s Oil Sands/Heavy Oil Segment Leader (Alaska-Canada Business Unit), focusing on Champion’s growth in the Canadian oil sands production chemicals industry. He began his career in 1997 as a service engineer with Emochem in the United Arab Emirates. In 2001, he went to TotalFinaElf Angola for a 1-year rotational assignment as a chemical engineer working on the deepwater vessel Girasol.