The US Fracturing Market Is Sinking, But How Low Will It Go? 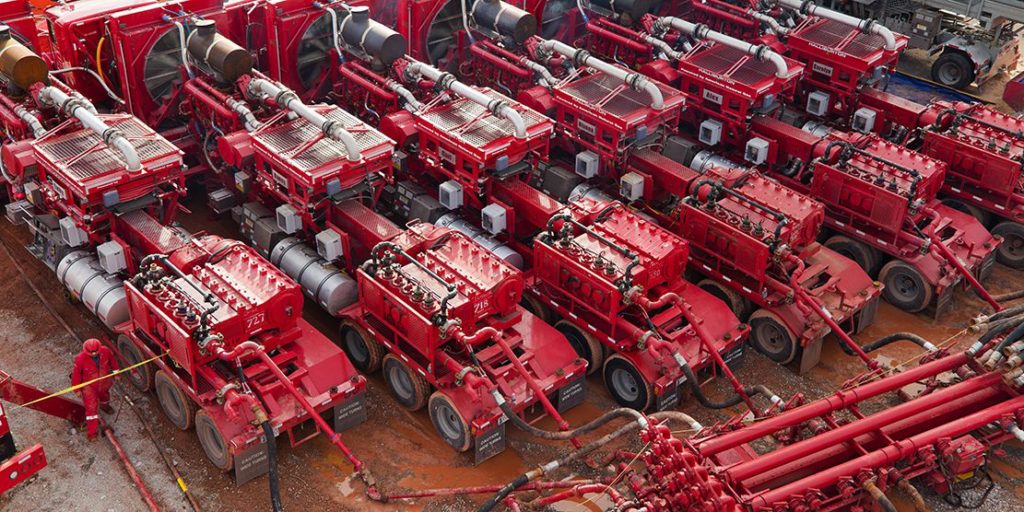 With oil prices hovering in the mid-$20s for more than a week, and facing the threat that they may be driven lower by an expanding surplus, US shale producers have begun moving heavy capital out of the field. When they are done, the shale business might be about half its current size in terms of activity.

More than two dozen of the largest US shale producers have already announced 20%–30% cuts to their capital budgets. Apache Corporation and QEP Resources are among the first to take the drastic step of halting all drilling and completions activity.

Some large Permian producers, including Pioneer Resources and Parsley Energy, plan to lay down at least half their rig fleets in the coming weeks. Executives at both firms said they will take pay cuts to cope with the sudden downturn.

Several other tight-oil operators have also announced pay cuts, smaller dividend payouts to investors, along with furloughs and layoffs. Chevron, ConocoPhillips, and EOG Resources have each said the cuts will result in annual production declines from their tight-oil fields in Texas.

As the double crisis of a price war and global pandemic play out, one looming unknown is how much more the struggling shale patch must pull back on hydraulic fracturing activity to bring costs under control.

Primary Vision reported that as of Wednesday, 25 March, its model suggested that the number of active fracturing crews in the Permian Basin stood at about 115. The market research firm in Houston pegs the total US figure at 276—representing an 8% drop compared with last year’s average of 300 active spreads.

“We’re estimating a sharp decline to 250 in the near term,” said Matt Johnson, president and chief executive officer of Primary Vision. He explained that there are three big technical questions that must be answered to gauge the speed of the shale sector’s contraction.

Primary Vision said it expects that as rising imports from the Middle East arrive into US refineries, more of the US tight-oil supply will be displaced into aboveground tanks. The firm said the excess will further push US producers to “store it in the ground” by not completing planned wells.

Equinor said it will do just that on Wednesday. The company is halting all drilling and completion activities in North Dakota and Texas "to produce the volumes at a later period" and slash its total investment in US onshore for the year.

“There are a lot of these ‘new normal’ things that are hard to forecast at the current time. We’re following completions closely and will adjust from week to week if needed,” added Johnson.

Preceding the market collapse, both Schlumberger and Halliburton were already making a strategic retreat from the entire North American shale sector. The tightening of lending and slowing efficiency gains meant the shale patch was already "facing its biggest test since the 2015 downturn" said Jeff Miller, the chief executive officer of Halliburton just 2 months ago.

The fast-paced nature of recent price drops has meant that everyone in the business is tossing out annual models made 2 or 3 months ago and rerunning new ones. And then re-running those.

Tulsa-based Spears & Associates issued a bleak outlook for the US fracturing market on a Tuesday only to reissue a new outlook 2 days later that lowered the US frac market outlook by an additional $3 billion in 2020.

The firm said in a recent note that it was struck by the fact that only a year ago Halliburton’s fracturing sales brought in $2 billion. “Today the global frac market is smaller than that,” the note read, adding that US fracturing activity is set to shrink by 50% just as soon as many in-progress well pads are finished up. 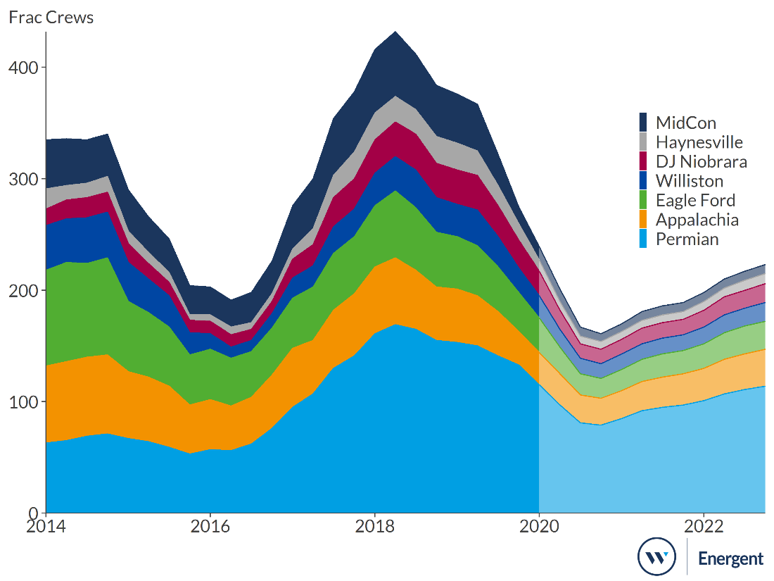 No Relief in Sight

One move meant to help soften the fall of the US shale industry also appears to be on hold, according to an S&P Global Platts report. Upon the outset of the crude rout, US President Donald Trump announced that his administration would begin filling up the nation’s Strategic Petroleum Reserve (SPR) in Texas and Louisiana with up to 78 million bbl of US-produced oil.

However, almost 2 weeks after issuing the order, US legislators declined to include the administration’s request for $3-billion of purchases in its latest stimulus package approved on Wednesday, 25 March. Government data also show there has been virtually no change to the SPR inventory levels this month.

With no relief in sight, Westwood Global Energy Group is among those trying to gauge how many fracturing crews operators are preparing to release over the next few weeks. The firm expects the effects of the unfolding downcycle to be most profound in the Permian, which has in recent years become the most active basin in the world.

Used by many as a leading indictor for tracking US fracturing activity, the drilling outlook is looking similarly bleak. According to Westwood, there may be a 55% drop from 705 rigs last quarter to just 312 rigs by the end of this year.

The drops will accelerate in the coming weeks from just 9% this quarter to 35% in the second quarter. “The Permian basin by far will feel the biggest impact as it makes up nearly 60% of the total land rig demand,” said Jang, adding that at least 20 publicly traded producers have reduced rig plans so far.

Outside of fracturing equipment, other areas of the shale sector are bracing for a pullback. Westwood estimates that frac sand demand will decline by about 36% from 2019 levels, and only if oil prices can average around $30/ bbl for the rest of the year.

Other data shared by Primary Vision showed that in the Permian, proppant usage is already dropping to below 2014 levels. 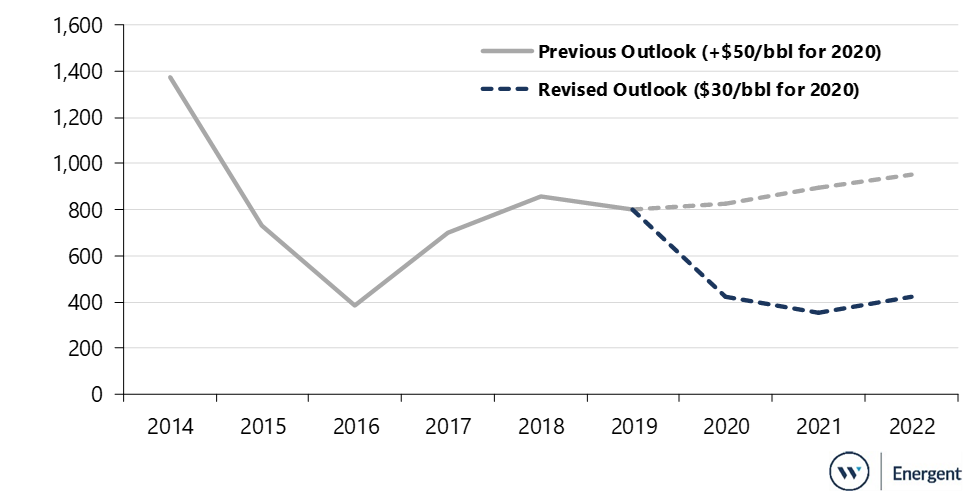 Despite the rapid reductions to capital programs, some consider them insufficient to help mitigate the ongoing demand destruction.

Uday Turaga, the chief executive officer of oil and gas consultancy ADI Analytics, offered two reasons. The first is that many shale players have hedged large volumes of oil sales in the $50-range through 2020. The other is that shale producers remain too optimistic on the chances of a price recovery coming by year’s end.

“We don’t see prices and demand rising before 2021,” shared Turaga. “So this approach of cutting just drilling and not completion of wells in inventory is insufficient—they need to go beyond and have a material impact on production volumes.”

ADI Analytics is running several forward-looking models, including one that suggests US shale players need to cut as deep as 2 million B/D from year-over-year production. Such a dramatic reduction would be needed to keep oil prices from remaining locked at marginal cash costs. “We could potentially get there just with capex declines,” said Uday, “but not all operators will cut capex, so a little bit of shut in will be necessary.”

The US Fracturing Market Is Sinking, But How Low Will It Go?