The US has seen liquefied natural gas (LNG) exports drop by more than half in Q2, coming on the back of ample supply/weak demand fundamentals and a combination of warmer winter weather and COVID-19 mitigation efforts. This sharp drop in US exports occurs as the first wave of US export projects come on line.

The Energy Information Administration (EIA) said daily natural gas deliveries to US facilities that produce LNG for export were a record 9.8 Bcf/D in late March 2020, but deliveries fell to less than 4 Bcf/D in June, according to data by IHS Markit. The EIA added that historically low natural gas and LNG spot prices in Europe and Asia have affected the economic viability of US LNG exports. European natural gas storage inventories for Q1 are already at record levels, according to Gas Storage Europe’s Aggregated Gas Storage Inventory (AGSI+). 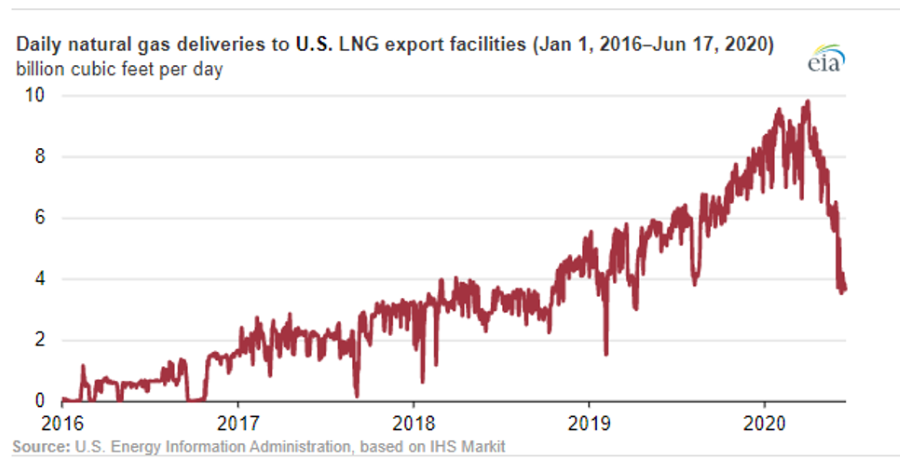 In comparison, EIA said 74 cargoes were exported from the US in January 2020.

These lower export forecasts come as more supply is expected to come on line in the US. Several US LNG export facilities became operational in 2019. Most recently in May 2020, the third train at Cameron LNG in Louisiana began producing LNG, while the Freeport LNG in Texas began commercial operations. Later this summer, three of Elba Island’s small-scale moveable modular liquefaction system units are expected to come on line, bringing US total liquefaction capacity to 8.9 Bcf/D of baseload LNG export capacity and 10.1 Bcf/D of peak export capacity. 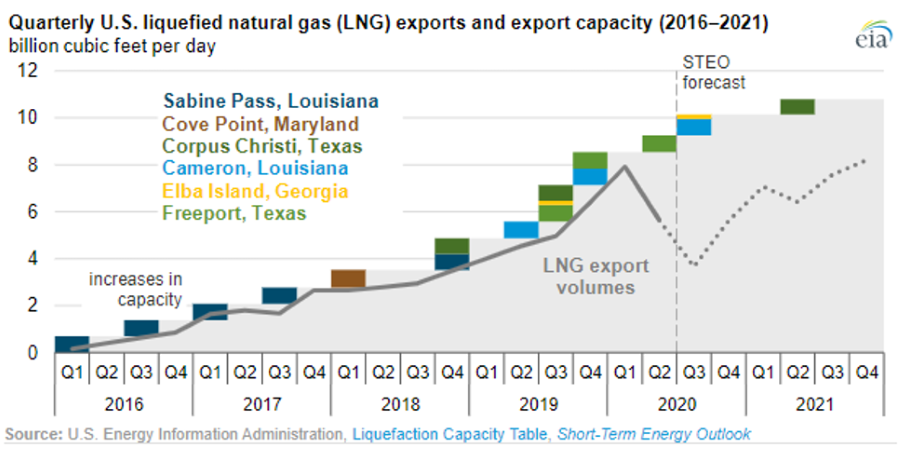 But even with a slowing global economy, supply is still long.

“There would have been too much LNG in the world even without COVID-19,” said Ben Chu, director of equities, LNG and proprietary at Wood Mackenzie’s Genscape service. “COVID-19 has made it worse.”

Wood Mackenzie’s Americas Vice Chair Ed Crooks said in a recent opinion piece that US supplies are the quickest to respond to changing market conditions amid a worldwide glut.

Crooks added that most US LNG is sold under contracts that have a fixed component for the liquefaction capacity, which must be paid for whether or not it is used, and a variable component for the cost of the gas, which is generally linked to Henry Hub, and which is payable only if a cargo is produced.

Most offtakers of US LNG can cancel unwanted cargoes under the terms of their contracts and when prices at destination do not cover the variable costs of production and shipping, which is what Crooks said many market participants are doing.

They cancellation of US cargoes may demonstrate strength in the US commercial model, not weakness, according to Texas LNG CEO Vivek Chandra.

“The beauty of the American model is that it’s more flexible,” Chandra said.

Chandra noted in a recent webinar that cargos bought from markets outside of the US often include a full-cycle amount, which can include shipping, liquefaction, and pipeline cost. Because those extra costs are not visible to the buyer, and cannot be broken down, Chandra said buyers are less likely to cancel cargoes bought outside the US.

Crooks agreed that US LNG supplies are more flexible, adding that any gas not wanted as LNG will find a home elsewhere in North America.

“Total long-term costs for US LNG are competitive on a global basis, and the ability to make decisions on shipments month by month is attractive to some buyers,” Crooks said.

“This flexibility could be a way of selling US LNG. It demonstrates that buyers have more control,” said Alex Munton, Wood Mackenzie’s principal analyst for Americas LNG. “It’s not a killer blow.”

Seadrill is seeking options to restructure its $7.3-billion debt. The offshore driller previously emerged from Chapter 11 bankruptcy protection in 2018.