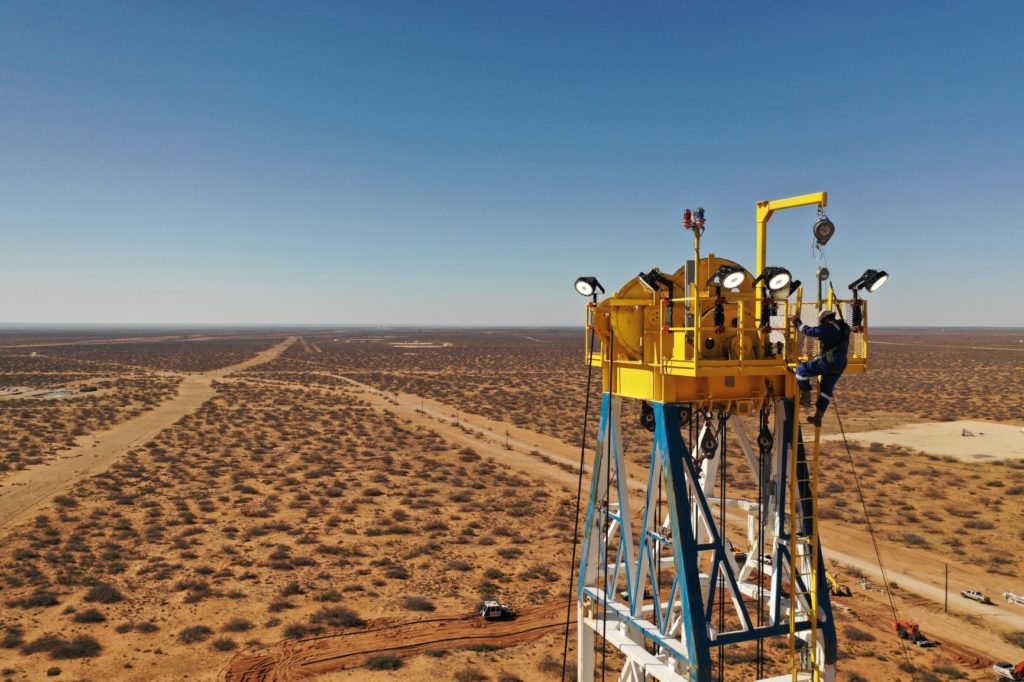 A worker climbs down the mast of a drilling rig in the Permian Basin. Source: Shell

In a year defined by a historically harsh oil-price crash that rippled with collateral damage across the industry, the most-read JPT report of 2020 was about a well so different, it needed a new name.

It was a strange solution, devised to deal with a tight drilling section.

But the level of interest in this single experiment speaks to the promise of innovation and the sometimes amazing problem-solving capabilities of petrotechnicals.

We also saw more evidence this year of how those problems can transform into a deeper understanding of the industry’s core disciplines.

Frac hits, or fracture-driven interactions, serve as a prime example.

A few short years ago, they were a source of fear and confusion. Today, a new branch of subsurface diagnostics has unraveled many of the surrounding mysteries and enabled operators to know when the well-to-well events are hurting, or in fact, benefiting production.

There were other important developments covered this year, some just emerging while others appear to be taking a firm hold—enter the “energy transition.”

As we head into 2021, here’s your chance to look back at some of the most-read JPT stories about the ideas that have reshaped the upstream business over the past year.

Why Shell Drilled a Horseshoe Well in the Permian Basin

In a pure demonstration of innovative thinking, engineers in Shell’s US onshore program drilled a well that no one in the shale sector had ever seen before. After drilling a lateral section out for 5,000 ft, the bit slowly turned 180° and then went straight back toward the rig for another 5,000 ft—essentially creating two lateral sections. Dubbed the “Horseshoe Well,” it required no new technology to drill or complete. Heads across the shale business turned to the project because it offered a new way to lower the cost of developing areas where long-lateral drilling is constrained.

What is the Future Demand for Petroleum Engineers?

Early in the year, before a pandemic-driven price crash, a story raised the question: What will the future look like for petroleum engineers? It relied heavily on a research paper by 2016 SPE President Nathan Meehan, which predicted a significant change in what engineers do and the number needed to do it over the long term. Based on what has happened since, it looks prescient.

Inter-Well Relationships Are Messy, But That Can Be a Good Thing

The assumption that fractures in one well should not reach out and touch others is looking suspect. Extensive data gathered at ConocoPhillips’ test site in the Eagle Ford concluded that long, overlapping fractures add productive pathways in areas that would otherwise be missed. The insights from that paper are leading companies like Devon Energy to measure and maximize interaction.

Drilling automation has advanced to where we are “in the beginning stages of it.” The assessment was offered by Paul Pastusek, drilling mechanics advisor for ExxonMobil, who laid out what it will take to move ahead, from a standard code for sending data uphole using mud pulses and installing machines capable of inspecting pipe threads.

As a result of the global energy transition, interest in geothermal energy systems is soaring. The area has been stymied in the past by perceived high costs and a general lack of awareness. However, these roadblocks to adoption are eroding. A number of industry experts and new developments suggest that we are entering the “Geothermal Decade,” which could pave the way for the oil and gas business to use more of its native expertise to develop alternative energy.

The steel casing run down horizontal wells is robust, but it has limits. Unconventional oil and gas producers around the world have learned this lesson after suffering from issues ranging from slight deformations to breaches several inches wide at multiple points in the lateral section. These downhole casing problems are multifaceted and sometimes hard to detect. Engineers are unraveling the root causes, though, and have delivered several SPE papers with further insights following this report.

Depleted reservoirs around the world have the potential to address the world’s growing concerns over emissions and climate change. Pumping enough CO2 back into these geologic storage sites would even enable producers to begin marketing carbon-neutral fuels. Whether this pans out will hinge on the industry’s ability to invest more into enhanced oil recovery via CO2 injections. EOR has traditionally found itself on the sidelines during periods of depressed oil prices, but today there are new incentives to expand such projects at an unprecedented scale.

The black gunk coming out of oil wells may no longer be a mystery. For years these “gummy bears” bedeviled Oklahoma producers who were pretty sure the problem had something to do with fracturing chemicals but had no explanation as to why. Finally, a paper explained that the prime culprit was friction reducers reacting with the fluid in the iron-rich reservoir, which raised the next question: What other chemical reactions are going on down there?

The world’s largest oil company is so because of its vast and highly permeable conventional fields. However, a big part of Saudi Aramco’s next chapter lies in its bounty of tight reservoirs that are just beginning to be earnestly developed. Aramco has spent years studying their potential and how best to deploy unconventional technology. Now it has its first wells flowing and recently approved a $110-billion development of tight-gas resources near the supergiant Ghawar oil field.

Macondo Changed BOPs, But There Is a Limit

The Macondo disaster inspired a wave of ideas on how to ensure that when all else fails, the blowout preventer will prevent the worst. Since then, major changes have been making subsea BOPs more reliable. But it is still essentially a hydraulically powered guillotine.

While it is one of the top producers of liquid hydrocarbons in the US, New Mexico is also among the driest. The issue has culminated in a restriction on new freshwater leases issued by the state and a push for more recycling of produced water.

The Texas oil and gas company will trim its carbon footprint in the coming years by building on a low-carbon investment that already totals more than $10 billion.

What is to become the largest shale producer in the Permian Basin is stepping up its efforts to curb emissions and has shared new details in its annual sustainability report.